There is no doubt about it, this was an epic trip.

Certainly, anyone sitting in Yellow during the first dive at the moment when we had an unexpected visitor is unlikely to forget it. The pair of divers who were still in the water at the time – Clarissa and Martin – certainly won’t.

For me, the second dive was also unforgettable, but for very different reasons. More on that later. 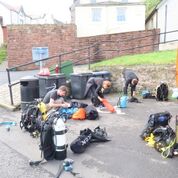 St Abbs is a tiny fishing village just over the Scottish border and a few miles up the road from Berwick upon Tweed, where we were staying. It’s home to the UK’s oldest marine nature reserve, which covers 8 km of the Berwickshire coast from Eyemouth in the south to St Abb’s Head in the north. It’s also one of the most popular shore diving sites in the UK.

Yes, Slut Rocks.  No idea why, but most people know the dive site itself by its other famous name, Cathedral Rock. CliDivers on this trip also now know it as ‘whale territory’. 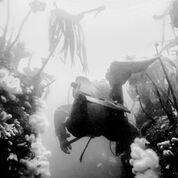 St Abbs’ sheltering harbour walls belie the best efforts of the North Sea on the other side of the brick divide to disrupt dives and divers, sometimes spectacularly successfully. Underwater, the scenery abounds with rock gullies, tunnels and arches, chock full of a wide range of marine critters, with vaulting, red sandstone walls covered in dead man’s fingers, sea urchins and starfish and topped with kelp forests.

All of our dives were near the shore and at a maximum depth of about 25 metres, though most were between 10m and 20m. The water temperature was a notch or two up on what it had been during the Winter Warmer in March off the Plymouth coast, when it had hovered around 11C, but only a notch or two. Visibility was generally good – maybe 10m – or it was until the current decided to lend a hand. 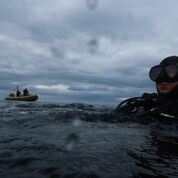 It was a blustery, showery day as we tootled around near the shore at the start of the most eventful of our three days’ diving. The plan – as it was broadly for all five dives – was to explore the rocks, walls, gullies, tunnels and other dark places and hunt for the multitude of sea life clinging to this aquatic, volcanic playground (the rocks around St Abbs are mainly red sandstone and the results of volcanoes spewing up their guts millennia ago).

Despite being a Sports Diver, I’m still something of a novice when it comes to both drysuit and UK sea diving (this was only my second trip and sixth-ever UK drysuit dive), so I’m still in ‘learning the ropes’ mode. Which meant that, to me, the sight of rock walls and floors covered with brittle stars (a new one to me), various types of starfish and sun stars, and wafting dead man’s fingers both rocked and floated my metaphorical boat.

With two coxes on the actual boat – Phil and Eleanor – the plan was for everyone to buddy up and have Eleanor get in the water first so that she’d be back on board in time for everyone else to dive including, lastly, Phil and his buddies, Clarissa and Martin.

I was in one of the last pairs, buddied with fellow Sports Diver Marysya. We spent a very easy-going 46 minutes pootling around at 15 metres getting the lie of the underwater land before scrambling back onto Yellow.

Just in time for one of the most memorable bits of action anyone on board – or indeed still under the water – had ever seen. 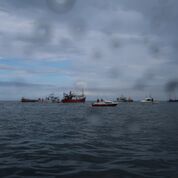 In the minutes leading up to this epic event, our attention had been taken by an ever-growing and increasingly varied crowd of boats and vessels all gathering some couple of hundred yards from the harbour wall. Closer inspection revealed what looked like people dressed for a wedding on board one boat, with one girl in particular singled out as the obvious star of the day.

We later learned that the party atmosphere was thanks to this being the Eyemouth Herring Queen Festival (the 75th, no less), an annual event that stemmed from a peace picnic after the end of the First World War, and which was introduced to the St Abbs area by Eyemouth’s harbour master in 1939. The girl we’d spotted had just been crowned ‘the Herring Queen’. Lucky girl!

What they would have seen had they been looking
Image: Scottish Natural Heritage

At this stage, none of us had a clue what was going on, but it was a fabulously unusual sight that drew our eyes and meant that everyone on board Yellow was gazing at the never-to-be-forgotten moment when, less than 10 yards away, the waters parted and a minke whale’s head and back began tracing an elegant, apparently slow-motion arc out of the water. It was back below before the surface before any of us had really recognised what was happening. 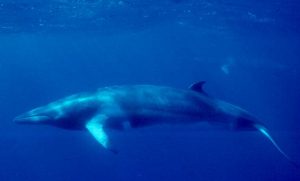 That was on board. Below the waves, it was a different matter altogether. Like me, Clarissa and Martin were also pretty new to UK sea diving. In fact, this was their first-ever UK dive. But what a dive. As they prepared to ascend, a huge grey shape appeared out of the gloom above their heads. No, not their buddy Phil. It was our friend the minke, just popping round to scare the living crap out of our intrepid pair of newbies.

We were all still metaphorically flying from the whale encounter when Dive 2 brought us – particularly me and Marysya – back to sea level with a bump. Possibly I should have read the runes better and recognised my rather violent sea sickness just before getting into the water as a red flag, but I actually felt fine as Marysya and I buddy checked.

The second we reached the sea floor we were hit by the power of the current. It wasn’t long before Marysya decided to put up her DSMB to let the boat know that we were drifting, but it also wasn’t long before she had to let it go, as she was being dragged up to the surface.

Back on the surface, Phil and the rest of the guys in Yellow saw the DSMB surface but then quickly realised there was no diver on the other end.

Under the water, as best we could we clambered over rocks at the bottom to slow everything down and get on top of this dive, but after only a few minutes we both decided it would be better to cut our losses and go up to the surface.

What Matt would have seen if he’d had an SMB
Image: Niovi Antoniou

Which was when the significance of the fact that I’d left my DSMB in my car sank in. Yes, really.

We came up as slowly as we could, unable to signal our ascent, to find Yellow about a quarter of a mile away already hunting for its two lost divers. With no other DSMB to show our position, their only option was to make slow arcs of the water searching for us.

Luckily for us, another dive boat was only fifty yards away and came over to pick us up. Yellow then came over and we swapped boats. Both of us were fine, although we spent an hour or so on oxygen just to make sure following our too-rapid ascent. That gave me plenty of time to mull over the potential ramifications of going diving without a DSMB.

So, this was a trip on which I learned a valuable lesson the hard way. Something I already knew in theory from my training had just become an all-too-much of a practical reality.

I guess that’s called ‘experience’. All round, it had been quite a day. 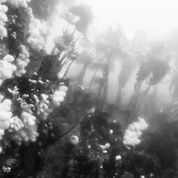 Inevitably, the next two days struggled to live up to the drama of the first. While both involved plenty of fabulous diving in stunning surroundings – both above and below the waves – there was nothing quite as exciting, memorable or daft as on Day One.

That said, we did catch sight of a pair of dolphins during our two dives on Day Two – Big Green Carr/Amphitheatre and Black Carrs – but by Day Three the weather and wind were getting worse.

After much deliberation following the morning’s dive – Tye’s Tunnel – and the RIB dipping in and out of the relative shelter of the rocky coves, Phil pulled the plug on the final dive of the trip. The wind was just too strong and we turned around, making for the harbour and a cuppa.