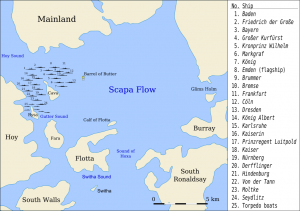 21 June 1919 – “Paragraph Eleven of to-day’s date. Acknowledge”. So began the scuttling of the entire German High Seas Fleet at Scapa Flow in the Orkney Islands.

The journey up to Scapa takes two full days from London, driving up to the very top of Scotland and then taking a ferry even further. When everyone had rendezvoused at our guest house for the week we still had good light. despite the late hour. By 11pm, Yellow had been launched and put to bed, and Clidive quickly retired to the Flattie bar. This would be our second base for the week – a bar populated entirely by scuba divers and boat skippers, and serving locally brewed Scapa Special – it even has a battleship on the glass. 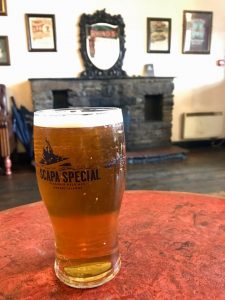 The most topical of pints

Unfortunately, Sunday morning saw some mechanical issues with Yellow, limiting the diving potential. Not to waste a day though, we set out in the cars for a drive around the Churchill Barriers. These causeways linking the islands were built in the 1940s after the deadly sinking of HMS Royal Oak by U-47 showed the existing blockship system was inadequate.

As we drove along the road, we were looking out for the various metal structures sticking out of the water. This is now all that remains of the purposely sunk blockships from WWI and WW2.

After selecting a platform with a winch on the top that was diveable in the prevailing wind and not too far from shore, two of us decided to give it a go. Wearing more kit than is usual for a 6 metre shore dive, we spent half an hour watching nudibranchs and pipefish and swimming through the open structure with the light rays shining through the roof. Back home, some thorough research identified the site as the AC-6 FC Pontoon – a decent little dive, but not what we had come here for.

Monday saw diving beginning properly with dives on the light cruiser SMS Dresden, the minelayer SMS Brummer, and the only WW2 wreck in the sound, the KMS F2. These were chosen as ‘shake-down’ dives before the deeper battleships later in the week, but, this being Scapa, a shake-down still took us down to 35 metres.

A highlight for me was the stern of the Dresden, where both the kedge anchor and a deck gun were visible, creating a bit of a traffic jam as cameras were readied. Towards the end of the first dive, we had a nice surprise in finding a German Naval Jack tied on to the wreck. These had been added as part of the centenary commemorations, and the rest of the week was spent trying to find the flag on each wreck.

Tuesday saw a dive on the SMS König, the first of the three remaining battleships. Each battleship had turned turtle as they sunk, flipped round by the weight of the guns, and now lying upside down. The unbelievable scale of these fighting ships became apparent as we descended to the keel in 26 metres, with another 14 metres of battleship below us and spreading off in all directions.

In the afternoon we dived the light cruiser SMS Karlsruhe. The shallower depth combined with a strong tidal flow meant this wreck had the most life out of any of the dives. Parts of the wreck were carpeted in thousands upon thousands of brittle stars and on our safety stops several lion’s mane jellyfish floated past.

Midweek saw us diving the second battleship and the deepest wreck in Scapa Flow, the SMS Markgraf. Phil and Nick had spent their life savings on a trimix twinset fill to allow for a 90-minute run time.

The rest of us aimed for the ‘gun run’ – down the shot to the upturned keel at 25 metres, then down the side of the ship to the seabed at 45 metres, then parallel to the wreck – ticking off as many of the seven lined up casement guns as the plan would allow. It was a bit eerie, the end of a 15 cm gun barrel emerging from the darkness; and as you approach the entire turret coming into view, hanging upside down from the ceiling above you. Definitely my favourite dive of the trip.

We completed the trio with a dive on the SMS Kronprinz Wilhelm, again ducking under the deck to find the even bigger 30.5cm main deck guns lying on the seabed. Then it was along the side of the wreck to the rudders before a gentle swim back over the soft coral-covered hull.

We also had time to fit in a second dive on the Karlsruhe, taking a slightly different route that allowed for some light penetration towards the bow. Once again the wreck was covered in life, with several kinds of crab found throughout the dive.

The remainder of the week focused on ticking off some of the objectives of the Scapa 100 expedition, while also working our way through the remaining ships. Having collected some specialist underwater cameras from the BSAC team and both remembered to charge them and bring them on to the boat, we set about videoing parts of the wreck to turn them into 3D photogrammetry. Both the gun on the SMS

V83 destroyer and sections of BSACs sponsored wreck the SMS Cöln got the treatment. All the various BSAC clubs on the wider Scapa 100 expedition were to focus on the Cöln, with an eventual plan to get a 3D map of the entire wreck (results still pending but keep your eyes peels at Scapa100.org).

Secondary objectives met and all seven warships dived, we retired to Flattie’s for a few last topical pints, hitting the town in our brand new expedition shirts. And we definitely completed the main objective of BSAC’s Scapa 100 expedition – to go diving.

If you want to know more about the wrecks of Scapa Flow, this website is a good place to start: scapaflowwrecks.com 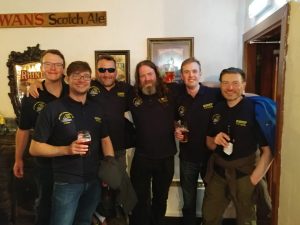