Home › Dive Trips › The Farnes Get Our Seal of Approval

The Farnes Get Our Seal of Approval

The Farne Islands, located on the North-East coast of Northumberland are high on the ‘hit list’ of many UK divers. 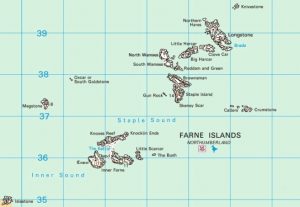 Consisting of almost 30 small islands and rocky outcrops, the Farnes lie a manageable 2-4 miles off of the stunning, windswept sandy coast.

Outstandingly beautiful, the approach by road reveals ever-shifting colour and light as lush green fields give way to high dunes and rocky outcrops under vast skies. The lofty turrets of mighty Bamburgh Castle stand sentinel over this haven for seabirds and sea life, separated into ‘Inner’ and ‘Outer’ by the stretch of water known as Staple Sound. At only 3-5 hours from the South-East by train or car [rather longer if you’re driving the club van and it’s Leeds Festival weekend! Ed], what’s your excuse?!

Why the Farne Islands?

The islands are composed primarily of a rock called whinstone, which is prone to vertical weathering and faulting, with a resulting strange topography of steps and sheer faces continuing below the surface. Walls drop sharply, leading on to gullies which meander into kelp beds and sandy underwater clearings, guarded by huge boulders. Tricky to navigate and commercially fish, the result is an underwater garden with an abundance of life awaiting the curious diver.

Despite wrecks galore and bountiful smaller fauna, for many the main draw of the Farnes remains the ‘puppies of the sea’  – grey seals. With an estimated 4,500 of these fellas in the area (recent Orca visits nonwithstanding!) diving here presents an unusually high chance of a close encounter. And this trip proved to be blessed…

Arrival at the harbour 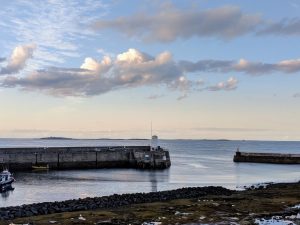 Our trip base, Seahouses, proved lively and lovely beyond its modest proportions.  Back in the 1890’s, as the herring fishery developed, so too did specialist on-the-spot accommodation around the harbour:”Sea-end houses” soon became branded as “Sea Houses” – the (reportedly) ‘malodorous’, ‘down-market’ working community accommodating ‘itinerant fishwives’ among others. The name was finally unified as “Seahouses”.

Things change: nowadays those weathered little cottages of tough grey local stone are in high demand as posh holiday digs for Newcastle’s middle class, and it’s not hard to see why. A harbour master with a proper bushy white beard, a busy and well-supported lifeboat station, historic bad smells replaced by an array of tempting fish and chip shops and wafts of frying donuts on the quayside: we knew we wouldn’t starve!

Charming National Trust and tourist trinket shops sit above high harbour walls… All the town looks to the sea; the protected inner and deeper outer harbour ringed by proper trad pubs rammed with locals and visitors happily mingling, and festooned with brass and heirlooms of seafarers past.

The very popularity and charm of this unique location however soon presented its own challenges to the boat-handling team. 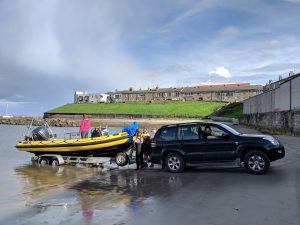 Launching at seahouses (there is a slip too!) Photo: Ian Baker

Yellow arrived overland from St Abbs and found a berth approximately 50 vertiginous ladder rungs down from the dockside. Luckily, the loading quay, with its stone steps, was just yards away. However, despite the safe and sheltered mooring conditions, establishing a reliable ‘ropes-off o’clock’ would prove challenging…

North Sunderland Harbour (the harbour’s proper name) was in peak holiday boat-trip rhythm at the kick-off of a blazing Bank Holiday weekend. Elaine had her work cut out: planning a very full ‘wave’ diving programme, then negotiating loading/offloading divers and gear between the arrivals and departures of bird/porpoise/seal watching boats AND a high count of other dive ribs and hard boat charters at the stone steps was no mean feat. 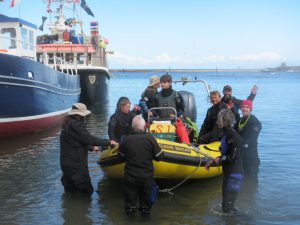 Thankfully we had a crack team of observant dive managers, boat handlers and cox’ns. Whatever this busy harbour threw at us, Yellow flitted between quayside and slipway, hovering where necessary: divers poised to wade in with inflated BCs, ready to float to the boat. Sasha lost his dive boot when waist-deep in water but knee-deep in mud. This fazed him not one bit. In true UK diver style, he plunged head and shoulders under and retrieved the boot, emerging dripping mud shoulder to hand: that’s the Clidive spirit!

(Elaine pointed out this is why we always have our dry suits zipped up – true that!)

Despite these challenges we are proud to report that that, out of nine waves, only two went out slightly late – one unavoidably so, due to the lifeboat launching, and still by under 15 minutes. We’re pretty sure that’s a Clidive record…

Moving on from the harbourside and just 15 mins walk through the village, to ‘the Hides’: specialist accomodation for divers run by a diving family.

Clean, airy rooms with four bunks/beds and a shower, and a large communal kitchen, a sitting and outdoor area and a drying room: we wish all our destinations had such a good-value, practical option available!

Aside from the short walk to the aforementioned  local hostelries (we explored several en-masse and felt the love from the welcoming locals), we enjoyed the traditional divers’ curry night at a local Indian and the Hide hosted an artisanal pizza party on the Sunday.

Our special guest star, Nelly the cocker spaniel, was received with open arms everywhere – indeed we’ve never seen so many dogs in one town: Seahouses may constitute the Crufts of the North!

Other accomodation options in town included airbnbs & the Bamburgh Castle Inn. The hotel was good in many ways – but breakfast starting at 8am won’t suit too many divers! 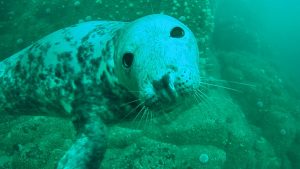 The islands, resplendent with wonderful names such as Nameless, Elbow, Fang and Blue Caps lie only a 15-20 minute motor out. On the way our own vet Mark helped us identify seabirds such as puffins and terns. They were no match however for the real local celebrities: each approach to a dive site provoked fresh excitement on board as scores of bobbing heads and large dark eyes surfaced for a look at the strange long-limbed creatures plunging backwards into their home…

From the 12th century onwards, the grey seals were harvested by the islands’ monks. They were valued because of the oil that could be extracted from their carcasses and also as a luxury food. As creatures of the sea, seals counted as ‘fish’ and so could be eaten on a Friday. In 1378-79 a seal calf could fetch about 22p which works out at about £140 in today’s money. 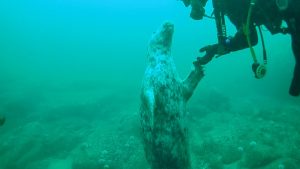 Thankfully today they don’t have to fear us quite so much and the younger seals in particular proved often keen to interact. Most of us had the pleasure of watching their graceful swim pasts and curious gaze at close quarters. Several of us enjoyed the famous fin-nipping game (one was actually so annoyed at us leaving that he hung off of my fin – quite a weight – and then shot off at astonishing speed after the DSMB!).

A few of us were blessed with pups who actively pursued close contact – holding ‘hands’ and face and belly stroking were permitted. Phil even got a big two-flippered hug! Kisses on the mask and gentle mouthing of the hands and hoses were fun, if a bit hairy – and not just because of the whiskers – those are some formidable teeth!

It’s hard to deny the seals are the ‘main event’ in the Farnes, but the variety and abundance of flora and fauna was fantastic. Divers reported:

How we made it happen…

The only way to make such a busy dive trip work was to dive in four waves day one, two waves day two (a challenging weather day) and three waves day three (a few drop-outs due to leaky suits).

Great discipline shown by divers on this trip meant this ambitious programme went astonishingly smoothly. With first wave cox’ns at the boat at 6.45am and ropes off at 7.30am, next-wave divers helped by bringing in coffee (Hat!) and bacon sandwiches (Anastasiya!) to reward the earlies.

Despite last-minute fears around the changeable weather, most of us got sunburned on the Saturday (gorgeous blue skies and azure seas) and windburned and wave-smacked on the Sunday (despite great helmsmanship from Ian and Eleanor) and then a combo of sun and waves on the Monday. Clever dive planning overcame tide, wind and wave, with only Sunday late afternoon called off by high seas. Undaunted, and led by Nelly the Wonderdog, our party hiked the beach to the bright lights of Bamburgh and returned victorious several miles and even more beers later.

Not bad at all for a late summer UK Bank Holiday!