Clidive expedition Scilly Wave 1 is officially operational. Our advance party was a little more advance than originally planned, with Neil and John having to dash down to Penzance two days early to take the boat across before strong winds set in. They made it, but only just. The rest of us followed on by ferry on Saturday morning, enjoying a sunny but blowy crossing, and carefully avoiding below decks, where the mops were out and things were pretty grim. 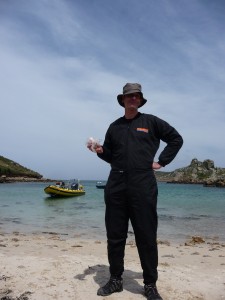 Our first day began with most of the group and two rebreathers being picked up from the beach below the house. Then we charted a careful course around St Mary’s, Tresco, St Martin’s, Tean, St Helen’s and Bryher, up to the north eastern edge of the islands where we hoped to find shelter from the sharp southerly. Our first dive was on the Deep Ledges, which did exactly what they said on the tin, working down in steep walls and narrow steps from 10m to 60m. Despite plankton, the visibility was relatively good and we could enjoy the sheer faces, covered in jewel and plumose anemones, plunging from rocky points into the depths.

Lunch was a picnic on a sheltered, sun-drenched beach on Bryher near the Fraggle Rock café, where the ladies’ toilet was adorned by a signed photo to the staff from Gary Lineker, while the men got to enjoy Pauline Quirk and Linda Robson. Class!

Dive two was rather less spectacular. In a northern bay full of breaking waves, we found some scattered metal that had once been the Mando. Buffeted by the swell, we pootled among huge round boulders at 20m, searching for the 50m wall we’d spotted on the echo sounder. 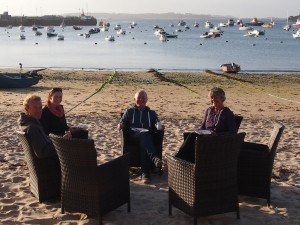 We finished the day with a BBQ, and strawberries and ice cream on the beach, bathed by the evening sun until well past 9pm.

The Scillies are as beautiful as I remember them – far-flung rocks scattered treacherously across shallow seas. White beaches shining as sun breaks through swift-running clouds, or looking positively tropical against green slopes, palm trees and deep blue skies.

We’re already captivated, and it’s only Day One.