Orlando and Mike have very kindly driven the Clidive van, full of tanks and dive bags, up to the Orkney ferry, stopping en-route for tea with various family.  The rest of us fly up and meet at the dive boat for some kit faffing.  The Radiant Queen is beautifully kitted out with two compressors; Oxygen and Helium; pint sized mugs of tea; and a great lift.  The skipper, Emily, is a keen diver and gives the best dive briefings we’ve ever seen.

We regroup at the Ferry Inn for a pint of the local brew, and to watch wasps chase James around the car-park. 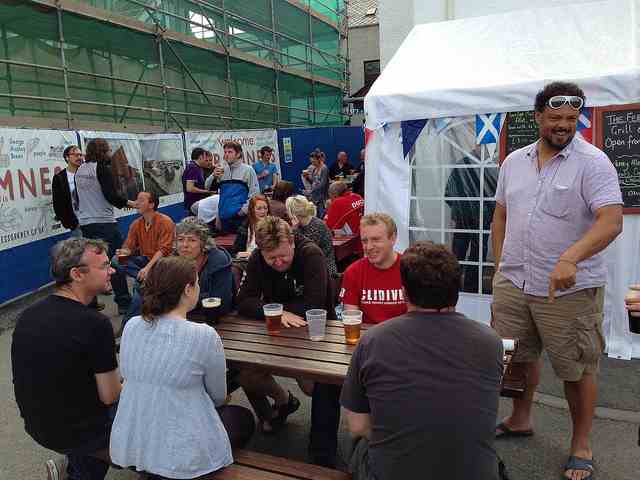 The German navy was interred around Scapa for eight months at the end of WWI, and they scuttled all 74 ships shortly before the armastice agreement.  Most were saved or salvaged, but three dreadnaughts, three cruisers and a mine layer remain.  Today we dived the cruisers Dresden and Karlsruhe.  Both on their sides and a bit broken up.  We’re starting to identify the various features – conning towers, bridges, and 150mm guns. Beautiful weather today.  We start with our first dreadnaught class battleship – the Kronprinz Wilhelm.  These ships are huge – most of us concentrate on the rear third with big guns and some nice rudders at the stern.

The Cöln is another cruiser with intact bridge and conning tower, complete with range-finder sight.  From the bow it’s possible to swim back to the shot through the lower deck – very atmospheric with lots of light. This morning Nick answers his ‘phone with “Oh – is it my birthday?”.  We sing and Emily manages to find a candle from somewhere.

The Markgraf is another dreadnaught with an intact run of casement guns and a nice set of portholes.  The hull is covered in beautiful orange and white anemones.

In the afternoon we dive three shallow wrecks – the British WWII F2, a barge that sank while salvaging from her, and an old wooden dive boat – all very scenic.

Ben from Scapa Scuba collects a load of large scallops for us, which Orlando prepares and Mike cooks three Chinese dishes. We raise a small glass to Nick’s birthday and have a merry time. Thanks to James Pryce, Neil Rickards and Lucy Rickards for the photos.