Diving the Great Wall of Sanday

We were staying in Tobermory in Mull with the intention of diving new sites around the islands of Eigg, Rhum and Canna. The weather had been windy most of the week so we had been stuck in the Sound – though having the wrecks of Rhonda  and the Hispania as fall back is not something to complain about. These dives are all stunning, thick with plumose anemones and covered in fish.

For our last day the weather was forecast as windless so we were keen to get out to the islands. 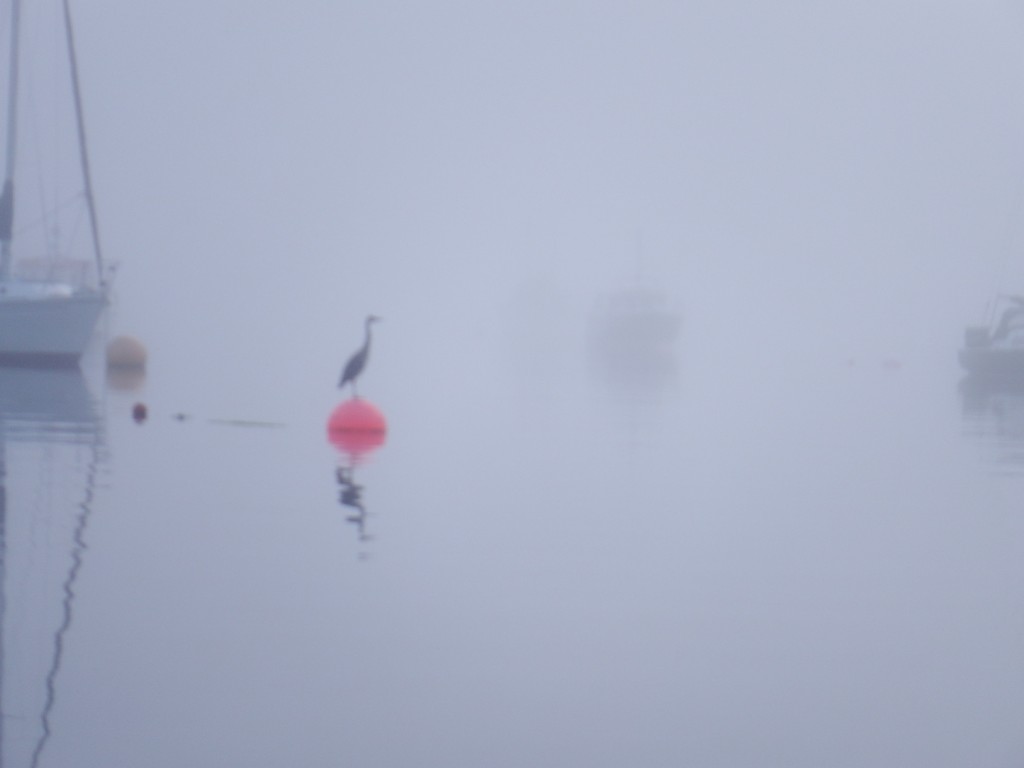 Alas when we woke up the fog was so thick you could hardly see 10m in front of you. Luckily one of our team had lived in Tobermory previously and predicted that we could just drive through it and we would be in the clear at sea. It was an amazing sight slowly driving through the whiteness and breaking out into startling early morning sunshine. Looking back the mists were rolling down the hills and the land view was stunning. 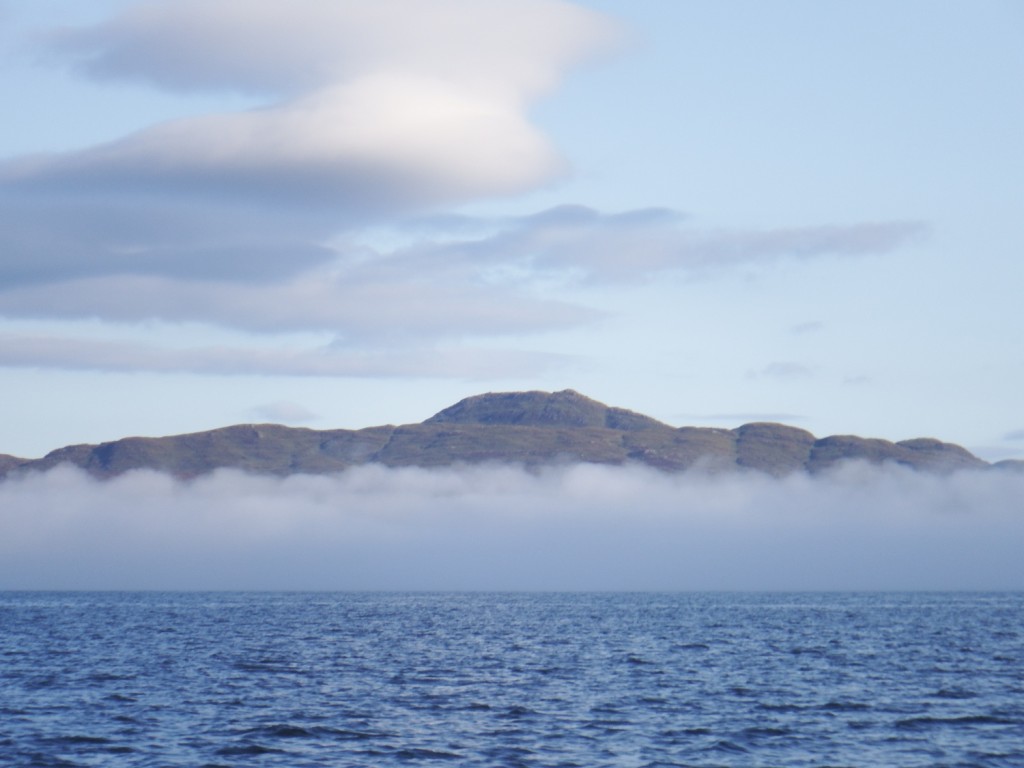 Mist rolling down over the Sound of Mull

We headed for the great wall of Sanday on Canna about 35 miles away. With the sea mirror-calm it only took us 90 minutes  to get there in Clidive Yellow. The dive had to be done on slack water and so with everyone on the boat wanting to dive we needed a very quick turn around to fit two waves within the window. Arriving at the dive site we were pretty shocked to find that the water was thick with small jelly fish. Really, really oily thick, and all different kinds of them. We had never seen anything like it. We had some time in hand, so moved about to check out a few more nearby sites but they were all the same.  Total jellyfish soup.

It was decided that Rory and I would go first. I pulled my hood as much round my face as possible and planned to descend with my hands tight round the exposed skin on my face.  We didn’t know if they would sting and hoped that they would only be in a layer on the top. It was a long way to come and not to give it a try, though it did seem a bit strange dropping into this alien liquid.

Happily, they were only in top few metres and we descended a fabulous wall covered in jewel anemones.  I remember it was the best dive of the week and I totally loved it but what happened at the end of the dive kind of wiped out the precise details from my memory.

After 25 minutes we ascended and reached the kelp line. Every single piece of kelp had several nubibranches living on it. Never seen so many at once. A slug snapper’s paradise.  We could see Ben and Susie also had found this spot and their heads were buried in the kelp.

At 10m we  put up an SMB and ascended  to 6m. We spent a minute swimming away from the wall so it would be easier for the boat to pick up us.  We didn’t have any deco but planned a 3 minute safety stop.

We were just relaxing happily at 6m and I was looking at Rory when suddenly I got a feeling of being caught it a current. This was because Rory seemed to be quickly passing something white behind him.  I wondered if it was kelp or rock I was seeing and thinking slack water has switched off rather abruptly  when suddenly I realised that it wasn’t us that was moving – it was the background. There was something enormous swimming behind Rory – I was looking at the huge white mouth of a basking shark.

I have snorkelled with basking sharks in the past, but there is one thing snorkelling on the surface in the vicinity of a basking shark and quite another to bump into one when not expecting it. I got a very big fright. With my eyes popping out of my head I pointed and Rory turned and saw it too. It seemed to take ages to pass. I normally have good buoyancy control but I had taken such a huge intake of breath on realising it was a shark that I started  floating up and Rory had to hold on to my fin.  We finished the stop and surfaced though the jellies. 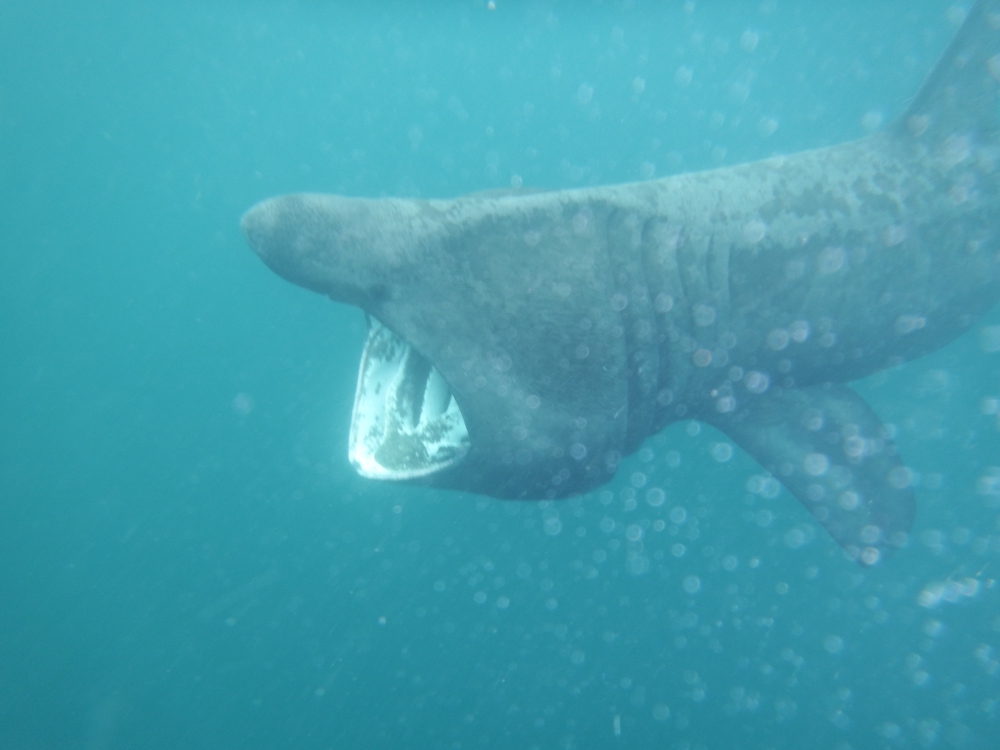 Safe on board I realised what an amazing experience it all was and certainly a lifetime diving highlight to remember.

After the dive we headed over to the remote island Oigh Sgeir for a picnic lunch. The whole island is like a miniature giant causeway with incredible scenery. 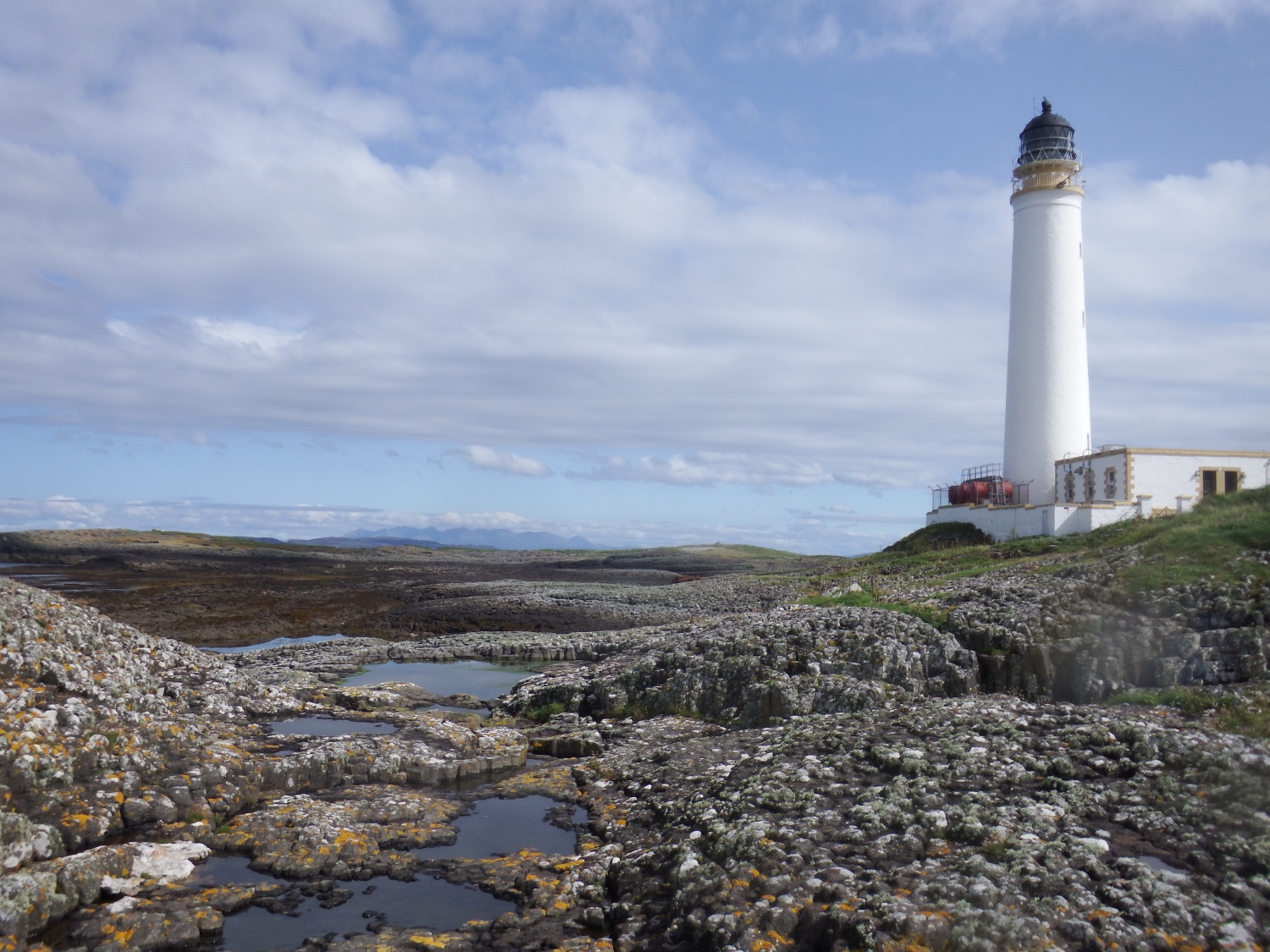 Hexagnoal rock formations make up the island of Oigh Sgeir

We dived with seals and then snorkelled with more baskers.  This was carefully planned so not to disturb them, being with such large creatures make you feel pretty apprehensive which probably a good thing.  Their fins coming towards you in the water are a sight to behold.

Using Clidive Yellow as reference the sharks are about 7 metres long.

We headed back to Tobermory at the end of the day having done a 80 mile round trip in glassy sea. A day to remember. 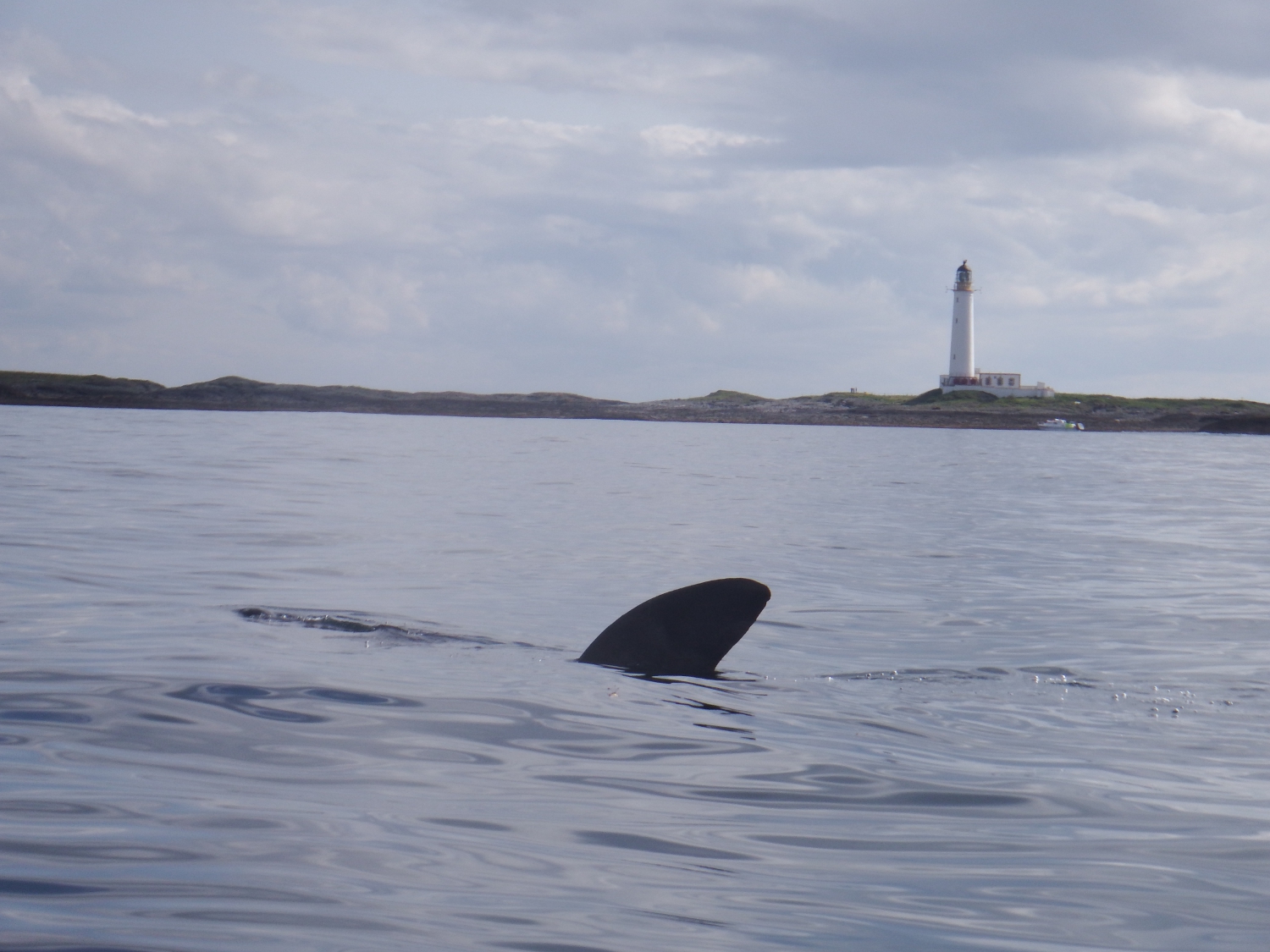 A great fin-ish to the day!