It is with great sadness and not a little nostalgia that we commemorate the life of Eddie Beagley, one of Clidive’s co-founders, who passed away on 24 August 2021.

‘Eddie took up snorkelling in 1953 after reading Hans Haas’ book on diving the Red Sea … In 1956 he joined Kingston Branch where he enthusiastically took to scuba and just a year later took part in an expedition to the Mediterranean. For several years from 1958, he was an instructor on the Central Council for Physical Recreation courses run by BSAC, which gave a first taste of diving to many and introduced Eddie to Brian Booth, a BSAC National Coach.

‘In the late 1960s, the Central London Institute (CLI) wanted to start an adult education evening class for scuba. Brian Booth developed a course and he asked Eddie to be the other instructor. It proved very successful and in 1969, after Eddie took over the running of the course from Brian, he decided with the rest of an original Diving Dozen to create a special branch of BSAC to offer adventurous diving to CLI students once they had finished their evening course. It was the start of the adventure for Clidive BSAC 410.’

Eddie as a young man was 6 feet tall, well built, with a shaven head. He was my friend. 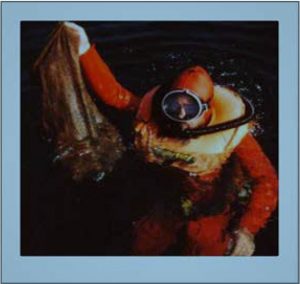 I know little of his early life, but will tell you what I know. He trained as an engineer and became a toolmaker at the beginning of World War II. Eddie tried to join the forces but was refused on several occasions because he worked in a ‘reserved occupation’ [i.e. his skills exempted him from call-up]; but, due to the heavy losses in the RAF, he was finally accepted as a bomb aimer gunner.

He was sent to South Africa for training and on his return to the UK, he was posted on Wellingtons to coastal command, as was often the case for people in reserved occupations. He then spent two years chasing German submarines in and around the North Sea and Scotland. He once said he must be “the only bomb aimer in the RAF that’s never dropped a bomb”.

After the war, back as a tool maker and with a young wife and children, his escape after the exciting days of flying was scuba diving, which all of us in Clidive should be glad about. In 1965, Eddie got a diving job. With a sabbatical from work, he was hired as an extra in a film – Thunderball, filmed at Pinewood studios. He played various parts including doubling up for James Bond. At the end of the filming they collected all the gear, especially the orange wet suits. According to Eddie he found James Bond’s spare orange wet suit, and there are several pics of Eddie in an orange wet suit in the club files!

He was a tough character who inspired me with his diving tales and tall stories when I met him in the 1970s. He was one of the founders of Clidive back in the early days when you made your own equipment. Oxygen cylinders salvaged from scrapped WWII Lancaster bombers with propane gas valves strapped to your chest. Masks made out of lorry inner tubes clamped around a piece of glass (not safety glass, I might add). Weights made in moulds on the garage floor (don’t ask where the lead came from!). No life jackets or buoyancy control, just a hard swim for the surface!

Eddie heads off with intrepid Clidivers on the Black Pig

No wet suits, but woollen sweaters dipped in a rubber solution. Eventually, neoprene sheeting became available (known as ‘shark skin’). You would lay it out on the floor and lie down on top of it, and someone would draw around you twice with chalk and glue the edges together with contact glue – hey presto a 4mm wet suit!

Shore diving was the norm in the early days, but with a bit of help Eddie got hold of a roll-up inflatable boat – known as the Black Pig – with a 9 horse power engine [by way of comparison, Yellow boasts 250HP!]. It would take 2.5 hours to motor to the James Eagan Layne! We had no money and when the Black Pig had had its day, Eddie built the club a new inflatable from a kit. He also acquired a bigger engine – a Chrysler 20HP outboard.

This is the man who taught us all to dive, as his skills and standards were passed on from generation to generation. He inspired people to greater adventures inside the BSAC and to progress through the levels; but to progress with experience and not just aim for the next badge. Eddie nearly threw me out the club for going to Scapa Flow with Rory and Malcolm, due to our limited experience. He relented with the thought that if we came back alive we would be better divers, and he was right. 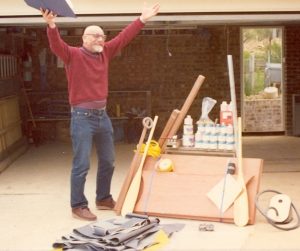 ‘Diving for the masses’, was one of his many aims – to get people from all walks of life into scuba diving – and he succeeded, not only through the training, but financially as well, by keeping the costs low. Equipment hire was a £1 per item and we were encouraged to lend our gear out to others. When I joined in the 1970s, members included a stockbroker, a postman, engineers, accountants, secretaries – a whole spectrum of people from all walks of life. Another of Eddie’s and Roger’s expressions was ‘diving is a great leveller’, and the stockbroker and postman were great diving buddies.

In his late 50s/early 60s he discovered skiing and went with other Clidive club members on holiday – a new sport to conquer.

John Cunnington remembers: “I met Eddie for the first time at the airport for our first skiing trip. We went to Westendorff, Austria, for three years from 1976 to 1978, I think. One tale I remember on our first trip was when a group of Dutch yobs were causing trouble in a bar so Eddie and Roger decided to act. They both leapt up from our table and took the whole lot out through the saloon type doors. Very impressive it was but Eddie sustained a dislocated pinky which kept popping out for the rest of the holiday. They were the funniest holidays I ever had – we didn’t stop laughing from start to finish. 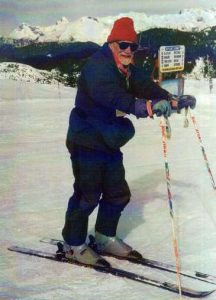 You’re never too old to take up a new sport

“Eddie eventually took redundancy and moved to Canada, and continued skiing up until his late 70s. He tells a lovely story of skiing in America and having a bad fall. He got back with help to his pick-up and drove 80 miles back to Canada, as there was no health insurance in America. He went to the first hospital and was diagnosed with a broken leg. He was 76!!”

He was a good judge of character and very good company to be with. If something went wrong this was the man you wanted in the boat with you! A quick and active mind with a dry sense of humour that would leave you holding your sides in pain and laughter. His knowledge of diving from the early days was legendary, and his problem solving techniques out of this world. He wrote a book  – and inspired me to do the same – about his early days. It was unpublishable for libel reasons, but he asked me to try and publish it later.

Anyway, that’s a brief description of Eddie Beagley’s life and Clidive as they were – and are still – intertwined. I hope this give you some insight into his full and varied life. There’s so much more – another book maybe? 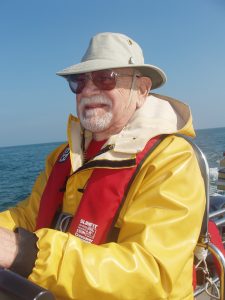