Home › Dive Trips › From the archive: The most fun you can have in your thermals

From the archive: The most fun you can have in your thermals

I recently came across the text of a trip report I wrote in February 2009 – too long ago to still be on the Clidive website, but very appropriate given the weather we’ve just been experiencing. Enjoy!

“Golly”, said Olli, “These Swiss chaps are awfully nice, considering how foreign they are.”

“Yes”, said Chris, thoughtfully, twirling a long golden tress around his finger. “Who would have thought they’d let me wield the chainsaw?”

By the time the four chums got back to the chalet, their noses and cheeks were glowing brightly and their eyes were shining at the thought of hot wine and fondue laced with little rubbery Haribo sweets – a well-known gourmet Swiss dish.

Taken from:  Four Enjoy High-jinks in the Snow, by Edni Blotyn

Olli, Chris [Wilson], Nick and I were the only CLIDivers to leap at the chance of a weekend’s ice-diving near Geneva, organised by Philipp Marty. I really can’t think why everybody else preferred the idea of Egypt in January…But this trip wasn’t just about ice-diving. As we sat at home in Hackney savouring a brandy on the Sunday night, we realised we’d packed more new experiences into one weekend than most people manage in a year.

Having negotiated the icy road to a small car park above Les Mosses – an hour and a half’s easy drive from Geneva – we were issued with plastic snow-shoes and a pair of poles, and pointed in the direction of a mountain.  Or rather, most of the group were, leaving Nick and me to wait for more snowshoes to arrive.  “Lac Loison is just up there and round the corner”, we were told as the group set off up the snowy track, followed by expedition organiser Rudi in a large, tractor-like snowmobile loaded with all our kit.

An hour later, our shoes arrived.  The sun shone, the snow sparkled, and I got a call from a friend asking if she could pop in for a cup of tea.  “Sorry, no – I’m up a mountain in Switzerland”, I replied, nonchalantly. 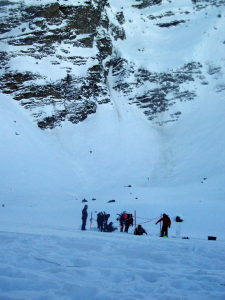 I won’t pretend the climb wasn’t hard work.  The altitude left us breathless very quickly, but we also recovered quickly when we stopped.  Which we did often, just to admire the amazing views, you understand.  We swooshed (technical term) to the sound of crunching snow and my complaining lungs, climbing 200m in an hour.  Finally, we rounded a bend to see a chalet-style building, a ring of mountains and the shape of a small lake obscured by deep snow.

After a hearty pasta lunch, Rudi did a long dive briefing in incomprehensible Swiss German accompanied by wild gestures, and greeted with much laughter from the 20-odd other divers.  Philipp’s version for the Brits took about three minutes and was to the point:  kit up and buddy check indoors – your regulator will freeze if you test it in the open air; you’ll be buddy-line-clipped to an experienced ice-diver who’ll be clipped to a surface line; if your kit freeflows, turn it off and wait in the water for it to defrost; the people on the line can pull you out in seconds, but have never had to; have fun. 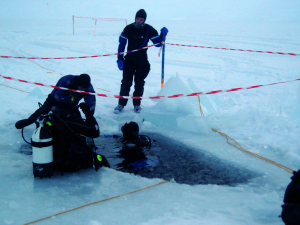 30 minutes later, Nick and I were crunching our way down to the ice.  To my relief, it was covered in deep, fresh snow, and totally unslippery – I don’t do slippery, particularly when fully kitted.

Three triangular holes had been cut in the ice and marked with safety tape to prevent unsuspecting skiers taking a dip. At each one, a couple of divers supervised the safety line, paying it out slowly and trying to stop it freezing into coils or getting trapped on giant ice cubes caught under the surface.

A couple of experienced ice-divers – Philipp included – stayed in the water and took the ‘novices’ down one by one.  And novices was about the word for it!  Submerging gingerly in unfamiliar gloves and thick hood, holding the buddy line away from my kit, unsure if I had the right amount of weight and worried about the cold, all my diving experience flew out my exhaust valve.  Keeping only a few feet below the ice, we slowly moved away from the hole.

Discovery No1:  When the air temperature is -14C, water at 2C feels warm!

Discovery No2:  You need neither fish nor topography to find your surroundings fascinating.

Discovery No3:  When your mask suddenly floods with water in unfamiliar circumstances with no easy access to the surface, it’s easy to panic.

Discovery No4:  Signalling to your buddy as if you’re hitchhiking is not the way to indicate you want to go back to the exit hole.  ‘Up’ is up, regardless of the direction you have to go in to get there! 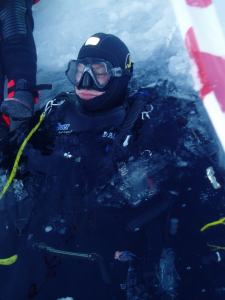 Order restored, my first dive was a good 20 minutes long, during which time I failed to get cold, failed to walk upside down on the ice and generally decided I was having a GOOD TIME, but that that was enough excitement for one day (so no thanks, I wouldn’t have a second dive that afternoon).

Hot wine, fondue and snow angels under a full moon…

…says all you need to know about that evening. Except to say that the Swiss really were very jolly, very impressed that we’d come all the way from London for this experience and even more impressed by our impeccable indoor buddy checks.

Following a fairly sleepless night in an overheated dormitory, Sunday dawned crisp, clear and full of the sense that having got through the learning curve, we could now relax and enjoy ourselves.  Nick and I were allowed to dive together this time, and we enjoyed two 15-minute dips in the dark, clear water.

The light shone dully through the ice, creating a mysterious and somehow fascinating gloom.  We managed to take pictures, avoid getting tangled in the lines and generally enjoy ourselves, with only slightly chilly lips to suggest that we were in near-freezing water.  How come Guildenburgh was never this much fun?

In between dives we sat on the edge of the hole, feet in the water to keep them warm, and laughed at the way everything froze – gloves, hood, mask straps – within minutes.  As divers emerged they were pulled from the water like ungainly walruses, invariably serenaded with seal honks and more laughter (NB is it the altitude or the Swiss temperament that makes everything so funny?). 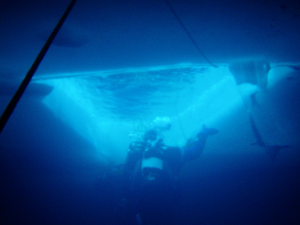 Our only regret was that we finished diving before 11am in an effort to make it OK to fly that evening.  This meant that we missed the 45-minute window during which the sun rose above the mountains and shone fully on the ice.  Other divers’ pictures were spectacular!

Nick and I were very lucky – our equipment performed perfectly, despite being theoretically ill-suited to such temperatures. Chris and Olli were less fortunate and struggled frustratedly with free-flowing regulators, errant ankle-weights and disappearing weight-belts. Philipp performed heroically throughout, patiently taking us all through our fumbling initiation and various kit problems. 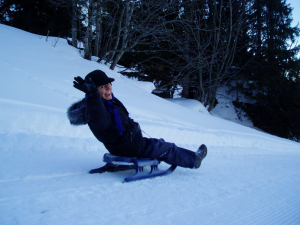 After another hearty lunch and a couple of beers, all the kit was loaded back onto the snowmobile. And then came the icing on the cake! We were each handed a small sledge and pointed back down the mountain track.

As a southerner who doesn’t ski, I’d never been on a sledge before. 10 minutes of mad twisting and turning later we reached the car park, hysterical with laughter, covered head to foot in powdery snow and wishing we could climb back to the top and do it all over again.

I hope this has given you some idea of just how much fun you can have in a cold climate.  Forget the Red Sea and invest in some thermals!

Thermal tops x 2 + normal quilted undersuit under a 4mm compressed neoprene drysuit (actually, no more than for Weymouth at Easter).