“Finally” was the word on my mind as I headed to Victoria station Saturday morning. The other word was: “Oh God what have I got myself into?”.

It was my first UK sea dive, and my first ever boat and drift dive, and I had been excited by the prospect of this day for many months but also had been quite anxious. The idea of being dropped in the middle of the sea was not something I was particularly looking forward to. I tend to have an overwhelming imagination and can sometimes have illogical fears of the horrid dangers that could be beneath me while I float helplessly in the middle of the sea. I blame Jaws. 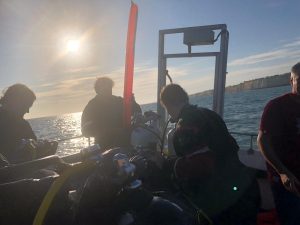 So a lot of pressure on Newhaven for me as, like for many others, this was my only trip of the year (the first one barely counting as it was only one training dive in Wraysbury – no offence to the Wraysbury fans out there). Luckily, the trip was blessed with amazing people and good weather. The first being so much more important than the latter! You can survive a storm with great people but can rarely survive a nice sunny day with horrible ones.

There were a few hiccups that delayed our start, UK trains being UK trains, and the boat having a small issue on the way to the first dive location. We had to stop for a bit while the captain opened the ‘hood’ of the boat to look into the engine area. You’ve guessed it, I’m not a technical person. It was a seaweed problem I think. Anyhow, our captain was very efficient and after 20 or so minutes the issue was fixed and we carried on. 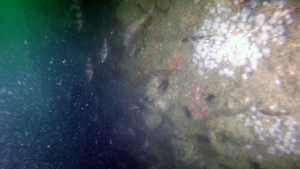 The vis was poor, but it’s definitely a wreck!

I was the very first to jump off the boat. I was so delighted about that (not). The idea of being abandoned in the sea is also one of the reasons I was not looking forward to boat diving.

Obviously, the lovely Matt was right behind me and Clidive is not a type of club to forget about its divers, but what can I say? Fears can sometimes be irrational. I am fine with spiders and snakes, so it evens out I think.

We swam to the buoy and without a minute to think we were heading down. I should have been better at communicating my emotions but I thought I could handle them. I am after all a strong independent woman. The visibility was poor and my mind was starting to freak out at the idea of heading into a dark abyss and so around 6m I thought that it was best to be brave and to let Matt know that I needed some more time to breathe. So I did.

Matt signalled ‘up’, but I did my best to show him I didn’t want to call the dive off – I just needed to calm myself and get used to the environment. I finally signalled ‘OK’ and we continued to descend, touching the bottom at around 18m.

Victory! The bottom wasn’t so scary after all and the wreck was right in front of us! My buoyancy was a bit all over the place but it was still great. We saw a lot of crabs but unfortunately I was ruining all of Matt’s fancy video shots by arriving like a big floating blob with sand and scaring away all of the animals. Sorry again Matt!

I consumed a lot of air very quickly and our dive was cut short and we had to go back up. I felt terrible for kind-of ruining Matt’s dive, but remember the thing I said about amazing people – well, everyone was so kind about it. We all had a nice hot drink and some snacks while the boat took us to the second location for the drift dive.

Now that my fears were conquered I was much more relaxed. As I jumped off the boat for the second time, it felt like I had been doing this all my life. My buoyancy was much better and Matt and I let the current take us on a lovely waltz. Shame there wasn’t music! We saw a beautiful blue lobster and loads of crabs and shells. It was perfect! Drift diving is definitely my top favourite now.

We then headed back home, happy and fulfilled by a long day of diving and full of new memories. Thank you to my lovely group for a wonderful day.

Looking forward to seeing you all soon on my next trip!