On Friday 24th September, seven adventurous divers set off to their luxury accommodation in the hills behind Swanage Bay for the weekend. Despite the risk of being stranded in the deep South in a fuel crisis, the divers begin to arrive over the course of the afternoon and inspect the tents they would call home for the next two nights.

Each contained four air beds and a lamp. After some swift rearrangement of the furniture, they proved to be surprisingly spacious and everything we needed to survive the weekend, although a good sleeping bag was a must to survive the crisp September mornings.

The first morning was an early start for some, as they rushed to the fuel station at opening for a chance to skip the queues and secure the trip home. Once returned, the group made its way to Swanage pier to unpack the kit from the van and begin the weekend of diving.

As this was the first time some of us had been diving for many months, the first dive was below the pier at a safe 5m. We had heard rumours of what we could find under the pier, but nothing could prepare us for the vibrant wildlife that awaited us there. From crustaceans to corals and even a few prawns, the pier provided not only a safe place to test skills and kit, but also an interesting and beautiful first dive. This, as we found out. was only the beginning of what Swanage had to offer. 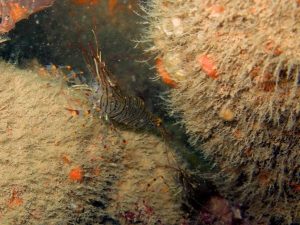 Following a brief lunch in town, we collected our filled tanks and waited for the boat that would be taking us out for the two days. Just as we had our equipment reassembled, the bright orange wheelhouse of the Divers Down catamaran could be seen approaching, skippered by owner Pete.

The first fully open water dive of the day was to be on the Fleur de Lys, a 1964 fishing trawler that suffered an engine room explosion in April 2000 and sank in the bay, 2km from shore. 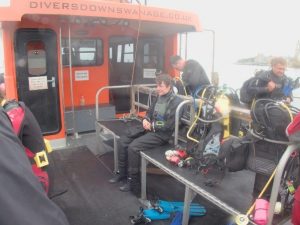 The wreck was only small, barely fitting the eight divers crowding round it. However, plenty of life had made its home in or around the wreck: various crabs sat around the sunken vessel, while small shoals of fish surrounded us. A short swim away, guided by rope, was an old munitions dump. Here even more creatures resided, providing us with a relaxed and interesting experience.

Following a brief stop to refill our tanks, we were back out on the seas again. This time, however, we left the cameras behind as we were off for a high-paced drift dive off Old Harry Rocks. As soon as we stepped off the boat, we could feel the surface current dragging us back towards the shores of Swanage. After a swift decent to 16m, we deployed the DSMBs and shot off in the current. 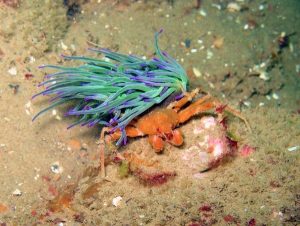 Being mostly sandy and relatively flat, with no need to navigate, we could focus entirely on spotting the wildlife sitting on the bottom or catching a ride with us in the ocean’s currents. With sightings of gurnards, stingrays, cuttlefish and even a small shark, this was far from being a boring dive. Unfortunately, limited by our maximum dive times (and the odd free-flowing regulator) we had to return to the surface.

That evening, in high spirits, we made our way back to the campsite where we joined the locals in the popular campsite bar for some dinner and a couple drinks, before retreating to our tents to sit by the firepit for a quieter evening. 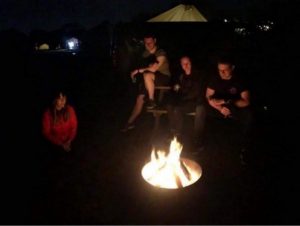 The second morning was a bit more relaxed, with the threat of being stranded out of the way. Having vacated the tents, we made our way into town for the best breakfast and hottest coffee Swanage had to offer. Following some minor burn injuries from our beverages, we headed back to the pier to prepare for the diving ahead.

The first dive was another drift, this time a stone’s throw from the harbour at Peveril Ledges. However, while the previous day’s drift required little focus on where you were going, this dive was a complete contrast. The current wasn’t as fierce, but there was still no stopping as it took us wherever it wanted, including over (or into) the 4m stone ledges that lined our route. 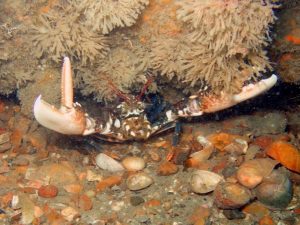 This was definitely the most challenging dive of the weekend, with the current not just pulling us horizontally but, if we weren’t careful, also up towards the surface. Difficulty aside, the dive proved stunning, with lots of coral and marine life making its home in the calmer waters of miniature caves in the rocks or in the still valleys between the steep ledges.

Our final dive of the weekend took place on the Valentine Tanks, a pair of failed prototypes for amphibious tanks during the second world war. To ensure the best visibility, the skipper dropped us as the tide was moving. While this ensured that any kicked up silt would be swiftly carried away, it also meant that any unfocussed divers would be too. Holding on tightly to the shot line, we descended the 15m to the first tank. 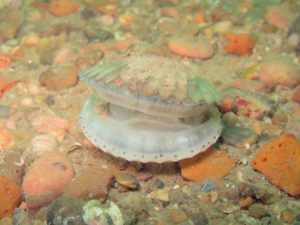 As soon as we hit the bottom and made the short swim to the first wreck, we were amazed by the life to be found in the 80 year-old vehicle. Surrounded by large schools of bib, the wreck housed all sorts of crustaceans and prawns. The highlight, however, was the vast number of large conger eels living in the wheel wells of the tank.

Between the wrecks, on a bed of broken shells, was an array of life, with piles of starfish, brittle stars and the occasional hermit crab peeking out at us. The swim between the two tanks was no easy feat. Having to swim perpendicular to the direction of the rope leading us towards the second tank to battle the current, we quickly tired; but before too long, the second tank loomed into view. Unfortunately it wasn’t as well preserved as the first, with bits of its turrets and tracks 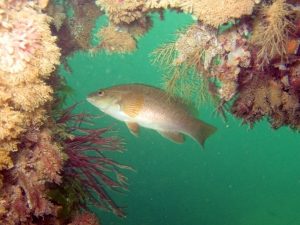 scattered around the seabed. However, this did not deter the sea life with more fish, crustaceans and eels staring us down as we circled their home.

We made our way back to shore for the final time, marking the end of our weekend. Many of us hadn’t known what to expect from a short weekend away in a small Dorset town, but we were all pleasantly surprised with what Swanage had to offer, both on the surface and under the waves.

A special thank you to Rebecca Oliver for arranging this amazing trip and to Nick Allibone for supplying some of the fantastic photos shown here.