For several years now, Clidive has organised an early-season training trip to warmer climes. It is a good way for new divers to sort out their skills and develop their confidence in a more relaxed environment than is generally on offer in UK waters in March. Two years ago, we were just getting ready to head off to Cyprus for such a trip when lockdown forced us to mothball our kit for a few months.

It was with some anticipation, then, that Nick and I flew to Hurghada on 4 March as the advance party for a group heading to a new training destination for Clidive – Pharaoh Dive Club at Roots Red Sea, just outside the port of El Quseir.

British run – we’re pleased to report that owner Steve Rattle is a staunch West Ham supporter! – Roots is the home of BSAC Red Sea (Branch 2485) and is a BSAC training centre. Its small-but-perfectly-formed house reef offers ideal conditions for training and fun diving, with easy entry onto a large sand and grit plateau, flanked by two reef walls that descend gradually to 20m before they turn north and south into deeper waters.

There are a number of other shore-diving sites within easy reach for a two-dive excursion and day trips can be arranged to the iconic Elphinstone Reef and the Salem Express. Offshore Zodiac trips are also available, although not while we were there (engine trouble!).

Early March is still ‘low season’ and conditions can change rapidly. We were relatively lucky with our week, which turned out to be a brief respite from some record-breaking windy weather; even so, we had to cancel a trip to the Salem Express and couldn’t even dive the house reef on a couple of afternoons. The wind also caused some currents across the house reef, which were particularly strong at the entry point; but well-anchored underwater lines enabled us to haul ourselves safely through the shallows. 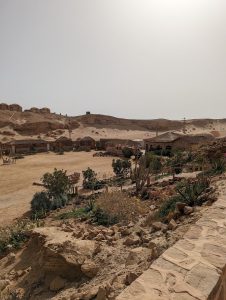 The Roots ‘camp’ proved to be an excellent base, with two-person, en-suite ‘chalets’, comfortable communal outdoor and indoor dining areas and a bar that stayed open until we decided to let the ever-accommodating Magdy retire for the night. The staff couldn’t have been friendlier or more helpful and quickly felt like old friends, for whom nothing was too much trouble. Steve was super flexible with our group’s arrangements, happy to accommodate a range of arrival and departure dates.

During the first three days, which were officially given over to training for those who needed it, we managed to sign off two new Ocean Divers, complete open water skills for a Sports Diver Trainee and sign off some Dive Leader open water skills as well. Three of our group also gained invaluable experience as Assistant Open Water Instructors and on-demand rescue ‘casualties’! 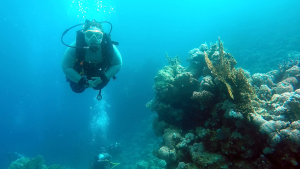 So did we enjoy it? Since I can only speak from the perspective of Dive Manager and instructor – both of which roles were made unusually easy by the set-up and the endlessly helpful staff – I asked the rest of the group to tell me what they thought; here’s what they said:

“I’ve been diving my entire adult life and never before have I had a surface interval of two years… I was keen to get back in the water (and a little apprehensive). Roots was a fabulous gentle re-introduction with relaxed pace for the dives, a guide who gave us an orientation and a really beautiful house reef.  We joined the group for the last four days before heading for a liveaboard. 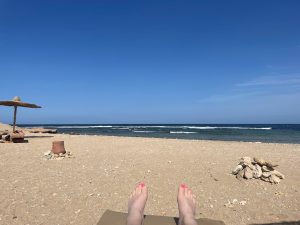 Joli relaxes on the beach – it’s not often we see pink toenails on a Clidive trip!

We only did one day’s diving, opting for a day in Luxor (AH-MAY-ZING)  and then a relax on the beach, as the wind later in the week made shore diving in a twinset more challenging.  We foolishly thought that the liveaboard would be much easier, but hit gale force winds when we got on the boat.  We managed to have a great trip despite the challenges thrown our way and it was great to be back with Clidivers on tour again!” Joli Riley (First Class Diver) 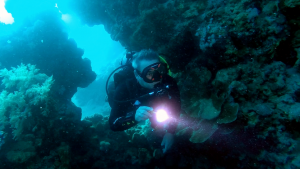 “This was a training trip, learning new skills and expanding knowledge.  On the first evening, over a convivial beer or two, my mind was enlarged by the well-known concept – to everyone but me – of ‘going for a bimble’.

The house reef turned out to be an excellent place to go for a bimble or two, and it goes like this: mosey on over to the dive shack on the beach after a leisurely breakfast, grab a tank, kit up, buddy check, a very short walk over the sand and wade into the gentle surf. 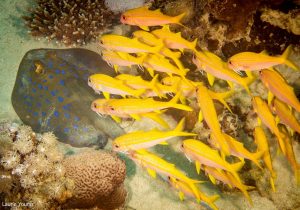 Just one of many blue-spotted rays (Laurie Young)

Ok, down, follow – or pull on – the rope, past the shoal of pipe fish and small lion fish hanging out on the right, look out for the patrolling squid just beyond, then choose a leisurely path to the south or north reef walls.  A slow meander along the reef wall – trying not to disturb the family of blue-spotted sting rays, the scorpion and puffer fish – to check out the pinnacle, home of a truly magnificent moray eel and an octopus that just seemed to sit atop a rock with a beady eye telling divers to bu#### off. 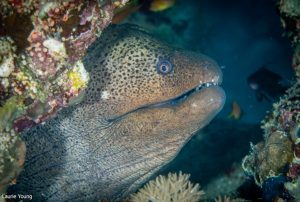 A few bimbles and you start to know where certain marine denizens will be, and maybe their behaviour too. (Remember that video of an octopus punching a fish that was so popular last year?  It was shot here.)  Slow, relaxed, take in a swim-through or two, just meander and explore.  Even in a current, a bimble is relaxed.  A pull on the ropes back through the channel, a chat on the walk back to the dive shack, de-kit and over to the beach cafe for a coffee and perhaps some lunch.  Bimbleing, what a marvellous skill to learn!” Perry Thomas (Dive Leader trainee & Asst Instructor) 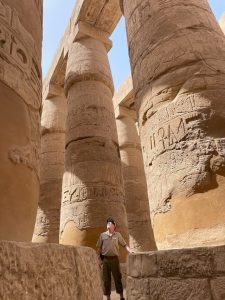 The splendours of Luxor – an excursion offered by Roots (Joli Riley)

“Attending the Egypt training trip was fun as it gave the best of both worlds. I spent the first few days fun diving the house reef and finding out where the octopus and the eel catfish lived. I then got to spend the rest of the trip leading newly qualified divers around and showing them the marine life. I also managed to tear myself away from diving for a day to visit Luxor – my first time actually seeing some ancient Egyptian remains.” Matt Brown (Dive Leader)

“I cannot pick one thing as the highlight of my trip. Of course, passing my Ocean Diver made my day – thank you Nick H! – but the whole trip was such a new experience. I got to meet a group of passionate divers and listen to you all talk about diving among other weird and wonderful things. Laurie turned the crackling sound of flies being cremated on the fly-killer into music – I hope PETA doesn’t get on his case on whether he or the fly owns the copyright. Perry and Mark supplied me with drugs [Sudafed and paracetemol! Ed]. 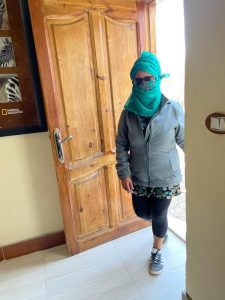 The Star Wars setting of the resort was surreal. The staff were fabulous; the meals gave me a good excuse to add hot sauce to everything bar my breakfast without too many raised eyebrows. [Actually, it was perfect on scrambled eggs too! Ed]. The realisation that sand could be so determined to leave Egypt and make the UK its home. I just want to thank the whole group for their patience and humour and for making it such a memorable trip.” Marie LeBrasse (Ocean Diver trainee)

“Egypt was a chance to get to grips with my underwater photography project in nice clear warm waters! Strobe lighting is hard enough on land, but trying to get it right while underwater is going to take a load more practice. Egypt provided the perfect conditions to get some practice time in!” Laurie Young (Dive Leader trainee & Assistant Instructor) 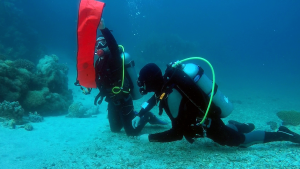 Jeremie putting up his SMB in a current (Matt Brown)

“My week of diving started with my Sports Diver open water training. Mark took me through pool skills I hadn’t had the chance to cover yet before moving on to the open water ones. Some were pretty eye-opening: towing a casualty in the pool can already be a real effort, but add some swell and this becomes an exhausting ordeal. Dragging an SMB around in IRB is fairly easy, but having it fight you due to winds and currents changes the way you go through the dive. 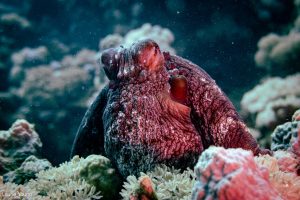 Once we were done with the skills part of each dive, we usually took some time to explore the beautiful house reef, home to vibrant life. The stars of the show for us were the blue-spotted rays and their cleaner-helpers, one fairly elusive octopus (which I maintain, doesn’t exist…) and one massive moray eel, nested in the south wall pinnacle. 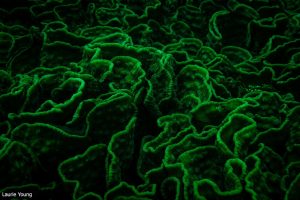 For the remainder of the trip, we decided we would explore different dive sites around the coast. One in particular stood out for our group: Serib Kebir. Its southern dive plan brought us through coral structures and narrow corridors. It is a beautiful and serene place, and it was a really interesting site to train my buoyancy and profile, gliding through these passages where we could only advance one by one in a queue. It is nicknamed “The Canyons” for a reason! 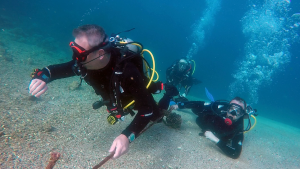 Exiting the house reef for the last time (Matt Brown)

Before we knew it, Friday came round, our last day of diving for the group flying back to London on Saturday. That day was quite breezy, but divers extraordinaires Perry, Matt and Laurie and I decided to defy the currents and the chilling winds, and to embark on one last very relaxing dive and photoshoot session.

Entry and exit were a bit difficult, but once we got past these points, the whole reef was really serene. In my opinion, a great goodbye to the place and to our week of travels. In the end, my computer logged 17 dives during the week, which is more than three times the number I had done previously.

This was an amazing trip, made even better by the world class company. Definitely a lively and lovely bunch who I am looking forward to diving with again and sharing a pint after a day of effort. Now, onto signing up for some of the club’s trips, and I think a great season is ahead of us! A massive thank you to Elaine for organising, Mark for all his teaching, and everyone else for the chats, bants, lessons and memories, all of which I will cherish.” Jérémie Aubert (Sports Diver trainee) 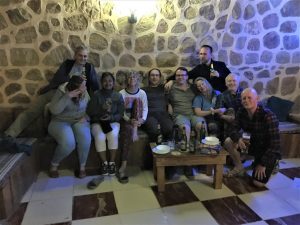