It was the Sea Shanty festival in Falmouth the weekend we were there and at times, with pirates wandering around and old songs being sung on stages and from various pubs, it seemed like we had gone through the looking glass and arrived in a Cornish Wonderland. But it was a different  perspective on the underwater world I was looking for.

A lot of the diving around Falmouth is classic Cornish underwater vistas of towering jewel-encrusted walls in clear water with colourful wrasse patrolling, urchins crawling, crabs hiding in crevices, and the odd wreck lying around for variety. Descending into this beautiful scenery it can the temptation is always to look at the big picture. If you like to play with a camera on your dives then you set it to wide-angle and snap away capturing shots of divers along the wall or wreck. So for something different I put the macro lens on for the weekend to see what it was like in close-up.

It can be a stunning sight to hover off a wall covered in thousands of jewel anemones and take in the kaleidoscopic variety of colours of the colonies laid out like countries on a globe. But get in close and you see something alien and quite different. You start seeing the individual animals in their strange exotic forms interacting with the things around them in their world at their scale. Some of you will have the eye-sight to do this yourselves; I’ve seen you staring intently at one patch of hallucinogenic wonder. Personally, I need to peer through the looking glass of my camera to see this particular Wonderland. 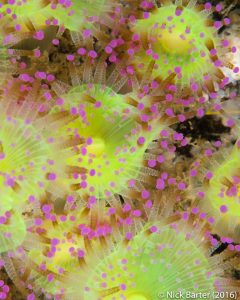 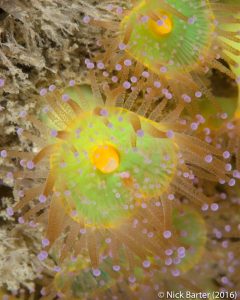 Fish in close up are a different challenge because they move. But they too have their surprises when you can get a closer view of their fabulous eyes or in the case of the ever-present cuckoo wrasse their amazing electric blue patterns. With Goldsinny on closer inspection it is the teeth that stand out giving them a slightly less friendly demeanour than I attributed to the general inquisitiveness of the very many we saw over the weekend. 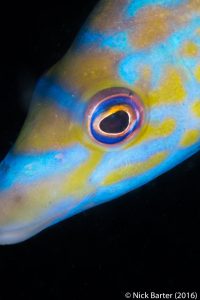 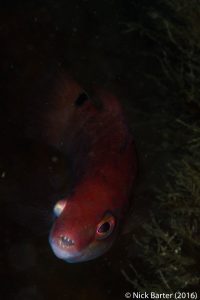 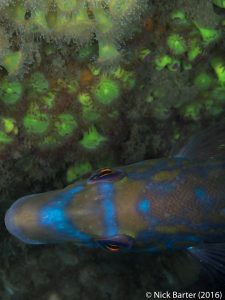 If you are looking for monsters of the deep, peer a bit closer to a spider crab next time you see one. Only by looking closer through a lens did I notice these appendages, whatever they are. 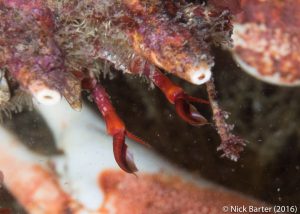 It all looks very different in close up. Next time I’m back in Falmouth for some diving I’ll be taking in the diver-scale view of the underwater world. But don’t ask me to navigate any of the dives as I was only looking at a few square centimetres of wall, wreck, or sea floor at any one time. In the meantime I’m looking forward to the August Bank Holiday in Plymouth when the best of Devon’s walls and reefs will be competing with all the lovely wrecks for my attention.