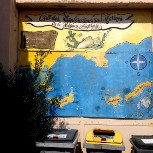 Our party of nine fumbled its way, by plane, by train and by automobile, along the humid underbelly of Europe, until we were met with a peninsula, which had the town of Hyeres at its root and our lodgings, “la Maison Tour Fondue” at its tip. 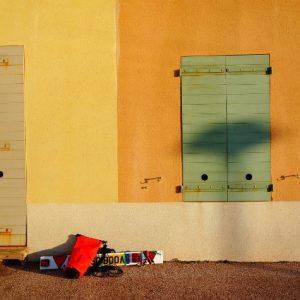 It was a beautiful place, right at the water’s edge. Opening wooden shutters to greet each new morning, my eyes would wander along the shoreline of the beautiful bay and around to the headland, on which stood the great Tour itself. The gaze of the more persistent viewer might skip across the waters to the silhouette of the Isle des Porquerolles, thus risking being dazzled by the near-omnipresent sun. 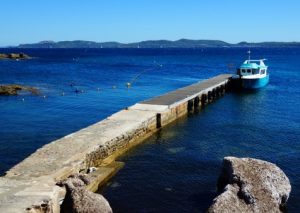 So too on the waters that we sped across, with the sun’s rays rendering reflective silver the sea’s surface, with bolts of light parallaxing off  a thousand wave tips travelling a thousand different ways, yet always returning the eye to the horizon. During our morning commutes on Yellow, I found it very easy for the eye to carry the mind off into a pleasant trance, and as we sped towards a new adventure, I realised that this really was a good place to dive and be.

And as above, so below, by which I mean to say that the our journeys down were without exception exquisite. At La Garbiniere, flora of every hue rolled out across and around soaring minarets and impossible steeples, as if we had dropped through the skylight of a psychedelic carpet factory. Schools of barracuda fooled the eye into flat perception, whilst groups of grouper went about their business. There are numerous sites around this small island, and it comes highly recommended by all divers on the trip. 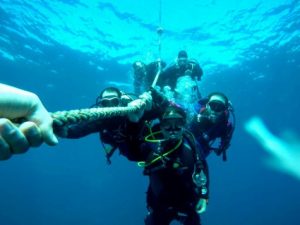 Occasional strong currents added  spice to one morning’s dive, and unfortunately curtailed our exchange with the wreck of “The Donator” the next, whilst temperatures at depth were a little chillier than some felt the Med might have promised them. Nonetheless, there was a huge variety of life and landscape to see and we were all extremely impressed, even with the shallower dives.

Yet there were obstacles. Even before the first dive, with ten kilometres of an 850-mile journey left to complete, Clidive’s van was forced into a layby, so that a smouldering trailer wheel could be attended to. Trial by water came in the form of a virulent headcold, which brought down half of the camp. 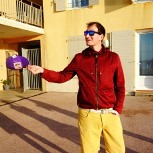 Notably, we ran up time and again against mild hostility from the mixed English and French residents.  The local shopkeeper became cross when we bought too much bread one morning, whilst this gentle author was criticised by the hostess one lunchtime for having a noisy walk.

An elderly local, possibly traversing the twilit oceans of his own consciousness, sat on a harbour bench and watched us de-kit one evening, with a look of slack-jawed horror playing across his face, suggestive of a Gallicised version of “The Scream”.

At one point, the very seat supporting your gentle author revolted, leaving him sprawling on his back, much to the delight of his fellow diners; that I had consumed at least half a hundredweight of mixed fish platter should be put down to chance coincidence, at most.

Future trips to the area might profitably consider the rental of a private villa. 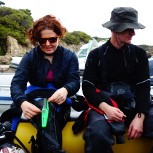 The daily cadence of the trip worked in counterpoint to the arc of personal development, such that by the last day of diving, a rough unity of action had been achieved. Sad then, that such a team should be broken apart just at this point – another week would have been welcome here. 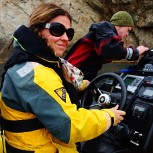 Special thanks from all concerned go to Gillian Bell, for handling the boat and for really just caring for us all; and, of course, Richard Kelly, who exercised his leadership lightly and deftly. 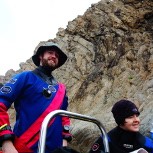 This was an amazing trip, even by Clidive’s standards, and will linger, both in the memory and in the Britannia’s soundwaves of a Thursday night, for some time I’m sure. 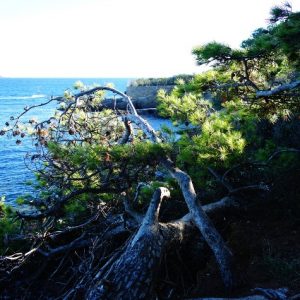