If you are new to RIB diving – that’s diving off a rigid inflatable boat, of which CLIDIVE owns two, pragmatically named ‘Yellow’ and ‘Blue’ – you could do worse than starting in Portland.

The pontoon from which trusty Blue took us out to sea is just 50 steps from Dive Beyond dive centre, where we had our cylinders filled by the friendly and efficient staff. Dive Beyond, in turn, is just ten steps from Hotel Aqua, our base for this weekend. There is a wide outdoor area at the back of the hotel, right next to Dive Beyond, with wooden benches and tables, space to set up and leave your dive kit, and even a tap and shower for rinsing off the sea water.

Portland harbour is the second largest man- made harbour in the world (after Jebel Ali in Dubai), and there is a range of dive sites within its expanse. Several ships sank within the harbour walls, and have now become artificial reefs. This means that you can dive Portland in

almost any weather and still have something interesting to see under water.

Our early October training trip featured several Ocean Diver trainees planning to make their first dives in the open sea, two members hoping to complete some Dive Leader and Advanced Diver training, their committed instructors, and a handful of divers coming along for the fun.

On Day One, the OD trainees began with some shore dives, but they joined the others on the RIB on Day Two, descending to the wrecks known as The Dredger and The Spaniard. Other sites we visited included the Countess of Erne, a well-preserved wreck covered with two different kinds of sea squirt that looked as if they were made of delicately blown glass.

Interviews revealed that our divers took home rich memories of their underwater adventures, which included:

“The awe-inspiring experience of seeing my first wreck, and diving in its shadow.”

“Seeing a necklace on the seafloor, and being startled when it moved and revealed itself to be a crab.”

“Divers looking as if trapped in a school of whiting.”

“Seeing my first living coral, even if it was the ghostly kind known as Dead Man’s Fingers.”

“The beautifully coloured tentacles of snakelocks anemones swaying in the current.”

“Participating in a rescue management exercise – playing my part in rescuing an unconscious diver from the sea, hauling him into the boat, giving him oxygen, calling the coastguard …”

Congratulations to Kath, Ruihua, and David, who made significant steps towards qualifying as Ocean Divers, and to Tomek, who passed his Rescue Management Lesson with flying colours. 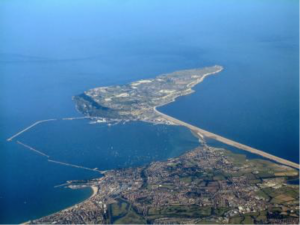 A view of Portland Harbour

Thanks to Chris for organising the trip, and to Elaine for taking over the management at a few hours’ notice, when it turned out that Chris unfortunately couldn’t come along. Thanks also to instructors Preeda, Steve, Elaine and Phil. And last but not least, thanks to Nick, our skipper for the weekend.