Flippering in the Farnes, 9–12 September

Why would you go to Seahouses, a fishing village in Northumberland? For the sunrise over the ocean? For the sandy beach with its windswept dunes, several miles long and largely unspoilt by the plastic litter so abundant on the busier southern beaches? For Bamburgh and Lindisfarne castles, which you can see for miles across the water? For the cormorants, the shags, the fulmars, the kittiwakes, the guillemots or the puffins? These may all be good reasons to go to Seahouses. But if you are a diver, you go for one thing only: you take a boat to the Farne islands, a few miles off the coast, and visit the seals.

As the boat took us past the Inner Farnes on our way to our dive sites on the Outer Farnes, seals stuck their heads out of the water in a position known aptly as bottling. Watching us, wanting to find the source of the motor noise they’d no doubt heard under water.

The underwater landscape is rich in life. In the top few meters, thick bushes of kelp sway in the swell. On their leaves, bryozoans grow in white patches. Below, you descend along steep walls of rock, which are covered in white and yellow dead man’s fingers. Urchins sit in between, minding their business. Sea stars creep along, patient and methodical. Crabs perch on ledges and raise their pincers to warn you off when you get too close.

Every crack is someone’s home, and indeed often has several inhabitants. We saw lobsters, several kinds of crab, and the face of a tompot blenny. Sun stars, which have a dozen arms or more and sport splendid colourful patterns, hang on the rock like expensive ornaments. In the open sea, magnificent lion’s mane jellyfish pulsate, their thin white tentacles trailing behind them like mad spider webs.

So what about the seals, then? About 6,000 grey seals live on the Farne islands, and the population is currently healthy. In the 2015 breeding season, 1,876 pups were born. Grey seals begin their lives between October and December. So in our September visit, apart from the massive males, who may weigh well over 200kg, and the slenderer females (around 150kg), we also met several youngsters awaiting their first birthday. They tend to be the most interested in us bubble- makers with our long flippers and awkward style of swimming. 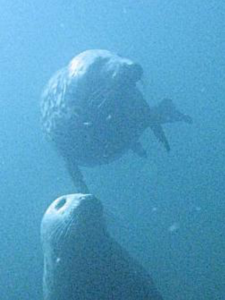 A pair of Farnes seals, not interested in divers. Photo by Pippa

Curious and cautious in equal measure, they tend to approach you from behind to steal a nibble of your fins. This might happen anywhere: as you swim past a wall, as you hang about during your safety stop, or even at the surface, while you are bobbing about next to your DSMB sausage, waiting for the boat to come and pick you up. Another way of meeting seals is to swim into the gullies that they use as pathways from their resting places on the rocks to the sea: their equivalent of the path from the garden gate to the front door of the house.

A favourite dive site is the Hopper, situated just off Longstone, the largest of the Outer Farnes. It’s a sandy patch at about 20m. As we approached, a large school of finger-long juvenile silvery fish swirled about. A pair of seals were resting on the sand, eyes closed. They appeared mildly annoyed at our approach, looking at the uninvited visitors with bored disapproval.

When we got closer than about three metres, they rose lazily from the sand and made sure to keep us at a distance. We hung about in neutral buoyancy, a few feet off the sand, and watched as the seals kept dancing around us, sending the frightened ball of fish into frenzied patterns. We spent several minutes like this, before the lure of the next gully sent us on our way. 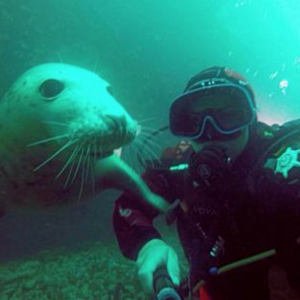 A Farnes seal photobombing a selfie. Photo by Anastasiya Grachova

We had four great dives under sunny skies, in calm seas with good visibility (up to 8m). Unfortunately, on the third day a south- easterly meant that diving was impossible, so many of us started their journey home early.

Our dive boat was the Serenity II. We arranged the trip with Sovereign Divers, from whom we also hired cylinders and got our fills. Ropes off was around 9:30 am, and we went out with two cylinders and were back in the early afternoon. We stayed in self- catering accommodation. Thanks to Anastasiya and Pippa for cooking three delicious dinners, and to Tom for organising a fantastic trip. Congratulations to Mark, who is now a Sports Diver, having completed his last qualifying open water dive on this trip.