[From the editor: A big apology to Mackenzie for the late posting of her report, which somehow didn’t reach me. Mackenzie and husband Luca trained with us at the end of 2018, and the enthusiasm they showed in training shines through this blog. In case you’re wondering about the ‘accent’, Mackenzie is originally from Seattle. I confess to having changed the US spellings…]

This was my first dive trip with Clidive and it was so wonderful I absolutely can’t wait to kit up again, next time in UK waters as an Ocean Diver (yay!).

Next, a huge thank you to Phil for organising an awesome experience, and additionally to Sharkey, Dave and Debbie for their training prowess (you guys are all amazing seriously). Thirdly, shoutout to Niovi for the photos!

After enjoying a great breakfast buffet (this hotel was seriously perfect!), we headed down to the dive centre: a convenient 5-minute walk along the beach.

Aquarius Dive is very well run by Klaus and Jack and is right next to a bar (how serendipitous). Since the Adriatic Sea was only 15-16 degrees, us Ocean Diver Trainees – Luca, Christian, Clarissa, Martin, and I – got our thick wetsuits on and had our first training dive in the 6m sheltered water polo court.

The Sports Diver Trainees – Niovi, Jean-Baptiste (JB), and Emma – generously climbed the hill up to the market (via the “stairs of death”) to get us all tasty pastries for lunch. Next they did their own first dive, which involved super important rescues and inevitably getting very comfortable with each others’ noses.

In the afternoon, the ODTs had a shore dive during which we trained on lifts and saw rainbow wrasse, lizard fish, sea stars, sea cucumbers, and the effects of fresh water mixing with salt water (called a halocline – can be disorienting). We ended the day with a refreshing local beer at the bar next door and were rewarded with this sunset: 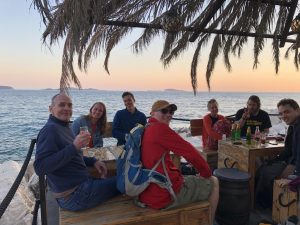 We woke up to brilliant sunshine and a bit warmer temperature, which made me immensely happy until I checked the weather in London and found that there it was actually one degree warmer (how?!). I quickly got over this though because the training dives today were particularly awesome, including my first from the boat! 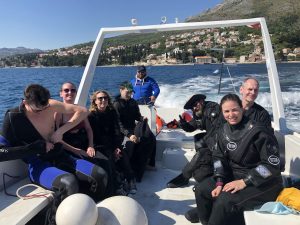 The ODTs started with a shore dive finishing off our skills in 6m depth, while the SDTs went out for a boat dive to work on their navigating and dive leading skills. In the afternoon Sharkey, Luca, Chris, and I went with the SDTs for a small boat dive. The SDTs continued their navigation work, while we worked on our buoyancy and buddy diving skills. Highlights included an impressive sea wall with a couple large colorful crawfish hiding in it, lots of groupers, and sea stars.

On our final training day we all headed out in the boat together as a big group. Luca, Chris, and I reached our maximum depth as ODs during a great dive after completing our AS lifts. We also saw a couple moray eels which were beautiful, and Niovi led her dive to complete her SD training!

Unfortunately the wind picked up in the one direction that made it impossible to take the boat out for a second dive. After a long lunch near the beach waiting to see if the wind would shift, the sun started to set so the ODTs did one last dive in the water polo area. By then it was chilly and we were tired but Sharkey selflessly got us through the remaining skills (like a boss!).

That evening we feasted like kings and queens at Peppers Eatery in Dubrovnik, a great restaurant with tons of options and amazing cocktails (hellooo frozen mojito jug). We laughed a lot and toasted to an incredible training trip! Cheers! 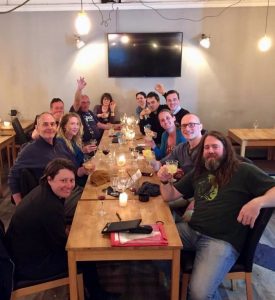