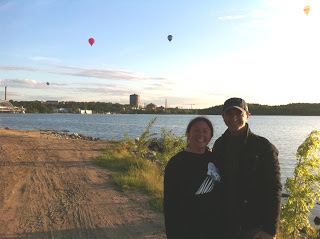 Not content with merely ice diving in Sweden, on Joli’s recent visit back to Stockholm for work, she met up with other fellow Clidiver, Ozgur, after work for a wreck dive to take full advantage of the long scandinavian summer days.

They dived the M/S Benli which is intact as it was only sunk 6 months ago, is in cold water, low-salt and non-tidal/very sheltered.

However, finding it was tricky!  The brief was to enter by the rocks, find the tyre and follow the line to the wreck.  However, it was 0 visibility so finding your own hand, let alone a tyre was impossible.  Joli resurfaced after 8 mins of scrabbling in the dark and noticed the Dive Master’s (who got in first (wise man) before all was kicked up ) bubbles were coming up from the area described as to where the wreck was relocated.  The pair quickly descended down the bubbles and at 6m, the wreck appeared like a ghostly vision.

Thanks to http://www.alpindyksport.se/ for organising and kit hire!