Home › Dive Trips › Was it a minesweeper?

Was it a minesweeper? 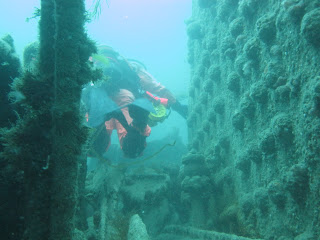 Given the option of The Heron, in slack ,or an unknown mark on Andy’s GPS, the group agreed (guided by the consensual DM) to go for the unknown mark. Easing himself gingerly down the shot into a gentle current, Bob wondered “Should my mask be pressing onto my face like this?” He looked up and saw human bunting on the shot. As Warwick said later, it was a bit frisky. However, the more hands/no fins divers hauled themselves around the wreck. It was mostly splatted, but we told Andy it was a minesweeper because we knew he wanted to hear it. Nick saw shells and the anchor, Mary found a lobbie and Rory saw the conically thingy that confirmed our find. All survived.