Within minutes of landing at Larnaca we found ourselves discussing the days ahead with Mus whilst eating delicious and very large Cypriot kebabs filled with sheftalia, pastourma, haloumi, chicken and pork and washed down with our beer of choice for the trip: KEO. Mus’ enthusiasm for diving the Zenobia was only beaten by his enthusiasm for the food he had planned for us to eat, in particular the burgers at San Pedro’s burger shack next to the dive centre, though for himself he assured us ‘the diet starts tomorrow’ since after two weeks on Cyprus his drysuit was too tight and trousers too small.

At 7:30 next morning we were all at the dive centre signing forms and putting our kit together. Heads and bodies were a little jaded given our food and dive discussions had continued through a few more KEOs. But before long we were sat in the big yellow 10m RHIB, Eleni R, with its two 300HP engines making very short work of the the mile or so ride out to the Zen.

Dive-In is a great operation. Our twinsets, stages, and Mus’ rebreather were taken from us once gasses were analysed and regs assembled at the dive centre. They were put onto our backs moments before we dropped in to the refreshing 18 degree deep-blue water of the Mediterranean. Our only task was to walk the two minutes from the dive centre to the harbour.

Dive 1 took us down the bow shot line where most of our dives ended in deco. around the trapeze maintained by Dive-In. This dive took us on a tour of the outside of the Zen down to the seabed at 40m then winding back up and along the superstructure peering through windows and doors at what lay beyond. Visibility was at least 25m and it was easy to get a perspective of the wreck’s layout.

The Zenobia was a 178m RORO ferry with three cargo decks and an accommodation level. She capsized in 1980 on her maiden voyage due to problems with the computerised ballast system. No lives were lost as the ship had been evacuated. She lies on her side so floors and ceilings are now walls and walls are now floors and ceilings. The 106 trucks and one car on the Zen are either piled up on the port side of each cargo deck or hanging precariously from chains on a wall that was once the deck. Trucks on the outside decks tumbled to the seabed. Very little has been salvaged from the wreck so these treasurers occupied our remaining five dives.

Dive 2 was to be our first inside the wreck. But first we descended the stern shot line onto the two huge prop’s and made our way around the stern to the trucks lying on the seabed. These include the famous egg lorry whose ovoid cargo is piled up on the seabed with barely a crack… though somehow all of us swam right by without noticing all the eggs. Our eggselent guide, Alan Timmins, couldn’t believe it. The following day after another spotting failure we forced him to take lessons in the kind of underwater signage we expect in order to notice the blindingly obvious. After the trucks, we ascended the superstructure and entered the accommodation block at the top of the wreck. We followed a corridor through the ship back to the bow with cabin portholes and bathroom fittings above us. As we approached the bow this corridor opened into a deep space below us that had been the restaurant. A soft blue light could just be seen through the windows at the front of the superstructure lined up below us.

Day 1 diving was complete so eating could start. Since San Pedro’s is closed on Sundays we made do with a huge lunch of lamb kleftiko, red mullet, pork chops, bread, hummus and taramasalata washed down with KEO. A short siesta later we reconvened in town for beers, cocktails and a small dinner that was anything but small. Away from the most touristy areas we found cool bars and a friendly bustling atmosphere that kept us going longer than the 7:30am start next morning warranted. Luckily right next to Dive-In is a 24-hour coffee shop, The Coissanterie, which, amongst other assorted delights, serves delicious triple chocolate croissants as well as strong sweet coffees which were very much required.

Dive 3 took us into the darkness of Zenobia’s cargo decks. The upper deck is entered at the bow though a post box opening that was once a door to the forward deck. It took a minute or two to get accustomed to the dark cavernous space lit up only by our torches and the occasional flash of my camera’s strobes. We descended into the dark onto the colourful wreckage of trucks and cargo below. This wreckage continues unabated all through this deck. Eventually a large blue opening materialises in the distance where the upper deck once opened to the elements. What looks like a gantry lies across this large blue window. But it is actually the remains of a truck that was carrying cattle carcasses and the bones of those cattle are piled up deep on the floor of this truck. To Alan’s bemusement none of us saw them despite him swimming slowly over them and shining his torch on them. Following this dive we ‘helped’ him develop the signs none of us could misinterpret for the next must-see items.

Dive 4 took us right into the still darkness of the enclosed middle cargo deck. It is entered by the small Pilot’s door on the vast starboard side of the Zen that is now a sunny meadow populated by tasty looking Bream. After a bit of a squeeze through the entrance and a minute or two to get accustomed to the dark we descended to the wreckage and wound our way towards the stern between the trucks and their cargo. At the end of the deck is a forklift truck. Alan made the agreed signs and we all saw both that and the jumper that is lying against one wall. Surrounded by darkness the colours of the trucks, their tarpaulins and cargo are still vivid after all these years under water and are now mixed with the inevitable bright orange rust.

We had truly earned our San Pedro burger and as promised it was dive food extroadinaire. And large. The siestas that afternoon were a little longer and the need for evening food a little less. But that didn’t stop us heading to a fish restaurant where a fish mezze was more than a challenge for just us and so the local stray cat population happily joined our feast. Don and Joli proved a very soft touch when it came to fluffy animals with big feed-me eyes.

Dive 5 was an adventurous tour starting at the bottom of the restaurant and ascending past the serving station with its tray rails, coffee machines and food bays still in place, and the brightly coloured tartan carpet still mostly in place on the floor that is now a wall. At the top we rejoined the accommodation block corridor from the second dive. But a little way along this we tuned back down into the wreck and picked up a lift shaft which took us through to the upper cargo deck again. With an obvious and slightly rude sign agreed for ‘bone’ we headed back to the beautiful blue window at the stern end of this deck and duly took in all the cattle bones before returning the length of the upper cargo deck looking at features on the deck’s starboard walls that are now the roof. These include a cargo of blue plastic bottles that have floated from their containers and are trapped bobbing against the roof.

Our final dive was back into the darkness of the middle cargo deck. This time we turned towards the bow of the ship and passed through more colourful wreckage including a cargo of sleeping bags mostly still rolled up. Our target was the only car on the ship, the captain’s blue Lada, which luckily ended up on top of all the trucks instead of below them. None of us missed it as it emerged from the darkness. The atmosphere on this dive was more intense because of the amount of diesel floating like smoke in the water giving a distinctly other-worldy feel. The contrast as we emerged out of the little Pilot’s door into the blue Mediterranean was vivid.

Three days wasn’t enough. The Zenobia is huge and there is so much more to come back for. Mus had been there for a week and also saw the lower cargo deck, main engine room, auxiliary engine room and tool shop. Most of our dives inside the wreck maxed out around 35m and outside the wreck at 40m. Dives are an hour long with 5 to 10 minutes deco on 50% nitrox.

All that remained on this trip was more food. Lunch at our new favourite restaurant, Portokalis, which is run by a man from Mile End, included the largest pork chops I have ever seen, more chicken kebabs and a rich Moussaka. A long siesta prepared us for a night out with Cypriot friends of Don’s after a ‘light’ meal of the hugely delicious and deliciously huge kebabs, washed down by some with a bottle of Zivania and by others with KEO. The night was long and probably memorable. 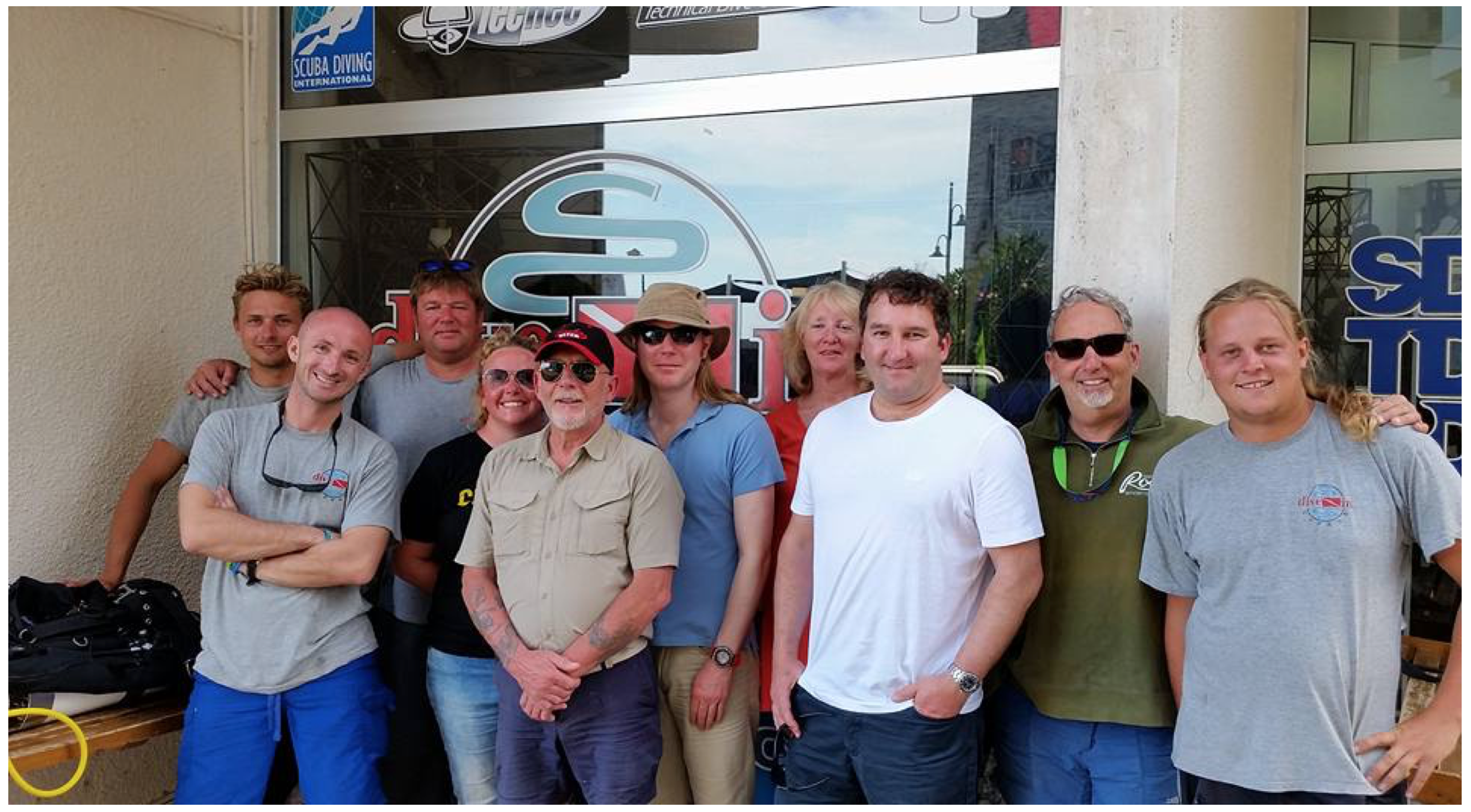 As I sit here on the plane home following another lunch at Portokalis of tasty grilled Bream with chips, bread and dips, and a hangover beating shandy I can confirm that the diet really does start tomorrow… 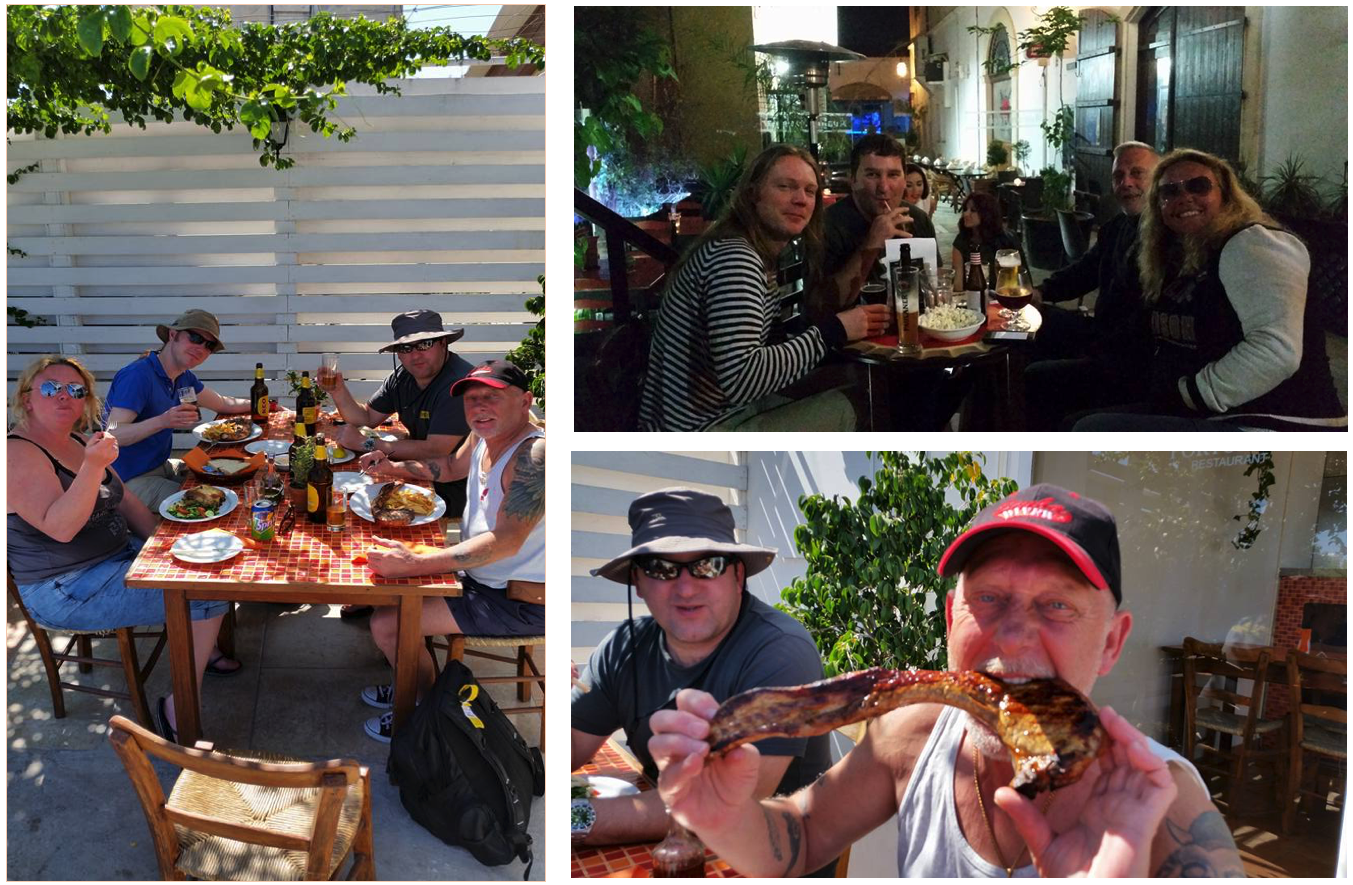