Posted on 2012-07-30 by WebMaster
On Thursday morning the weather was looking good so we set off from Gelliswick for the Smalls Lighthouse, 20ish miles off the coast of West Wales. Dolphins and puffins were spotted on the way and seals greeted us as we arrived at the lighthouse. Loads of them, much more than we saw at Lundy earlier this year.

We had about 10m of visibility on the dives there with seal encounters on both! Those on the second wave spotted a sunfish on the surface whilst the first wave was diving.

It was a long journey out there, but definitely worth it! 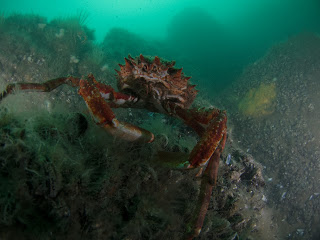 On Friday we headed towards Skomer for a morning dive on the wreck of Lucy, a coaster sitting in 40m of water with the decks around 35m. Its a big wreck with lots of life on it, including some huge nudibranchs. In the afternoon we dived Tusker rock which had some very colourful surfaces.

Saturday morning saw us again head towards Skomer for a dive at the Garland Stone followed by a snorkel with seals during our surface interval, and a search for a wreck near Stockholm bay for our second dive. 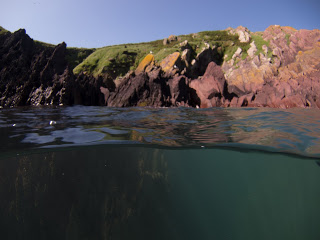 On our way back to Gelliswick on Saturday conditions had worsened, and the weather didn’t look good on Sunday so we were restricted to diving within the haven. We dived the Caroline in the morning, had a nice lunch stop at Dale and then finished off the weekend with a pleasant dive on the Behar in the afternoon.