Home › Dive Trips › Messing about with boats: a week in the life of the bosun and his mates

Messing about with boats: a week in the life of the bosun and his mates 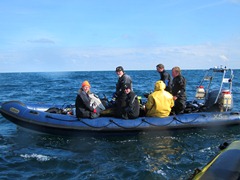 As you know, Clidive (i.e. you and me, the members!) owns two lovely RIBs (rigid-hulled inflatable boats): Yellow (7m long) and Blue (6.5m).

The boats and their trailers take a lot of punishment over the dive season, covering several thousand miles on the road and lots of running hours on the engines. This takes its toll and they need to be regularly maintained.

Last year, when the boats were moved back to their winter home at Gallions Point marina in east London, we carried out a thorough inspection and identified several items needing repair or replacement. So here’s what we did.

The ‘fishfinder’ depth sounder had suffered a catastrophic leak and didn’t work properly. The committee decided to replace it with a new updated model with some inbuilt redundancy for the other marine electronics on the boat.

After much deliberation, we bought a Humminbird Helix 7 with GPS, charts and down-imaging SONAR, and the work to fit it to the boat started in earnest with the change in weather at beginning of April.

The tube detaching from the transom

Before it could be fitted, however, we had to fix the sponson tubes (the bit you sit on) on both sides of the boat, which had parted company from the transom (the flat bit the engine bolts to at the back of the boat), while the rope mountings and some protection patches were also starting to detach.

How did the tubes and patches come to be like this? Apparently, under-inflation – they should be rock hard when used on water, otherwise they vibrate at high speed, which hardens the glue and causes it to fail.

The Equipment Sub-Committee got advice from the boat manufacturer, bought adhesive, solvents and materials to clean off the old adhesive, and made a plan. Mark O’Loughlin, Nick Harrison and I spent a wonderfully warm Saturday armed with scrapers, rags and solvent, and cleaned the patches. It was a long day – 6 hours of hard graft in the sun to clean the material and prime the area with new glue.

A few days later , Nick and I returned to Gallions at the end of the work day (yes, we do both work full time despite popular belief!) to complete the gluing and fit the new sounder.

Tricks of the trade

Hole in the console ready for the sounder

After lots of careful measuring, we cut a new hole in the helm console (the bit where the steering wheel is), and the new unit fitted beautifully.

Now came the difficult part: we had to install the sounder’s sensor and cable. Unusually, Blue was built with a duct under the floor for the cables and fuel lines. Any new cable needs to be pulled through this duct, which – being on a boat – was rather damp and full of other cables and hoses.

Luckily, I’m an electrician and have some trade tricks up my sleeve, which meant it only took about an hour to install the new cable. However, we did have to dismantle some parts such as the fire extinguisher holder, which then had to be reassembled and resealed, creating even more work than was anticipated. But the cable was in, the power connections made to the existing wiring, and the unit fired up.

We managed to clean up the boat and glue the patches before darkness fell, improvising some support for the repairs while the glue dried.

One of the repaired tubes – a lovely job!

On the following Saturday I returned to Gallions for a third time to seal the parts we had dismantled for the sounder, fit the sounder sender unit to the transom, fit a new storage box on the cylinder rack and remove the supports for the glue. Thanks to the careful preparation and the unseasonably warm, dry weather, the repairs had been a success.

While I was at it, I fixed the seat hinge pin and repaired the seat, and replaced a few items on the trailer, including the jockey wheel which had lost its tyre due to misuse.

The instructions for the new sounder are on the website in Trip Resources – do please read them if you are going to be driving the boat.

A new box for cameras (and chocolate!)

I’m pleased to say that Yellow wasn’t in a bad condition overall. The breakaway cable on the trailer needed replacing along with a wheel that had been damaged; a problem with the sounder was traced to a broken cable which I soldered and repaired while it was on the water in Portland at Easter.

We are now producing a new photo guide to launching and another for flushing and washing the boat down. However experienced you think are, please do check and follow these, as it will save the club a lot of time and money.

A flushing kit box has been made up for each boat and contains a brass two-way splitter valve, which means the engine and the wheels can be flushed for the full amount of time at the same time with just one water point while the boat is being cleaned up. This means the brakes should last longer, as should the bearings and hubs.

As you can see the boats take a lot of effort to keep in a good condition. But boy, is it worth it when you do a job well! 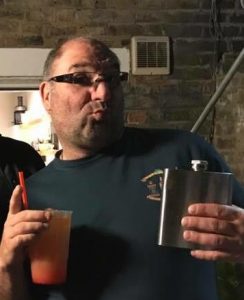 As always willing volunteers for boat working parties are always welcome when the boats are at home, or away. Just email to be put on the list: Steve@clidive.org