Preeda and Anne (adventure junkies!) arrived early on Friday and spent their first day exploring and trekking Portland via the Coastal Path route. As a lovely bonus the weather was fabulous! We trekked the whole island, the coastal path took us to all the most interesting parts of Portland – including the butterfly sanctuary, ancient ruins, mysterious forests, Jurassic coasts, quarries, and some cool rock carvings.

In the evening the rest of the group arrived.
There was so many fabulous highlights on this trip, it was truly memorable.

The next day, instead of the usual rib diving we were treated to a hard boat with lift, post dive beverages and Hot Pasties straight out of the oven! The boat was moored in Weymouth which was hosting the annual boat festival – which brought in boats and ships from all over the World, some were very impressive! We had to navigate our way from Portland and past various road closures that were placed for the local festivities. 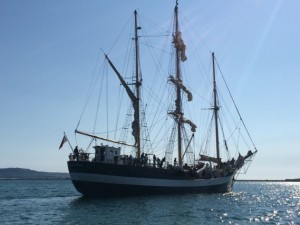 Day 1, Dive 1 – M2 Submarine
Our first dive was the M2 submarine sunk in1932 and was an interesting variant. Typically British, it was a submarine aircraft carrier. The sub housed a small two man sea plane, launched via a catapult. They would surface, launch the sea plane and submerge. The crew were trying to beat their time record for surface-launch-submerge and opened the door a second too early and flooded the sub. We dived it at ‘slack’, the deck is around 30m, the sea bed at 35m and the top of the coning tower is around 27m.
The fish life is prolific! I have never seen so much life and everything is super-sized. The edible crabs are huge, the fish massive and the congers, they are gargantuan! We saw about 2 congers and they were massive! The others on our boat saw more. All the fish around were of good size and much more plentiful than we’ve seen on other dives in the area. The visibility wasn’t great, but we made most of our time and investigated as much as we could.
Back on board the skipper had hot drinks and hot pies waiting for us which went down like a treat! 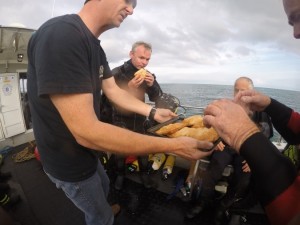 Day 1, Dive 2 – Drift dive on Balaclava Bay
This was an amazing drift dive. We were at 25 metres and drifting at a speed of 3+ knots per hour. We were literally flying above the sea floor feeling like Peter Pan’s lost “girls” which was great fun! The sea life seemed to stop and look at us in a stunned manner which was amusing to see. There was plenty to see, highlight was free swimming eels! 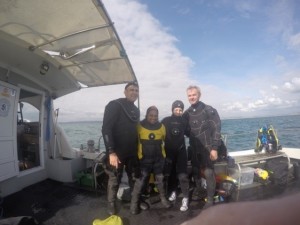 Day 2, Dive 1– Aeolian Sky
WOW! She was BIG! The Aeolian Sky was a Big Modern Freighter, with superstructure and engines at the rear and four massive holds separated by equally massive masts and cargo derricks. The Aeolian Sky was sunk in collision in 1979. It was an impressive dive and we spent our time exploring the hold bay which was left exposed. The sealife here was phenomenal! Large bibs and wrasse was everywhere. We were diving with fun Colchester BSAC guys. Clive caught a gargantuan lobster; it was amusing seeing Preeda holding open the goody netbag while Clive struggled to put this massive lobster in the bag. It was a miracle that neither of them was hurt by the lobsters’ pincers! 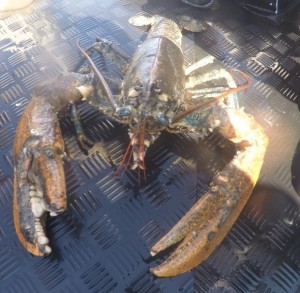 Day 2, Dive 2– Lulworth Banks
The fourth and final dive of the weekend was another drift dive, this time a much gentler speed so we were able to observe much more of our surroundings. This was scallop heaven. We brought up some scallops which the skipper cooked for us with herbs and seasoning, served with lemon couscous – he was the best skipper ever!

Portland dive weekend was very memorable, can’t wait for our next dive adventure! 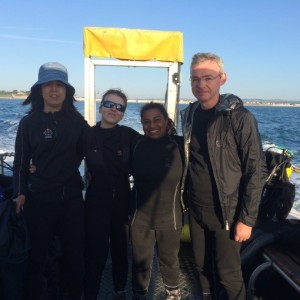