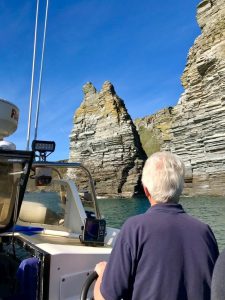 If the Isle of Man isn’t on your diving bucket list then add it – sea caverns, cat sharks, dramatic topography above and below the surface and ever-friendly seals – watch out for the playful bite marks on your fins.

The Isle of Man boasts a dramatic cliff-strewn coastline broken by long golden beaches. The waters are a clear, rich blue, nurturing teeming communities of plants and animals. Brightly coloured fish follow divers hoping for easy food. The sun sets over the Irish Sea! The palm trees outside Ronaldsway airport serve to reinforce an incongruous tropical image, which the temperate waters betray. To us, however, hardened (dry-suited!) divers, the cool seas were a minor consideration given the thrilling dives that awaited us.

Seven of us went up to Port Erin for the season’s last dives before skipper Mike Keegan, of Isle of Man Dive Charters, took his boat out of the water.  The last dives! Even the very experienced divers were impressed by the boat: a large cabin to keep warm in, plenty of room for kitting up, a dive lift at the rear, facilities to make hot chocolate and bacon butties, and a friendly and highly experienced family crew.  This large RIB used to be a ferry between some Scottish islands before being bought and custom converted by Mike.  The boat can only be described as a “RIB disguised as a hard boat with the power of a rocket missile”.

Mike also provides the accommodation: a big house with large dining and living room, kitchen etc.. No bunk beds here and it’s the antithesis of a  live-aboard – having been a diver himself he knows the diver’s need for the luxury of hot shower and plenty of space to spread out. The well-equipped kitchen was important for fried breakfasts and, with many thanks from the rest of the team, to Kath who cooked up an amazing fish pie on Saturday. 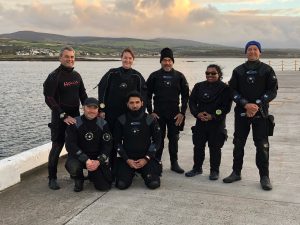 So the team: Preeda organised, managed and led the dive team in her own quiet and efficient fashion. Steve provided the wisdom and wit of the old hand, and most of us owed a debt of gratitude at various points of the trip to the great gentleman Asif (his driving wasn’t slow either). Kath and Soni were after their depth progressions following their Sports Diver qualifications, with the unique Patrick as assistant dive manager and warm-water diver Perry bringing down the average experience level.   So no, you don’t need 100 cold-water dives for this trip.

The Isle of Man has some of the best dive sites in the Irish Sea, is famed for wrecks and sea life, but can be treacherous without the local expertise of a skipper like Mike. The weather was amazing compared to the weather of the last few weeks on the IOM.  Most of the dives were close to the dramatic cliffs of the Calf of Man.

Friday, first dive off by 8am to “Kione Halby” on the Calf of Man side at the end of the islands.  An intro dive to around 20m to understand the water and say hello to some of the local wildlife.

The second dive was one of the trip highlights.  Sugar Loaf Caves has clear surface caves (caverns), so you’re into the experience of the ‘Cave of the Birds’ as a V cave for about 100m, with no clear surface only at the end.  Dark, atmospheric, and only doable in calm seas.  Then out to thread the gap between the cliffs and ‘the Anvil’ rock, before cutting through a long, clear-surface passage/tunnel eroded through the headland, called the Fairy Hall.  Then out for a swim in the kelp around the Sugar Loaf, or back around the tunnel.  A truly unique site and a taste of what cave diving might be like without the risk.

Saturday’s tides meant an even earlier start and on the boat by 7.30am to the Borro Bay to the east of the Dragon Rocks.  Wind and tide were in same direction and currents looking pretty strong, so the skipper decided the planned entry point wasn’t an option and moved closer to shore for an ‘in-and-

down’ dive to swim east exploring the gulleys towards the cliffs and around the headland into the sheltered bay.

The first two pairs were rewarded with challenging dives, but under those conditions Kath and Soni weren’t getting their depth progression signed off just yet.  The story of this dive goes to Perry, Patrick and Asif who were last in due to some set up issues on the boat.  Once in, the surge was pushing divers both up and down, making life difficult for Patrick who had challenges on his ears, though the reasons for the in-and-down instruction soon became evident as that left the threesome exposed to a strong south-west current.  The currents pushed the divers down, but luckily Asif had perhaps one of the most powerful torches on the planet; after 3-4 minutes of what could have been a great drift drive if planned that way, but wasn’t, the dive was aborted.  It was my shortest dive on record – for a warm water diver used to sunshine on good visibility there could be no better example of the difference of cold water diving. 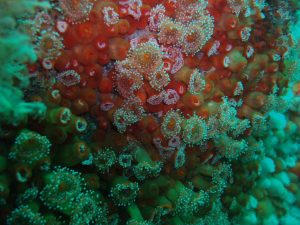 Back up to the café by 10am for a fry-up and a dive review before the second dive at 1:30pm.  This was in the Borro, in a calm bay sheltered from a rough sea for some very shallow diving.  When a pair can come up after 40-odd minutes with a max depth of 4.9m, more of a shallow paddle in the kelp than a dive, it tells you there must have been a lot of great fish and fauna to check out and photograph. As an early taster of things to come, seals were playing in the divers bubbles at the surface, tempting the divers with the odd glimpse but not going down to play.

Preeda gave us all a lecture on the qualities she likes to see in a DSMB.  In case any children read this, I’m afraid it’s not repeatable, I so leave it to your imagination.  Later in the day we trekked off to the local dive shop to look  at and buy shiny things that we never knew we needed. The day was completed by Kath, who cooked for everyone a fish pie recipe she diligently developed in collaboration with her mother and Jamie Oliver.  Evidently no queenies [scallops – Ed] allowed. 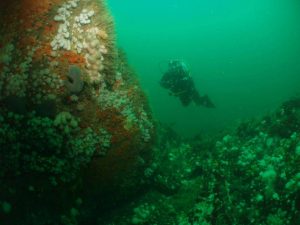 Sunday kicked off at 7.30am again with a dive to the Borro by the Dragon Rock.  Kath and Soni got their 25m progression completed successfully today.  The dive in the channel was incredible – dogfish, spotted catfish, large crabs who don’t like torches shone on them and lobsters.  Preeda and Kath had an amazing dive, which can only be described as vast colourful meadows of large plumose anemones, the further they dived the bigger the anemones, with huge shoals of pollock and lots of ballan wrasse.

The second dive went back to the Borro, further down past Dragon.  Asif and Preeda swam out over the white sand and were treated to an aquarium of different fish for a great dive at 18m.

The evening started out at The Albert and drinks with the skipper and his family, before heading off to the Shore Hotel for a great meal then early to bed. 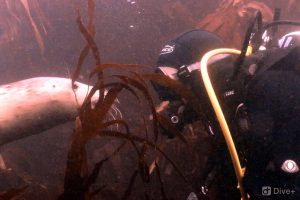 Sealed with a kiss

Monday saw us return to the Borro again as one of the few diveable sites in the conditions, and the pictures show massive amount of fish.  The last dive was perhaps the highlight, a shallow dive in c5-10m near a seal colony.  As the boat drew up to anchor a posse of younger seals popped their heads out of the water to see what was going on.  This is a dive that can only be properly appreciated in pictures and video, so thanks to Steve and Asif for the footage.  Nibbling fins, pats on the legs or back, and Patrick even got a kiss from one – that’s one of Asif’s best shots.

Asif and Steve then had to drive back to Leicester and London, saving a lot of plane fuel as it meant that most of the kit was returned by road.  Some of us headed up to Douglas on the world’s oldest continuously running passenger steam train, followed by a Thai dinner and glass of something. A great way to end a great trip. 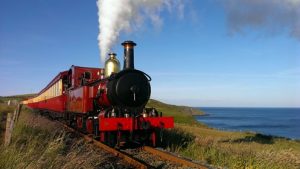