In 2018, four Clidivers went on an exploratory mission to the Lake District. One dive site in particular stood out, and so in October 2019 five of us went for a long weekend to explore it again. We based ourselves in Coniston – a picturesque small town with some excellent local-brewed beer and a pub that does vegan food.

We arrived at the lakes on Friday and had some preparatory dives on the Saturday to get in the flow of things and check we were comfortable with our gear. Our first dive was Vospa on the west side of Lake Windermere. Compared to RIB diving, it was nice to be able to drive to a site and just walk into the water.

We set off with a bearing for a small wreck in the lake, but between the shallow depth and a silty bottom the visibility soon descended on us and became a real test of composure. I’d misjudged my weighting with a pony cylinder and found myself kicking up the silt, at one point enough to envelop myself in a cloud so thick I couldn’t see the light from my own torch. We did find things in the water, but I’m not convinced that any of it added up to a boat.

The second dive at Beech Hill, on the east side of Windermere, was much more successful, although the car park was quite a lot higher than the lake and we had to waddle down (and later stagger up) about a hundred steps, fully kitted up with cylinders and pony bottles.

The vis was good, my trim was good, and we saw some nice things, most notably some eels and, when we surfaced, a wedding. I bet they weren’t expecting divers in their photos!

Before the major dive at Hodge Close, we all assembled for a detailed brief on the risks and how we were going to mitigate them.

Hodge Close is a disused slate mine with a water-filled pit and underwater access to a series of three caves. To access our objective – the first cave – we would go through a tunnel that was quite a bit longer than most of us were used to. It would be cold, dark, and the air pockets in the ceiling weren’t to be breathed.

We made a plan for laying lines and strobe lights so we could always find the way out, and avoid accidentally going further into the cave system — if you see a skull and crossbones you should definitely turn around! We arranged the dives so that each buddy pair would include a diver who had been to the site before.

Unfortunately Elaine had a bad cold and wasn’t fit to dive, but this did mean that she could act as surface cover so we’d get all the diving done quicker rather than in staggered waves.

Most hikers drive to the car park and look down on the quarry from above. It wasn’t so easy for us, as we had to take the van down a steep track so that we could approach from the side.  We then had to wade all our equipment up a stream that took us through a long tunnel, which was waterlogged up to waist level… and dark… and taller people had to duck. Adventure!

…then negotiate the dark tunnel…

The end of the tunnel opened up to a raised cavern above the flooded quarry. We needed to lower our kit – including cylinders and weightbelts – down a ladder to a flattish, rocky area that gave onto a small ‘beach’.

It was a team effort, with a group at the top lowering things on a rope, people stationed on the ladder helping to guide items down, and people at the bottom carrying the kit to the shoreline. I brought a climbing carabiner, which made the process of tying and untying each item a little quicker. We even set up a small drop loop pulley; I would recommend that for next time!

…then lower the kit

Each pair did two dives: one exploring the quarry generally and the other into the mine shaft. The main pit of the mine was an amazing dive. Clear water, dramatic sheer walls, and a bunch of bicycles and transit vans that must have been pushed off the cliff above for insurance fraud or something. We came for British diving and it was a British experience indeed.

However, the real highlight was going to be the enclosed cave in the mine system. We surface swam across the quarry and descended on the far side, above a tunnel entrance at 26 metres, marked by an SMB positioned by the first pair. We then made our way single file along the tunnel to arrive at the cave about 30m in.

We had agreed a turnaround point and laid the markers and strobes to ensure that whatever happened we’d be able to find the exit easily.

It was great. It was a huge space, wide open yet oppressing in its darkness. The size of it sucks the light from your torches, and you have no concept of distance until you swim to the other side. It’s always fun to look up in a cave, and we swam upside down watching our bubbles rise to form a shimmering mirror in the ceiling.

When it was time to turn around we swam back through the dark direct to the blinking strobes in the distance marking the tunnel back out. I later learnt it was 6°C, but at the time I couldn’t tell.

It took a while to traipse everything back to the van, but we were all ecstatic about the dives. We were all happy with the tunnel and the enclosed nature of the cave, and I think we all grew as divers. Niovi called it her best dive ever, and Josh said “I never knew you could get such viz on a dive”. Clearly a UK diver.

On Monday we had time for another lake dive at Bailiff’s Wood on Coniston Water. We parked in a small, empty car park, kitted up and walked straight into the lake. I felt a bit rough and sat it out, taking in the peace of the lake and the environment of the Lake District.

It was an amazing weekend. Some really adventurous diving in the UK in a beautiful setting that felt like a scene from a jigsaw puzzle. I think Elaine put it well:

“If a stinking cold is going to stop you diving and make you shore cover, this is the most beautiful place in the UK for it to happen.” 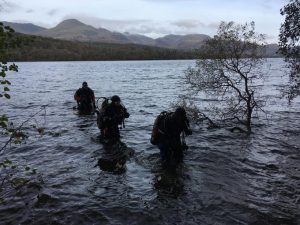 We’d like to thank Kendal BSAC for their support on this mission. Without them, we couldn’t have made the weekend work: there are no gas stations within easy reach, and you do need some local knowledge. Special thanks to Paul Fry, Terry and Gordon, who filled our cylinders, gave us excellent advice and regaled us with their tales.