An eventful start to the season with a trip that managed to coincide with storm Katie, the van door getting bashed in and the wrong prop being delivered for Blue. In true club spirit caution was thrown to the wind (of which there was plenty) and after some careful assessment and discussion between Phil, Neil, Chris and Ben it was decided that the new engine needed breaking in so we’d better go ahead.

With everyone arriving on the Thursday night (some later than others) we got out, fresh faced and enthusiastic, on the Friday morning. A quick refresher dive to help iron out kinks and get people comfortable in their kit again on the Spaniard saw a good couple of metres of visibility (more for the earlier divers than the last pair in) and a promising start. After lunch we took a trip to Lulworth bank for a drift dive with less visibility, or at least less brightness. Dive discipline was the order of the day on a poor visibility drift. The dive was rated a success as Phil managed to catch a decent collection of scallops. With most of the team deciding conditions were looking worse, the planned night dive had a single intrepid buddy pair go in near Portland Castle. With 2-3m depth we attracted some attention from passers-by wondering what the snorkelers were doing out at night. The dive itself was very pretty but a self-inflicted drysuit zip malfunction (I will always double check it’s fully closed before I go out from now on) saw it called off 15 minutes in. I compounded the loss of the dive with dropping my dive computer while getting kit off without noticing. After that experience I would caution anyone on a night dive to think about having a sweep around the area with a torch before leaving as I didn’t notice this until the next day. The conclusion of this first day was a meal at the New Inn with the earlier caught scallops served up as a starter. The evening devolved into arguments about the EU, proving that the topic is even more intrusive and deleterious than the worse caricature of a Brussels bureaucrat. 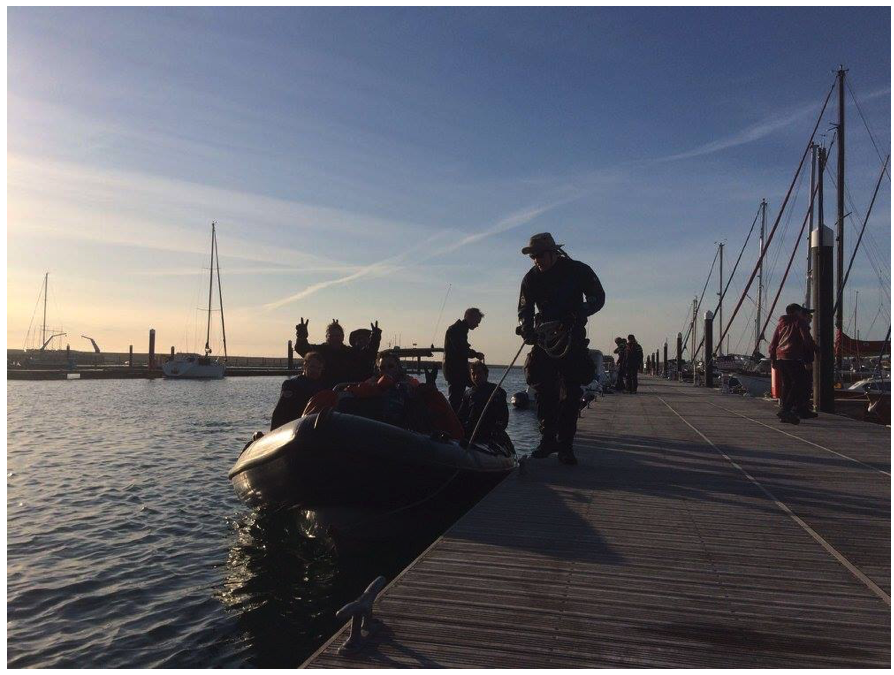 The Saturday was forecast as Force 7, gusting Force 9, to which even the more experienced and adventurous members of the trip took one look at outside of the marina and decided discretion would be the better part of valour. Rebecca compounded this by tearing her neck seal, though several helpful people offered to rent or even lend her a replacement. (Nick’s order of a new made to measure DUI may have greatly encouraged the kindness of the staff at Underwater Explorers). Having come all the way to Weymouth (and needing to get some time on the boat engine) Chris began implementing his plan of training up new coxswains with a few hours of boat handling practice in conditions best described as ‘challenging’ for novices. An excellent learning experience and a sign that even trips without great diving can be very worthwhile. Keith and Carol bid farewell at this point, much thanks to Keith for all his help and sage advice. The afternoon was spent at the Bill lighthouse watching the waves, and really appreciating doing so from the land rather than a RIB. With the day’s activities done we turned to the evening activities, which began with an attempt at strategic networking with the local business community. Others may describe it as crashing the launch party of a new dive shop opened in Portland but that shows a lack of appreciation for the importance of building links. And free wine. 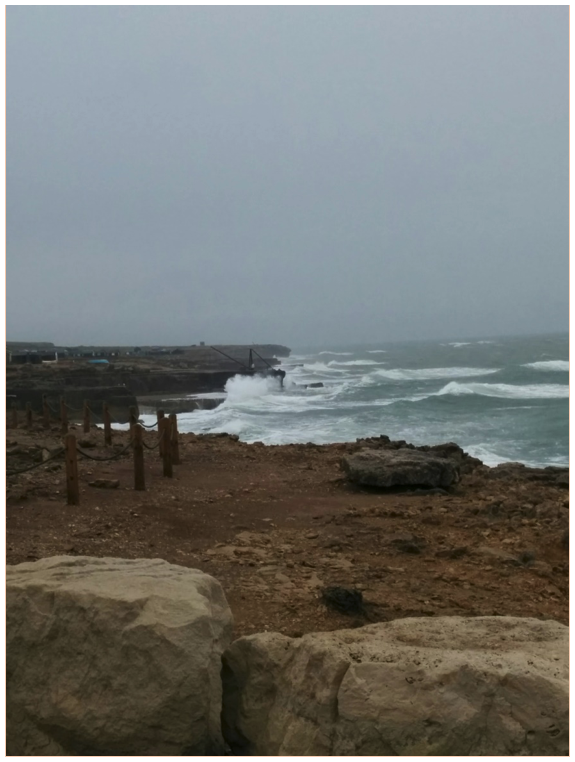 Sunday was to be the final day of diving and after a worsening of the forecast it was decided to start the day with another short expedition out of the harbour to have a look at the conditions in potential sites. Luckily the outside of the breakwater was very well sheltered from the winds and once the boat was back we started kitting up. By this point Rebecca was in Chris’ old drysuit and we were down one dive computer. Adamos managed to save the weekend from suffering further losses by rescuing an errant tenner from the marina. A valuable lesson in the danger the wind posed even to non-divers and just what Adamos will do for £10. The dive was out on the torpedo loading structure, with Nick acting as cox’n, and was widely regarded by all as a bit of a waste of time. There was, being generous, approximately a half metre of visibility and not much to see when you could. Indicative of the quality of the dive all three pairs had a dive time of 27 minutes, no prior co-ordination on this honest! The one bright spot was Phil and Rebecca’s successful use of a buddy line with no incidents or issues, allegedly a Clidive first. The afternoon saw the weather picking up again so we had few more hours of boat handling practice (mooring up in adverse conditions) before landing and loading Blue onto the trailer. For the final evening after saying goodbye to Nick we had a celebratory meal in a civilised restaurant called Mallam’s. Following the theme of the week (sudden and slightly unpredictable changes) we then ended up in the only pub still open, largely populated with 18 year olds braving the stormy weather in T-shirts and high heels. Things went downhill from there with the final stragglers making it back to the hotel about 5am (although almost everyone made it to breakfast the next morning). 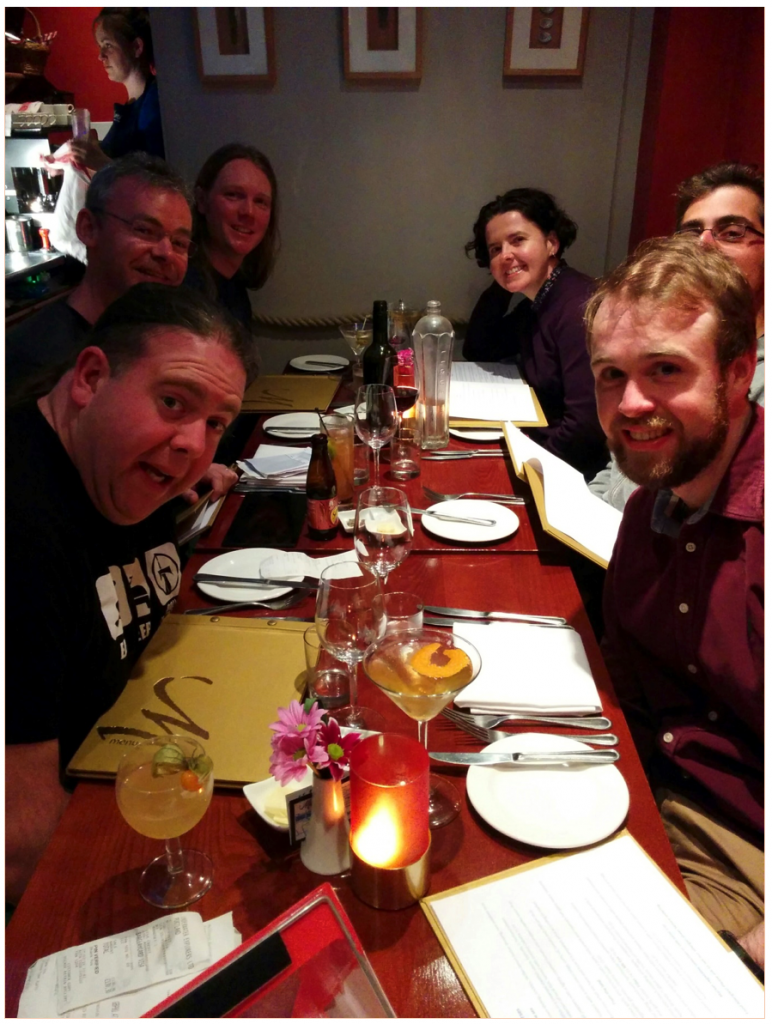 All in all it wasn’t the most spectacular of dive trips but was a promising start to the season. Phil did a great job of getting everything organised, and it was an extremely good example of the importance of adaptability needed for diving in UK weather. Chris’ implementation of more advanced training made a good start and Blue’s new, quieter and more powerful engine made a great debut (and hopefully an even better one when the right prop is fitted to it).