Boathandling on the Thames Nov 2011

I joined the boat handling course not only to get a feel for driving a small boat but also because I have a passion for diving so figured it was something I needed to learn one day, even if I can’t quite afford my own boat just yet. I was pretty nervous about driving on water – imagining myself being pulled uncontrollably by the waves into other boats, however, after spending several hours on two different boats I was confident enough to call myself a cox’n, if only for those couple of days. The course covered all aspects of driving a boat with several hours of hands-on experience over two days. 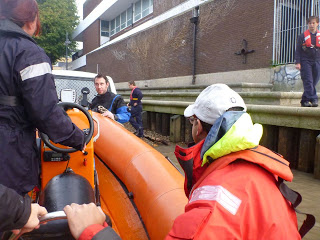 I had no experience driving a boat before yet thought it would be great to learn in the case I ever needed to take divers out to a site or in the unlikely event I found myself abandoned on a boat at sea. We were 6 students and 3 instructors. The day started at the Poplar Rowing Club in order to unload and launch one of the RIB’s (rigid hull inflatable boat) at a slipway then drive it to Wapping where the classroom lessons would take place.
We all brought along warm waterproof clothes, hat, gloves & our own lunch as we were expected to have to stay on the course full time for the two days. Only 2 minutes after meeting were we taught about the different parts of a RIB, and how to prepare it to tow it to a launch site by car. After launching the RIB our teacher drove us to the classroom, much more speedily than I ever anticipated a small boat could drive. We spent half of the first day in the classroom where we listened to three lectures covering: the different types of small boats; equipment on a boat & how to operate one; how to read charts & plan trips; the rules at sea; buoyage; understanding the effects of weather & tide; learning the difference between a GPS device & an echo sounder; and also what to do in an emergency situation & what to say on a VHF radio. We were also taught about sea legislation and learnt how to distinguish between all the different coloured safe-water & isolated-danger marks. Most importantly we practiced remembering which side of a boat is port & which is starboard and where to drive in relation to the red & green coloured buoys at sea and also to always keep a lookout. We spent the rest of the day on a four-stroke engine RIB getting to grips with the most fun part, the steering & gearing.
First we had practice filling the fuel tanks and squeezing the bulb to prime the fuel line (expelling any air), and also turning the engine on after clipping the kill button cord to anything it would clip to on our clothes. We drove at both low and high speeds getting a feel for the difference in handling the steering. We were trained how to speed & turn, reverse, approach a buoy and also drive up to & reverse from the shore – should one want to drop off divers. We spent the rest of the time driving out to sea, or actually only a few hundred metres past the Thames Barrier before returning back to the pier & receiving a de-brief of the days tasks. In the early hours of Sunday we stood on the pier practicing rope knots & hitches, which was not really the easiest thing to learn first thing in the morning (yet it was lots of fun). The rest of the day was spent on the water, this time on a 2-stroke engine RIB. In turn we drove under the ten bridges to the Houses of Parliament, then returned back to the Tower of London, where we ran through more skills such as: learning how to deploy an anchor in a current and also retrieve it again; how to approach a dive site (in our case a buoy) to drop off divers and how to use the current to pick them up again. We also practiced how to speedily spin the boat around & get back on its course in a ‘man-overboard’ situation and how to moor the boat alongside the pier, where we then needed to try our best to remember how to tie the right knot in a rope. From the whole wet-eyed weekend of speeding along the Thames’ surface, I think I most enjoyed flying over the bumpy waves and practicing the super-fast spinning-the-boat-around task as it was something that I feared beforehand, thinking one of us might actually fall out, into the chilly river on the steep turn. It was also good to learn how to anticipate and avoid a collision with any other vessel, in one of the lectures we had, yet luckily none of us actually had to put this into practice. We were also able to admire the sometimes-nice, sometimes-wacky architecture along the Thames. Overall the two days boat handling were a good addition to the BSAC Chartwork & Position Fixing course as well as a great basis for the VHF radio course & the BSAC Diver Cox’n assessment. The final words we were left taking home were ‘practice, practice, practice’. 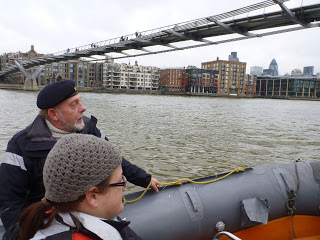 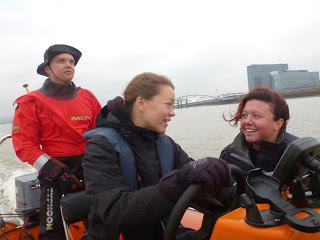 Thanks to Joli, Don, Andy and Gary for teaching on this course!
Posted in News
In Archive