This was one of the first UK Clidive trips this year. It started on Thursday 14th April, when most people headed to Plymouth. Everyone was concerned about traffic jams because of the Easter holidays, but surprisingly we found the roads relatively empty and no one reported any issues. Special thanks to Gio and others who arrived early to get the boat ready for the next day. 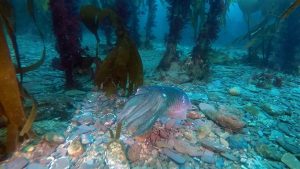 Day one: Tinker Shoal and fog at the fort

Friday was our first diving day. We planned to leave the Mount Batten pontoon after a 7:30 breakfast and after a quick dive briefing we put all the gear into Yellow.

We planned our first dive between the East and West Tinker cardinals, outside the breakwater. When we arrived we threw a buoy on the water to double check the direction of the current. After some discussion, we decided to dive from east to west and use the topography of the reef to protect us from the current. There wasn’t too much current and the dive was a perfect opportunity to practise some skills, like deploying the SMB.

When we were almost back at Mount Batten, we heard an unexpected message on the VHF radio, which was tuned to channel 14 (Plymouth Vessel Traffic Service – i.e. the harbour master). It was from a guy with a jetski, who, in a very calm voice, said something like: `my vessel is sinking and I need help`. It wasn’t a mayday or pan pan, but a simple call for help. After berthing on the pontoon Phil sent a message to harbour master that we had ended the dive operation. They enquired if we could see the jetski, but we were too far from the bay.

After crisps, sausage rolls and full cylinders we were ready for our second dive, destination the Breakwater Fort. During the briefing someone said that the area is used for underwater welding training and it looks like diving in another world. During the dive I saw a bunch of rusted metal, one lobster and a few fish – nothing particularly exciting! 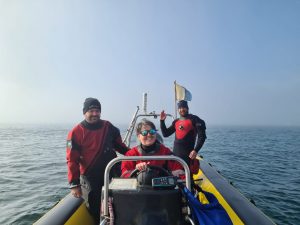 Fog at the Plymouth Breakwater Fort

While we were waiting for the second wave to surface, we noticed some fog on the horizon. After a few minutes we heard someone on the radio who was on a large ship say that they couldn’t see their stern light and the visibility had dropped to 10 meters. Fortunately, our conditions weren’t too bad and we were able to wait for the divers to finish. We messaged the harbour master to check if it was safe to return and they told us to wait for a bit and we spent around half an hour tied to the Breakwater Fort waiting for the thumbs up. Motoring a few miles from the fort to Mount Batten took more than an hour, although Rebecca was confident at the helm and we returned without problem.

Day two: no to the Coronation, yes to the Scylla, no drift on the Mewstone

On Saturday morning the plan was to dive the Coronation wreck, however at breakfast we noticed it was still foggy. Sailing in an intense fog hearing ships’ horns without seeing them hadn’t been much fun the day before, so we decided to wait a few hours before leaving the marina. Ben and I spent some time walking around and climbing Mount Batten. We had a great view of Plymouth and learned some history related to the second world war detailed on a sign post. 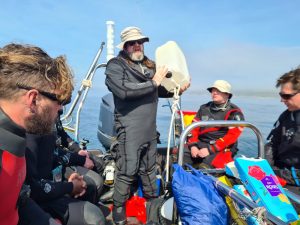 Recap on how to prepare the shot

Gio decided that diving the Coronation wasn’t an option because of the spring tide and the time. Instead, we decided to go to the Scylla wreck. This was my second time and it is a site that I particularly like, mainly because the wreck is largely whole and you can clearly see the ship. Swimming along the ship’s side without touching anything is, at least for me, an interesting buoyancy practice. The dive was great with visibility around 4 or 5 meters.

Back at the marina, cylinders recharged and we headed to our second dive: Mewstone Ledge. A relaxing shallow dive with a lot of kelp. The idea was to do a drift dive, but the current wasn’t strong enough.

We finished the day eating at The Clovelly. This was my favorite restaurant – good variety, value for money and especially the tasty fish and chips.

Day three: not quite the Coronation, just about the JEL

On Sunday, we were able to head to the Coronation because Gio had cleverly booked the Coronation for two days, in case something went wrong on the first day. The Coronation sank in the 16th century and the only remaining parts are two anchors and a few canons. Dropping the shot in the correct place was tricky, because we could only use the GPS coordinates provided by the Coronation project, but we managed it on the second attempt. Looking at the shot position and the map of the Coronation, we thought the anchor was only about 10m to the northeast of the shot.

My buddy and I were the first ones to jump in the water. At a few meters, the shot line started shaking and the current was strong. At the bottom, at around 20m, we tried to swim to the anchor and after 5 minutes not going anywhere we gave up and decided to return to the surface. It was a good drift! When we reached the surface the shot buoy was far away. Even a First Class Diver in our group considered the current too strong and not an enjoyable dive. A pair of the second group of divers decided to skip and the other did a drift dive. No one managed to find the wreckage.

The second dive site on Sunday was the JEL. (James Egan Layne). Because of tiredness and fear of strong currents I skipped this dive, but most of the group did it. The second batch of divers reported strong currents.

Monday was the last day, with a single dive planned. After some discussion we decided to dive the Elk. It was a good choice because the wreck was at 30m and that would limit our bottom time. One of the coxes didn’t fancy the dive, so we had a dedicated cox and all the pairs could go more or less together to save time. 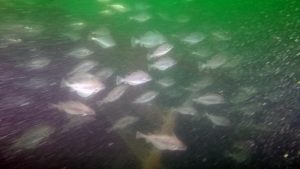 Too many fish to see the Elk!

My buddy and I were the last ones to go into the water. We were assigned the task to remove the In Deep shot we had been using. The dive was short, with no current and we managed to see the entire wreck and at the stern we found a large shoal of fish. The small anchor at the end of the shot was a bit challenging to remove from the wreck.

When we returned we got the boat out of the water, cleaned it and prepared the van to go back to London. Because we shared all the tasks, we still had time to have a light lunch at a restaurant near the marina.

Overall the trip was really interesting with a variety of dive sites and no major problems. The discussions between Phil and Gio added a special touch of fun. The most important fact was that everyone on this trip looked out for others and tried to help where they could. This was the first trip of the season in the UK and I’m looking forward to the next ones. 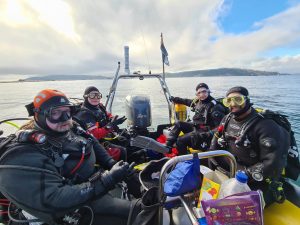