Cooling off in Scotland: Clidive’s expedition trips to Tobermory and Oban 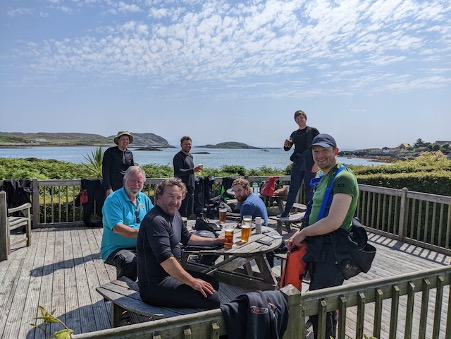 If there was one week this year to choose to escape London for the Hebrides then our week in Tobermory was it. The 40ºC heat tsunami that hit London was a glorious 27ºC millpond in and around the Sound of Mull for some fantastic Scottish diving this July.

In total 14 Clidivers took part either in the week-long Tobermory expedition or the 4-day mini expedition to Oban that immediately followed it. A couple of us put the two together for 10 days of diving, though a mis-firing rebreather meant I took a day off in Oban and became dedicated Cox’n for a day. Conditions were not always boil-in-the-bag hot, towards the end of the expeditions we had to put up with cold winds that whipped water from the surface of the sea. But we dived every day come what may.

The Tobermory crew benefitted from the experience of Colin who was also dedicated Cox’n for the week. Not only does he know all the best dive sites he was also a fount of knowledge for all the best lunch spots where we could take advantage of the glorious weather with great local food and stunning views.

The conditions early in the week were perfect for exploring the reefs and pinnacles of Coll, Muck, Eigg and Bo Faskadale with the odd wreck thrown in for good measure. All good dives and some great dives. The stunning sheer walls of Bo Faskadale are the Northern cousins of Hatt Rock and Hands Deep. Familiar and majestic yet subtly different in the life that covers them. Whether it’s the wrecks or the reefs the white, pale pinks, pale oranges and reds of Plumose anemones, Dead men’s fingers and Red fingers are everywhere interspersed with Jewel anemones, Cup corals, Daisy anemones and Sea squirts. Huge inquisitive Wrasse and Pollack and Long-clawed Squat lobsters are ubiquitous. Apparently the place was festooned with nudis but I’m useless at spotting them so I’ll have to take others’ word for it. 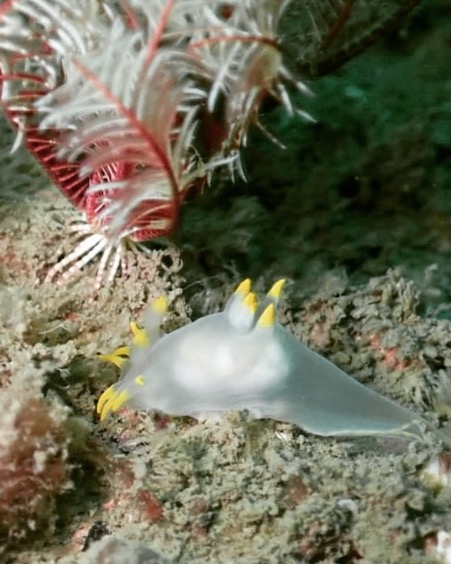 Pollycera faeroensis. Apparently there were lots of them. (Photo: Richard Kelly)

Later in the week as the winds picked up and temperature dropped we concentrated on the world-class wrecks in the protection of the Sound of Mull. Pretty much everyone’s favourite was of course the Rondo hanging vertically off Dearg Sgeir which allows you to pick any depth from 50+ metres up to 6m where you decompress or do your safety stop admiring the life all over the huge rudder watching the jellies drift by. But the Shuna and Hispania are not far behind in the great wrecks stakes and all of them are just buzzing with life. 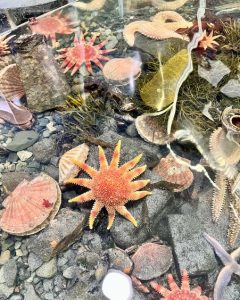 Our Sunstars making themselves at home in Mull Aquarium (Photo: Nick Barter)

Air fills at Tobermory were provided by the lovely people at Mull Aquarium who were ever helpful. We returned their generosity with two species collection dives returning with buckets of Sunstars, Spiny starfish and some nudis to replenish the Aquarium. Every 4 weeks they return the animals collected to the places where they were collected and love their visiting divers to help out with collections.

Post dive libations normally started at the legendary Mish Nish before heading back up the hill to our holiday homes where nightly diver-style feasts were prepared by willing volunteers while the next days planning took place. On our last night together we took a tour of the Tobermory distillery, bought some whisky, had a Ruby Murray and tried a couple more of the local hostelries. Diving was optional the next morning. 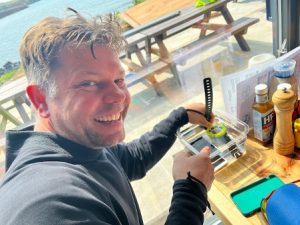 It was a fantastic week above and below the surface with special thanks to Nick S for organising and Colin for providing Nick with his pearls of wisdom. Also congratulations to Richard for completing his Advanced Diver. And finally RIP Nick’s iPhone which didn’t care for a 30m dive on Bo Faskadale anywhere near as much as we did!

And so to Oban. Overcoming a couple of logistical issues on the way including keys locked in a car and keys being in Mull when required in Dunstaffnage, Yellow, the Van and the trailer all arrived at Puffin Dive Centre on Kerrera Sound by Friday evening ready for diving on Saturday.

The weather was certainly not as kind to our Dive Manager, Ian, as it had been to Nick in Tobermory. The heatwave had certainly long gone but that wasn’t going to stop us. Spirits were high for the superb checkout dive that is SS Breda in Ardmucknish Bay.

This was followed by one of those dives that promises little but delivers something memorable. Off Eilean Mor at the entrance to Dunstaffnage Marina is a small wall no deeper than 20-25m. At 12 m is a deep horizontal fissure that extends for many metres along the reef. It is populated by a large number of huge Congers peering out at you along with several massive Grandaddy lobster grumpily guarding their space. Fish and crab try to claim smaller spaces along the way and little territorial disputes were everywhere. Its fantastic. I just wish I’d taken my camera! 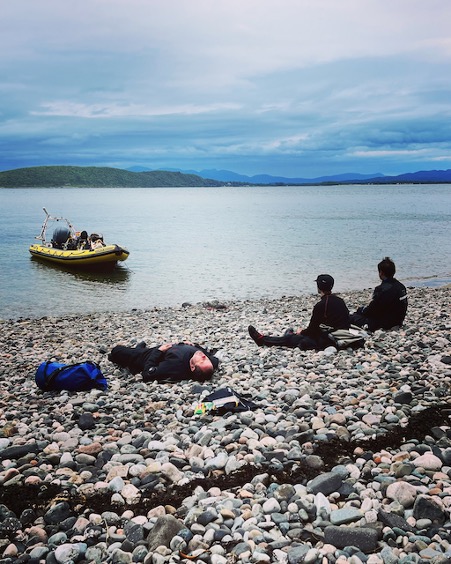 Sheltering from the wind at Dunstaffnage Castle (Photo: Nick Barter)

The next couple of days were impacted by the weather. Plans to go further afield to explore places like Torran rocks had to be abandoned but the relative protection of Kerrera Sound provided opportunities on the walls of Heather Island and Aird Na Cuile for both days. 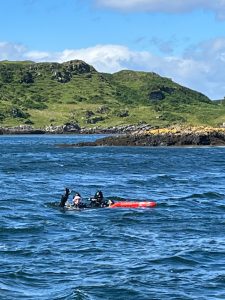 An attempt to find protection from the Northerlies on the South Coast of Mull on the third day involved a long RHIB journey in confused seas and fierce winds whipping us with stinging flying seawater. We were ultimately unsuccessful but the cold and wet was mitigated by sightings of Eagles above cliffs, deer navigating steep rocky faces, and Octopus back on Aird Na Cuile, as well as an unexpected hoard of welly boots populated by an absolute host of squabbling Squatties beneath Heather Island.

A final day in the protection of the Sound of Mull and Ardmucknish Bay saw a return to SS Thesis which was also dived by the Tobermory week as well as a final dive on Bogha Grabh Aird with hundreds more Squatties populating the entire bank below the shallow reef.

We recovered Yellow for a well deserved clean after 10 days in the water and thanks to a very thorough and seamanlike Martin this included the horror-show that is the the anchor locker. Yellow was left at Puffin Dive Centre ready for the August Barra expedition to collect on their way through, and will stay in Scotland for the August Bank Holiday St Abbs trip. If we are going all that way we might as well make the most of it! 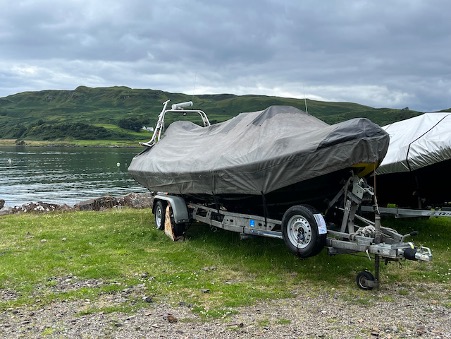 Its not a bad spot to hang out for you next adventure (Photo: Nick Barter)

The trip was rounded off with a great dinner at the Eeusk Scottish restaurant in Oban where local produce and a fine whisky selection helped us debrief and recount our tales.

Special thanks to Ian for organising the trip and navigating the weather obstacles. We couldn’t do everything we wanted to but had great diving anyway and now just have more to do next time!

If you didn’t make it onto one of our expedition weeks this year make sure you get on them next year. They offer fantastic diving, a chance to learn new skills, and you get the opportunity to really get to know more of your fellow Clidivers generating shared memories that last for ever.