Sun and Storm – wrecks of portugal

Tempted by the promise of warmer weather and some good wreck-diving, I and six other Clidivers spent an extended weekend in Lagos, Portugal. The water temperature was a little cooler than we had expected [that’s actually a bit of an Aussie understatement! Ed], at around 15C (we’d been told 19C) – a little too cool for comfortable wetsuit diving, so most of us were in drysuits. But above water the mostly sunny weather was very pleasant.

Unfortunately we missed a day’s diving on the Saturday as the conditions were worsening to a 5/6, due to Portugal enjoying the tail-end of Hurricane Joaquin. However, we did have a great afternoon enjoying the sunshine, once the torrential rain passed over…

We dived four wrecks over the weekend: Zambeze, Almeida Carvalho, Hermenegildo Capelo and Oliveira e Carmo. We all dived on nitrox as the wrecks were in the 20-35m range, enabling a short surface interval on the RIB and good time to see the wrecks on both dives without deco.

The wrecks were Portuguese Navy vessels sunk as part of the Ocean Revival http://www.oceanrevival.org/en/ project to attract diving tourists. They are sufficiently intact for interesting dives, with lots of penetration, while still being well prepared for divers and attracting masses of fish [and a very large octopus – Ed]. Access to the wrecks was easy, via a buoyed shot line, and although the visibility wasn’t as good as we hoped, we had great dives.

Lagos is a good-sized tourist centre, with an old town and a variety of restaurants serving some delicious Portuguese food. The evenings were still warm enough to warrant post-dinner ice creams and brandies out on the terrace. Definitely a change from Portland! 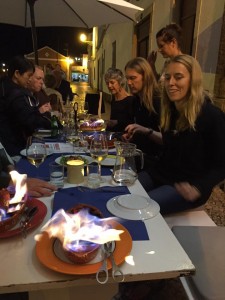