Clidive worked out long ago that, being a London club, it needed a van. An ever-decreasing number of members owned cars, or even had driving licences. Even the car-owners no longer had vehicles capable of towing the club RIBs, which had got longer and heavier as our diving ambitions increased. Owning a van meant we could tow, launch and recover our boats AND transport members’ dive kit while they travelled in comfort by train. 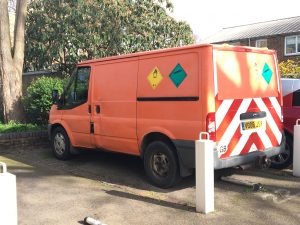 Our most recent vehicle, bought in 2012, was the redoubtable ‘Clidive Orange’ – an ex-RAC Ford transit. Orange was a workhorse, born and bred.

It’s previous role meant it was equipped with a tow bar (rare in a transit) and various mysterious storage boxes. These were great places for packing away lots of  bits of useful diving- and boat-related equipment and promptly forgetting about them. It also boasted a convenient, long metal tool drawer, which worked perfectly for storing weight belts – at least until the fatal combination of metal and seawater took its toll.

Eight years on, it also had an impressive array of dents and scratches, the result of countless club members manoeuvring a large vehicle around the unforgiving streets and parking bays of London and the narrow lanes of Devon and Cornwall. 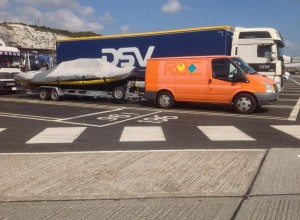 Orange heads to the Med with Yellow in tow

Built to last and built to travel, Orange did both. It not only towed our RIBs and transported our kit the length and breadth of the UK, but regularly ventured into Europe. It braved the autoroutes of France on several occasions, towing Yellow down to the Mediterranean; and on one occasion it tested its metal on the autostrad of Poland, loaded to the gunnels with cylinders and dive bags for a trip to the Baltic.

In 2019, the year of our 50th birthday and three expeditions, it covered well over 1,800 miles in a single three-week period, towing the RIB from London to Handa Island in the far north west of Scotland, thence to the Orkney Islands for a Scapa week, to St Abbs for a long weekend and back down to London, before heading over to Ouistreham in Normandy, still with the RIB in tow and now carrying a compressor as well as a full complement of kit.

Unfortunately, Orange spent the week in Normandy parked in the driveway of our rented house, gently weeping oil as the local garage owner shrugged in suitably gallic fashion.

And so we finally had to face up to the truth: Orange’s days were at an end. The committee briefly toyed with sinking the van in St Andrew’s dive lake in Kent, complete with commemorative plaque, but shook off such sentimentality when we realised the amount of work that would be involved. Instead, it was driven away by a shady character, who reluctantly handed over £320 in cash after some hard bargaining. 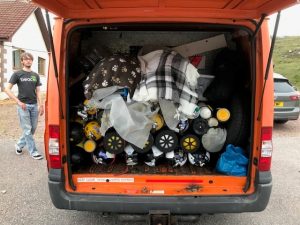 Oh well, it was just a van…and so the search began for a new one. Not an easy job since, although the world is full of Ford Transits, it is NOT full of Ford Transits that have the necessary 3,400kg of gross vehicle mass that enable it to tow a two-tonne RIB while carrying all our dive kit. It also had to be relatively new in order to meet the new Euro 6 regulations, and relatively cheap in order not to exceed our budget.

After several weeks of prolonged internet searching, many phone calls and a couple of abortive buying trips, van officer Nick Harrison travelled to Southampton to view one that seemed to fit the bill. A test drive and some chin-scratching later, the members of Clidive had become the proud owners of a nearly-new, charcoal grey, (virtually) scratch-free, air-conditioned van, complete with Bluetooth, a working entertainment system, electric wing mirrors and parking sensors! 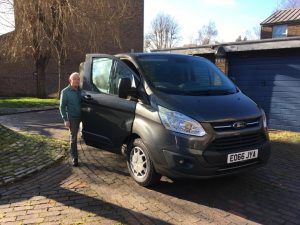 On Monday 9th – just beating the ban on non-essential travel – Nick again took the train to Southampton to collect the new van, now equipped with a tow bar and with the trailer electrics mounted on the roof, making them rather less likely to be regularly immersed in the briny.

That’s not the end of the work, of course. As a standard Transit, the van is a blank canvas, onto which we have the opportunity to project all our hopes and dreams, based on years of rusted tools, inaccessible spare parts and nobody having a clue what’s in the van or where. 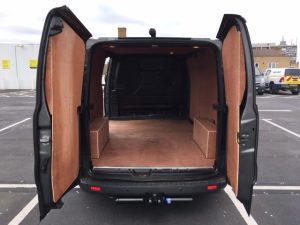 Plans are afoot to kit it out with convenient, accessible cubby holes, high-level dry shelves, robust storage containers and – wonder of wonders! – a laminated list of contents, so that we can stop buying a new strop every time one breaks, even though somebody stored a whole bundle of them in the van years ago.

Finally, we need a new name. Yes, we could call it ‘Clidive Grey’ (and, to be honest, probably will). But there have been bids from the more imaginative for ‘Clidive Stealth’, ‘Clidive Shadow’ and ‘Clidive Smoke’. Any other thoughts? Write to me at elaine@clidive.org if you have a better suggestion. The committee (or maybe just Nick!) will have the final say.