I completed my first diving trip this weekend in Plymouth. I want to thank everyone in Clidive for their support, training and companionship. It was an unforgettable experience which has hooked me into diving.

All the training in the pool prior to the actual dives helped me gain valuable skills, and that meant I enjoyed my dives even more. I’m sure in time everything will be even more fun as things like buoyancy control and ear pressure release becomes second nature to me.

Everyone was very helpful and friendly, John being an excellent instructor and dive partner, Ben being a trusty organiser and planner, Orlando being a fun and friendly companion, and everyone else generally being a great team to be with.

Here’s a short summary of my experience from the weekend:

I arrived in Plymouth Mountbatten Centre late Friday evening around 10.30pm where I met with Bart and Niall at the reception. We then joined the rest of the group in the pub and had a few beers and chat. Ben gave us the plan for Saturday with places and times, as well as buddy pairs. My first dive on Saturday was planned for 10am with the second one shortly after that, at 1pm.

Even after a day’s work in the office and covering over 250 miles coming from London, I still couldn’t sleep much with the excitement of the next day.

We woke up early on Saturday and after the breakfast, started sorting out our kit. Time past pretty quickly and before I knew it, I was going out on the RIB for my first dive ever in the UK. My biggest worry was the cold water, because I’m quite sensitive to water temperatures. I had a t-shirt under a 2.5mm shorty, and a 5/7mm semi-dry suit on top of that, and I had no idea how the sea temperature at 10 degrees was going to feel like.

We got on our bright yellow RIB which was the best boat at there with its powerful engine, and got on the way to Cawsand Bay, our dive site. Once we reached it, Ben gave a briefing on who will dive first and how he’ll drop everyone, explaining the procedures. John and I had a quick plan of what we’ll be practicing, such as mask clearing, air supply drop/recovering, etc. We finally did our buddy checks and when we signalled Ben we were ready, he started counting…

Three…Two…One… and we were off! Loads of adrenaline as I was quite apprehensive of the cold water hitting me with a shock… But then I was pleasantly surprised to find out that it was not bad at all! At first I felt no water coming in at all, then it slowly trickled into my suit, but it was completely bearable. That comforted me a lot and once signalling the boat, we started on our first dive.

We went down to 8 metres on that dive. I had to adjust my buoyancy a bit more than I did on the pool because of the difference in my suit and weights, also the difference in the sea water density to pool water. Once I got used to it, I felt like I was doing this all my life! We did our exercises and then enjoyed the underwater scenery with good visibility, finned around a bit, held a crab, and got back up after 29 minutes. The first dive was over and it was a very smooth and enjoyable dive thanks to John and Ben. The water was 10.5 degrees and even after half an hour of exposure, the only area I felt the cold was the tip of my fingers.

A warm soup and some chocolates later, we headed back to shore, during which I had a chance to drive the RIB for a while and it was a big thrill! We had a quick lunch on shore and had our air refills sorted, and then went to our second dive of the day. 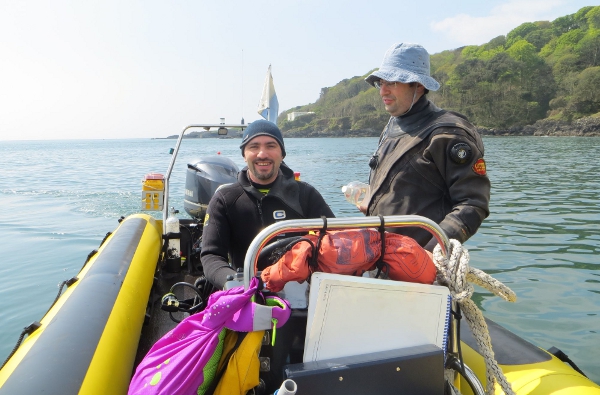 Taking the helm of Clidive Yellow

On the second dive, it was a similar site which we went down to 6-8 meters again for another 30 minutes. We practiced some other exercises there such as mask removal and refit, which I found trickier with 5mm gloves and freezing water gushing on my face, but I managed that successfully. Then I did a controlled buoyant lift “rescuing” John, and completed the second dive.

We got back, left the cylinders with In Deep for a refill, packed our BC and regs, and changed to warm clothes, leaving my suit in the dry room, hoping it would dry back up for the next morning. 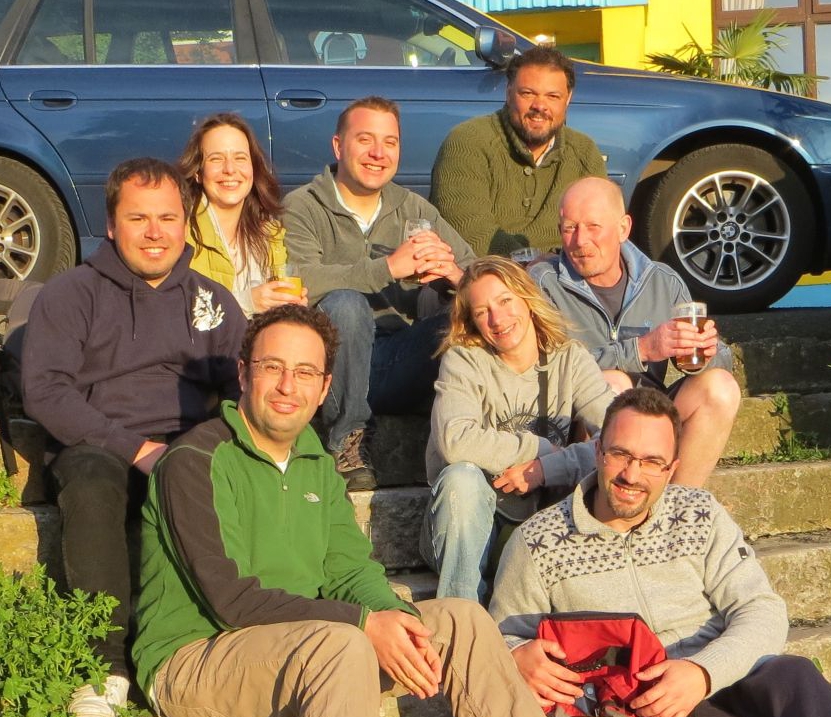 Relaxing outside the Clovelly after a long days diving

We went out to a cute little restaurant/pub called the Clovelly Bay Inn and had a smashing night with the group, chatting about our experiences, sharing jokes and having a few pints. Ben gave us the plan for the next morning, which got me excited again.

My first dive for Sunday was going to be at 8am at a lighthouse 12 miles offshore! And we would then top it up with an even more exciting dive to a shipwreck shortly afterwards!

I was thinking I wouldn’t be able to sleep again with excitement, but I was so tired with all the lifting and diving, I slept like a baby that night.

We got up early in the morning and prepared to go out again. We left the dock right on time and after a 40 minute journey, reached the first destination of the day, the Eddystone Lighthouse. What a sight! There was a great big lighthouse sitting right at the top of a tiny rock. I can’t imagine how hard it would have been to build it in Victorian times.

Unfortunately Sunday weather was not as lucky as Saturday’s and instead of sunshine we had clouds and even a bit of drizzle in the morning. Also starting early on, my core body temp was not that great. However, I still felt fine for the most of the dive, and we even went down to 20 metres. We had another 29 minutes of diving together with John, enjoyed the rocky areas and observing starfish, sea urchins, and some dead man’s fingers. I had a bit of trouble keeping my head down and I was constantly correcting my position with my hands. John recognised this and it appears my weight belt turned around when my suit shrank at depth. He helped me tighten it up and turn it around so I could get my balance correctly, after which I felt much more in control. 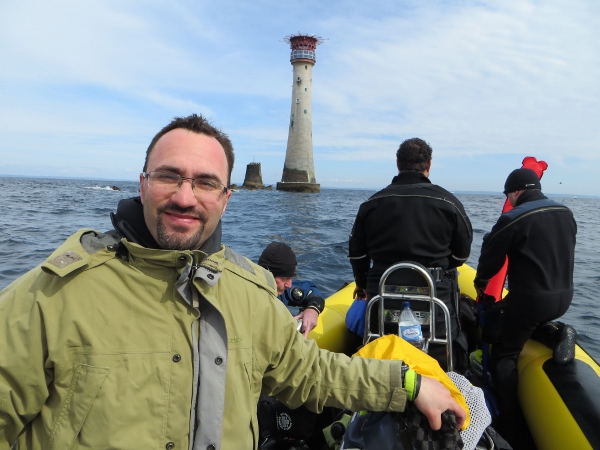 Also on this dive I did my first simulated decompression stop with John. We stopped for 3 minutes at 6 metres. It was not the easiest thing to hold on to my bc inflator with one hand and check my depth gauge with the other, while trying to also hold on the shot line. It was much easier to stay still in the pool with no currents or nothing to hold on to, but in the sea, it becomes much trickier. Something I guess I’ll improve with time.

The journey back was long and shivering. I realised that it wasn’t the dive itself that I should worry about, but it was the windy and wet journey back to the shore that really makes me feel the cold. Thankfully we had nice and warm soup again, and my trusty raincoat, and sitting down in the back of the boat also protected me from the wind, which is a tip I got from seeing John and Bart.

As we had a quick lunch, I sat down with John and went through BSAC tables to exercise my understanding of the codes. I calculated the surfacing codes for Saturday and the code for our first dive on Sunday, and estimated the length and depth for the final dive, counting in the hours we would spend on our surface interval.

The Wreck of the James Egan Layne

Our final dive was to the wreck of the James Eagan Layne. It was the best ever out of all dives I had this weekend, although it was the coldest for me. We went down to a maximum of  20 metres for another 31 minutes this time, and John lent me his torch which I enjoyed using, looking around at the structures and fish. Everywhere I pointed the torch beam, I could see colours coming to life with their wonderful tones. The wreck was awesome, and having good buoyancy control becomes really important when you have wreckage all around you. A good torch is at the top of my shopping list now.

Although I enjoyed this wreck dive the most, I also felt quite cold, as the water temp got down to 9.5 degrees. I signalled John that I was feeling cold, so we finned back to the shot line and did a slow descent to around 6 meters, where we did a safety stop. It was very tricky to maintain the correct depth while holding on the shot line because the line goes up and down by itself even if you hold tight on one spot, you find yourself fluctuating between 3-6 meters. However, the stop was not mandatory and only advisory, so we were ok. Temp also improved at that depth so I could stand it for another 5 minutes.

We finally made it back to the boat and warmed up with nice hot thick soup. We then got back to the shore, packed up and emptied our equipment from the boat, which was then loaded on the trailer and attached to the van which we also loaded up. Everything was prepared and tightly packed for return journey, and we parted ways with smiling faces and very happy memories. 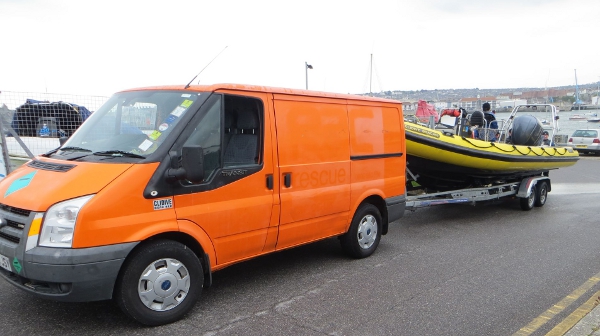 All packed up and ready to leave

I enjoyed the team spirit a lot. It was really nice to know that when I handed over my BC and tank to the boat after a dive, someone would then pick it up and store it tightly without me having to worry about doing it, as I would be concentrating on getting my hands on a warm soup and my raincoat. Likewise, as I was lifting someone else’s equipment to the boat, I was doing the same. This is a very good feeling, knowing someone’s always taking care of you and you taking care of others in return.

This sharing of duties continues everywhere, on the water, off the water, loading/unloading/sorting equipment, washing off, kitting up, etc. It makes you feel you’re a part of a family and makes you feel safe and secure.

I even got rid of my fear of diving to dark and deep waters. In the past I would never have swam on waters that I couldn’t see the sea floor from the top. On this weekend, I dived comfortably without fear knowing John and the others would always watch my back.

I took away many memories and experiences from this first dive weekend with me. I tried to share some of it here on my report. I hope it will be useful for someone who is curious how the first dive experience with Clidive would feel like.

I’m now looking forward to completing the written test, and getting my Ocean Diver qualification. I’m also very keen to do Sports Diver and take my skills to the next level.