First UK trip of the year 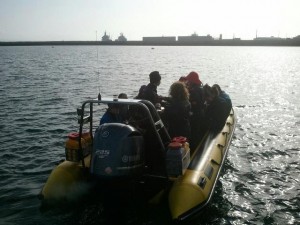 After three blown out trips so far this year, it was a with great relief that I was able to say “Portland is go!” on Thursday morning. Following weeks of gale force winds battering the south coast, the winds were easing off for a few days and we were determined to get in the water. The plan for the weekend was to use Clidive yellow, running three waves each day to ensure that all 13 divers were each offered two dives.

The boat was fuelled and in the water early on Saturday morning, ready for a 9am ropes off for a shake down dive on the Landing Craft and Bombardon Unit in Portland harbour. New dry suits tested, weighting issues sorted and a little bit of lost kit later, the divers returned ready for some hot drinks as they had discovered the water temperature was a chilling six degrees!

The only dive we really had to stick to the schedule on was the Aeolian Sky, 12 miles from Portland marina. Slack was at 12:40ish and we were running a little late so I was pleased to see that both of Scimitar’s hard boats were on site and had already put a shot in. I had wanted to dive the Aeolian Sky for quite some time, but had unfortunately not made it out of the harbour on previous trips. Today however was not to be the best of experiences. At 20m it got very dark and at 30m it was pitch black with 1m of visibility at most with torch light. It would be very easy to venture into the holds without meaning to. From the little that we could see, I’m sure it would be a cracking dive in good visibility.

The final dive of the day was to be a drift dive on Lulworth Banks. The visibility here was slightly better than on the previous dives, but still pretty low. A pleasant drift all the same.

A curry at Balti Island and some beers rounded the day off nicely.

Due to the low visibility on Saturday, the plan for Sunday was to dive some shallower dive sites in the hope that they would be brighter. The first dive of the day was on the Countess of Erne in the harbour. As hoped, the visibility was much better than any of the dives on Saturday and nudibranchs were spotted all over the wreck.

Next up was the Black Hawk bow out towards Worbarrow Bay. The wreck is very broken and has lots of cracks for congers to live in, but no congers were to be seen.

The temperature and visibility meant that by the final dive, there were only two divers that wanted to get back in! Balaclava Bay was the final destination to look for scallops, but the scallop hunt ended after all of 15 minutes.

Despite the low visibility and cold, we had a great weekend. It was nice to just get out of London. I did some of my Advanced Diver, one of the group got some boat handling practice in in preparation for their diver cox’n exam next weekend and another did some trailer practice, and best of all, Paul saw four fish!

Hopefully the water heats up a bit before the May bank holiday!

Tagged with: portland
Posted in Dive Trips, News
In Archive