The Summer Isles are a group of small, mostly uninhabited islands located just off the coast of Loch Broom, in the far northwest of Scotland. The area had been on Clidive’s radar for a while but undived by the club until this year, largely because when it comes to the west coast of Scotland the choice of dive destinations is so great that even a spot this good has to wait its turn. Well, in August this year eight intrepid Clidivers finally made the trip and it did not disappoint.

This was my third trip with Clidive to the west coast of Scotland and the previous two forays had seen conditions ranging from pristine (Knoydart, 2015) to…less than pristine (Mull, 2016). So I had my fingers crossed for a repeat of 2015’s conditions and the weather gods did not disappoint. Note: it has since been brought to my attention that when it comes to Scotland the weather gods might actually be our very own Nick and Elaine…apparently they and rain and driving winds are never to be found in Scotland at the same time. If I’ve broken the run of luck by committing it to print I apologise in advance….

Sitting down to write this trip report later than planned, memories of the week have already blurred into one long, blissful haze of flat calm seas, hyperactive dolphins, pissed off octopus and red wine. So I will spare you the day by day breakdown and opt instead for the condensed highlights, in the tried and tested format of a top-ten UP/DOWN. Because if it works for interior design trends and celebrity spotting, it should totally work for Scottish diving.

Ten: UP – Easyjet London Gatwick to Inverness. I have a soft spot for the sleeper train, but flying gave us all the opportunity to arrive mostly awake (shout out to Neil who had travelled straight through from…Australia….catching up with us all at Gatwick only a few hours after getting off a flight at Heathrow, one pint already down). Giving us ample time to stock up on supplies at Ullapool Tesco and fit in a cheeky pint or two at the very inviting local before dinner. 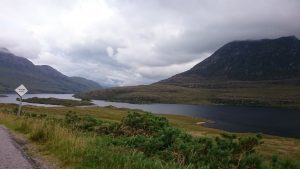 The drive from Inverness via Ullapool, looking scenic

Nine: DOWN – Beach accessories. Accommodation was a matching pair of very well outfitted, seafront chalets in the hamlet of Altandhu. Big decks overlooking the sea were perfectly positioned for a post-dive pint (in the 3.5 mins between getting back and the midges descending). Beds were comfy. Each chalet even came with bucket, spade and a net for rockpooling. None of which we used because we were too busy diving. Plus brrrrrrrr. 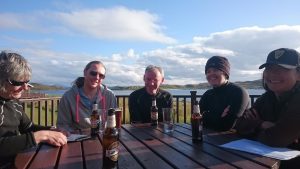 Yup – this is officially the life

Eight: UP – Octopus. Did I mention octopus? On our Fri evening briefing Andy of Atlantic Diving Services (who supplied air, a mooring, and great local knowledge) happened to mention that octopus had been seen on almost every dive recently. Needless to say, until the first one is spotted (day 2) I have eyes for nothing else. Thereafter, one or more is spotted on almost every dive. They quickly suss us out for the ogling tourists that we clearly are, and we are treated to the full range of octopus facial expressions, including ‘pissed off,’ ‘peeved,’ ‘loathing,’ and ‘disbelief.’ 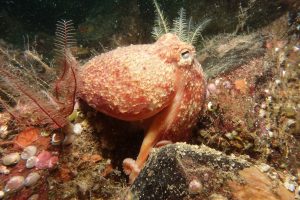 Seven: DOWN – Butter: the spreading of. Here’s a fun game – put eight Clidivers in a kitchen and challenge them all to make sandwiches for each other with no friendships being irreparably damaged in the process. Controversies include: butter, on one slice or both? Pickle, a little or a lotta? Mayonnaise??! And, what does a vegetarian have to do to get some hummus around here? Follow-up controversies include: HOW many chocolate bars did you think would be sufficient for the day?????!!!!!!

Six: UP – Lunch. Because when the preparing of induces so much angst, you sure as hell want to eat it somewhere pretty. We opt mostly for the deserted beach option, with just Yellow bobbing offshore to remind us that that the twenty-first century is still a thing (well, that and prawn cocktail crisps). Other notable highlights include: free cake at the Tanera Mor Visitor Centre, and the beach with a microclimate so extreme that a whole family were engaged in paddle ball dressed only in shorts and t-shirts, while we scrambled for woolly hats and raincoats (should have lent them the beach accessories). 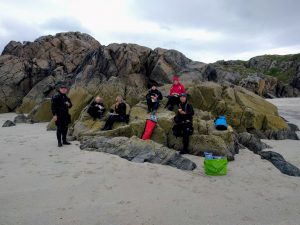 Five: DOWN – Scallops. Are delicious. Sucks to be them. No self-catering dive trip is complete without devoting at least part of one dive to hand-collecting the starter of champions. The Summer Isles was no exception to this rule.

Four: UP – Chart-reading skills. We (Neil and May) haz them. As this was Clidive’s first trip to a not-terribly-oft dived part of the world, our marks were a combination of sites recommended by Andy and sites that looked good (wall-y etc) on a chart. With only one dive out of twelve proving to be a bit meh, this system worked extremely well. We dived walls and slopes, all of which were covered with life, patrolled by hundreds upon hundreds of squat lobsters, plentiful fish-life, the aforementioned octopus and plenty more. This was ideal critter spotting territory, with highlights including highland dancers (giant sea slugs that resemble a cross between a citrus fruit and the jelly-blob of your nightmares), sea hares, an iridescent sea mouse, scorpionfish and nudibranchs galore. This wasn’t a trip for the dedicated metal-head – however our one wreck-dive of the trip was just as good as promised. The Fairweather is a trawler, sitting intact and upright on the seabed and covered, and I mean covered, in plumose anemones. The effect is like nothing so much as diving in and around a giant wedding dress. There was nary a boiler to be seen. Eight happy squidge fans at the end of every dive. 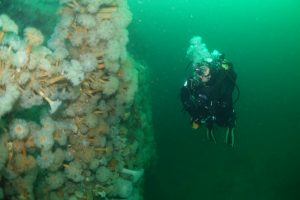 May on the fluffiest shipwreck in the world. Photo courtesy of Neil Skilling

Three: DOWN – Jurassic Park. Move over Isla Nubar (yup, I googled that), there’s a new filmset in town. Our 25 nautical mile boat journey north to Handa Island was rewarded with towering cliffs, sea stacks and caves, melodramatic waterfalls plunging off the edge and gannets and puffins galore. The scenery below the waves was just as spectacular, with all the life from just a few miles south seemingly super-sized, enormous shoals of (coley??) doing the whole ‘moving as one’ thing for our viewing pleasure, and a cheeky anglerfish to round off the whole experience. Like every good, long boat journey in this part of the world, this one also had dolphins. Lots and lots and lots of dolphins. Did I mention the dolphins? 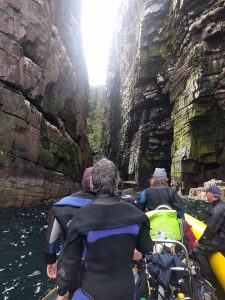 Clidive Yellow and the Temple of Doom (OK, I know, I’m mixing my movie references here)

Two: UP – The caber. See what I did there? Those of us who were not driving back spent our pre-flight rest day at the Highland Games in Lochinver. There was much tossing of cabers, and other heavy things, prize vegetables in abundance, pipes and drums and a rather mysterious fly-casting contest that none of us could quite get the point of. The chip van was out of haggis (sad times), but otherwise a very pleasant way to spend our last day. 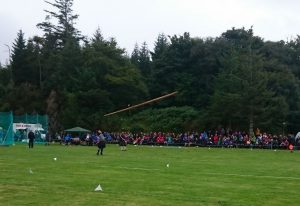 One – DOWN – Going home. Actually the weather gods (not Nick and Elaine this time) did put on the whole ‘driving winds and rain’ show on our last diving day, just to show who’s boss, and also give us a chance to test the theory that diving in an area of scattered small islands provides ample opportunity for sheltered dive-sites whatever the weather (theory proved correct – two more good dives were had). Nevertheless, and despite the promise of the bad weather setting in, packing up and heading for home was a struggle after a week of great diving, great company and some of the best topside scenery the UK has to offer. But all good things must come to an end. Before we knew it, Neil and May and Orange and Yellow were steaming south for a rendezvous with Gillian and the Farnes trip, Brian was all packed up and on his way and the rest of us were left to forlornly hoover up the crumbs of a week well spent and (in my case at least) start mentally planning the holiday time and budget for the next Scotland trip.

A RIB trip to a brand-new location at the other end of the country is an enormous organisational feat and we owe big thanks to Neil and May for making a special guest appearance all the way from sunny Perth (not the Scottish one) to run the trip. Andy from Atlantic Diving Services for air, a mooring and some great recommendations of dive spots. Also to Nick and Elaine for an epic feat of boat towing involving more three-point turns than we care to mention. And of course to the rest of the group (Brian, Chris and Rebecca) for great company, great food and great dives.