The idea of “The season” is an interesting and multi-faceted one; in Great Yarmouth, say, it is inaugurated by the hurried whitewashing of salt-rusted coastal fairgrounds and the airing of previously mothballed Kiss-Me-Quick hats; in Baja Sardinia, it’s a line in time and the volcanic sand separating flaky paint and feelings of abandonment from a mirage-given-flesh of Campari-sodas, pastel shorts and, with any luck, 3 months of non-stop bunga-bunga. Our Dive leader tells me one lunchtime that a swimming pool takes at least 48 hours to fill and indeed when we leave Baja Sardinia, the picturesque, still sleepy neighbour of billionaires’ playground Porto Cervo, there are barely two days to go before things start getting very wet indeed. Turf is laid, red carpet rolled out, lipstick liberally applied. Close to our apartments, a fortress hewn into a granite promontory is being transformed afresh into a glamorous discotheque, complete with Fritz Hansen-inspired chairs and an underlit dancefloor, overlooking water and mountains. 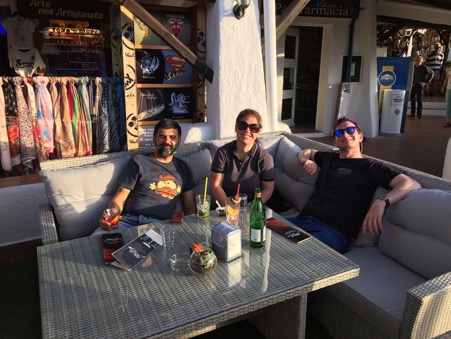 The Aga Khan purchased the area (reportedly at an undervalue) from the local people in the 1960s and developed it in the 1970s, bringing money but also a gratifyingly restrained aesthetic palette to the area. Architecture is of the Hanna Barbera school, such that one almost expects to turn a corner and see Fred and Wilma rumble up and order that car-tipping rack of ribs. Power cables are buried and development strictly policed; the overall effect being of a community relaxed and confident with its own respect of the breath-taking nature which surrounds it. You could have a really good time around here, pretending to be Roger Moore or Farrah Fawcett, for a week or two. 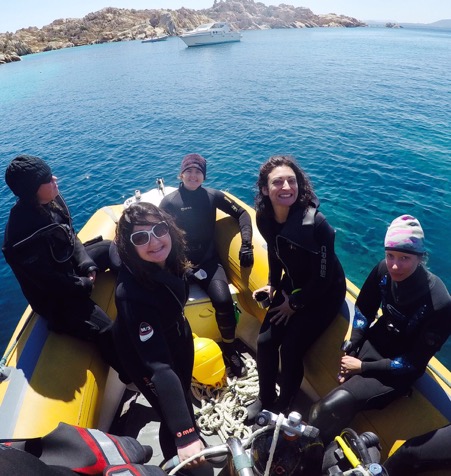 Our no less spangled crew of divers executed 8 dives over 4 days. The dives took place off an island called Caprera, which I understood was the final home to Risorgimento hero (and latter-day biscuit muse) Guiseppe Garibaldi. Like the life of Garibaldi (the man, not the biscuit), the landscape is a tale of romance. Below the water we have dramatic peaks and valleys, liberally fronded with red and yellow fan coral. One such dive has been dubbed “Monet Garden” by our hosts, and is genuinely stunning. Sea life is variegated but perhaps a little sparse, with Tuna, Barracuda and numerous crustaceans and nudies sighted. One dive – around the lighthouse-topped “Monk’s Island” – see us circumnavigating a prettily decaying trawler engine of the sort one might spot – albeit in miniaturised form – in a suburban fish tank. A water-born trip to Tahiti Beach sees your intrepid divers happen upon the final rushes of what may have been a softcore porno shoot, with obligatory superyacht circling behind the camera. Sports divers were able to progress their depth and trainee dive leaders were able to practice their skills in a comfortable and largely current-free sea. The trip unspooled itself in a relaxing fashion, with both dives in the morning, allowing for explorations, shopping and beach trips in the afternoon. 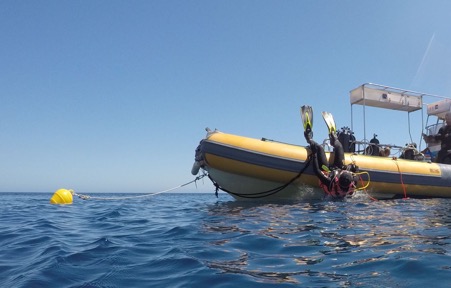 Our hosts, Proteus Diving, were nothing short of delightful. Attentive without being obsequious, informative without being overbearing, they took to the Clidivers like a fish to water, such that we end up having a banquet, complete with lashings of lethal Myrtle liquor (I’m healing nicely, thanks for asking) and many, many toasts to the health of the assembled. This lot come highly recommended. 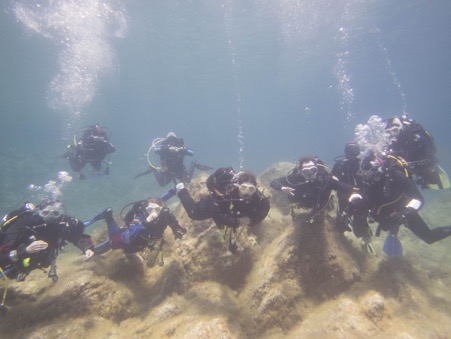 I have no doubt that Sardinia, like all islands, is replete with secrets and that with time and the right attitude, you could have a very good time discovering them, or indeed they would be amiably offered up to you. An afternoon stroll up a hill overlooking the bay reveals an impressive and very dark network of fascist tunnels, including the well-hidden barracks pictured. Equally, the guide tells of us of a crashed Messerschmitt at 74m and of schools of Grouper elsewhere. 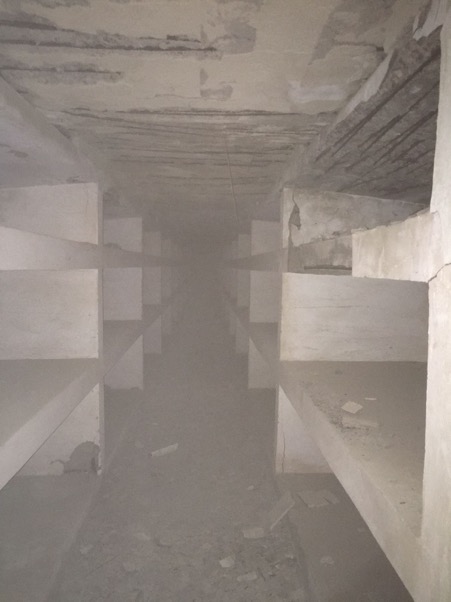 Whilst there might therefore be scope for a more challenging programme for the more senior elements of Clidive, I must say that I felt that, as a group predominantly composed of Sports Divers, has a great time here. I for one am considering going back shortly.  Thanks to Simon Ellis for organising this excellent trip!