Should we or shouldn’t we?

Clidive has had several attempts to organise a weekend diving out of West Bay on Dorset’s Jurassic Coast. Historic wrecks litter the chart, including the famous M2 submarine, the St Dunstan and the Bay Gitano, making the wreckies lick their lips in anticipation. But, while the small harbour town may be just 20-odd miles from the shelter of Portland Harbour, its exposed situation on the ‘wrong’ side of Chesil Beach make its waters undiveable in all but the most ideal conditions.

As the date neared for the latest attempt, the calm of an Indian summer was replaced by  autumnal wind and rain, and, on the Wednesday before the trip, we were contemplating having to call it off. But the winds were  forecast to be northerlies and north westerlies , which should mean some shelter close to the south-facing shore. We duly decided to take our chances and, as the East of England was whipped by gale force winds and torrential rain, we arrived on a cold but sunny, dry Friday afternoon, with the promise of blue skies ahead.

What more can a diver need? 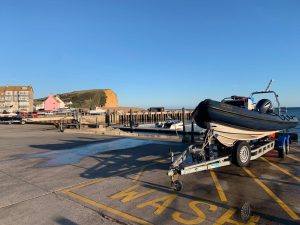 Post-washdown in the well-organised harbour

We were immediately struck by how West Bay offered the perfect environment for an easy weekend of diving. The well-organised harbour boasts a wide, easily accessible slipway, with space for trailers on one side and a clearly marked washing area (complete with extendable hose) on the other. The slip – which doesn’t dry – gives straight onto three visitors’ pontoons. Shallow, algae-free steps lead up from the pontoons to a dedicated car park, where the launch vehicle can be left for £7 a day. There’s even a shower for divers.

The friendly harbour master suggested we leave launching the boat until the next morning, which would save us money (and give us time to double-check the forecast). He also explained how the air fills would work. Yes – the harbour master runs a compressor, providing air or nitrox 7am-6pm. He even apologised for a slight technical issue which meant they could only manage to fill to 228bar rather than the usual 235… 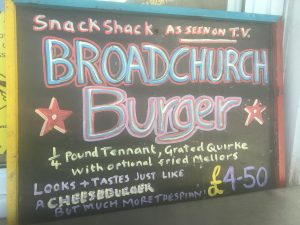 Behind the harbour master’s office is a public toilet and a row of huts serving takeaway food and drinks to the many visitors attracted to the town’s cliffs and beach, famous for their starring role in the TV series Broadchurch. Further food huts and cafes line the inner harbour, where the commercial fishing boats are moored, well away from the leisure visitors.

All of this was just a short walk from our B&B which boasted its own bar, shut due to COVID, but opened just for us each evening. Dinner can be had in The George pub or one of several restaurants. But on our first night we took the B&B’s advice and ordered a delicious Thai takeaway, which we ate in their dining room, with plates and cutlery provided.

But what about the diving, we hear you ask

The wind DID cause us some problems, as we found when we attempted to dive a wreck 7 miles offshore, only to to be forced to turn tail and make for the more sheltered waters closer to land. We also found that our lack of local knowledge made diving  the scenic sites a bit hit and miss. However, the astonishing Baygitano more than made up for this, particularly as it was relatively close to land and diveable at any state of the tide.

Read on to find out from Alasdair what made this armed collier, torpedoed  during WW1, so good we dived it twice! 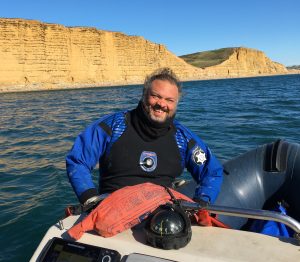 Orlando poses against the iconic cliffs of West Bay

Trips during this period are about as uncertain as it gets! We avoided the first hurdle by only having six divers signed up, which included two couples, making it possible to comply with both the Rule of Six AND social distancing guidelines. Still, just three days before the trip we were half expecting the government to announce another hurdle that would stop us going.

Once the non-existent second hurdle was passed, I checked the weather forecast which looked very windy the days leading up to the weekend. I have dived in West Bay before and faced some challenging conditions, with visibility so bad I could barely see my dive computer. The forecast looked perfectly set up for a repeat of those conditions and continued to worsen right up to the point of arrival.

The plan was to check the weather Saturday morning and then decide if we should launch from West Bay or head for Portland harbour. On Saturday morning we passed hurdle three and launched the boat from West Bay harbour. The slip was too steep for the van’s handbrake and even caused the boat to start sliding off the trailer before we could unhook the winch, but, with a bit of teamwork, we managed a successful launch.

We arrived at the dive site to find a shot close to the mark.  Nick didn’t leap at that unexpected piece of luck, but continued his plan to put our own shot down. However, just as we were preparing it another RIB arrived, confirmed the shot was on the wreck and agreed to let us use it. Soon I was descending the line and, when I reached the bottom, I realised the whole trip was a success! The visibility was excellent and the wreck was completely covered in thousands of bib, ranging from the palest silvery gold to the more familiar dark brown bands. Pollock patrolled the wreck in large numbers, with plenty of wrasse to give some variety. 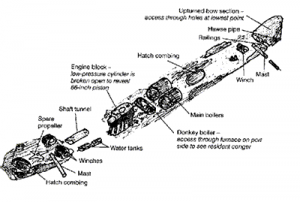 The Baygitano is large (100m long) but relatively flat, with just a section of engine block and the boilers – two main ones and a ‘donkey’ –  standing proud. However, every nook and cranny (not just the boilers) was occupied by huge congers, lobsters, edible crabs and blennies. Scallops littered the gravel around the wreck, although there were a few less after my buddy Orlando had passed through…

We were lucky enough to dive the wreck again the next morning. We had to shot it ourselves, but it didn’t take long, and it ended up in almost exactly the same position. Having a second dive on the same wreck gave us an opportunity to really explore.

All in all I feel really lucky to have dived from the club RIB in 2020 as so much was working against it. Another trip to West Bay is already being discussed!