First May Bank Holiday in Plymouth

Had a fab time in Plymouth diving the outer reefs and some great wrecks. The sun shone most of the time and with often glassy flat seas we were in for some good journeys on Clidive Yellow.

It was the first trip Warwick had dived on and marshalled since having become a father.  This change of life seems to have had the effect of making him more laid back, and he even allowed us to delay the diving for 30 minutes on the first morning – so we could take some photos for the upcoming feature on Clidive in SCUBA magazine. Fatherhood has certainly not made him any less adventurous and so the first dive was to be on Hand Deeps.  It was a gorgeous sunny day and we were at the site in 30 minutes which I think is a bit of a record and we were not going too fast. The new yellow boat is just so smooth. Good dive though the viz was a bit disappointing at only 6m.

After a quick lunch we whizzed back out again to the Eddystone and dived Anchor Alley. Strangely this was much better viz at 12m+. Jewel anemones were out in strength. Great to be back. 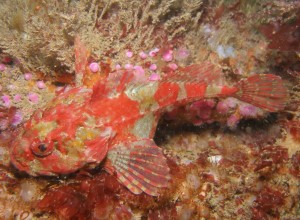 A scorpion fish on Hand Deeps

Next day we were in for a treat. Warwick let us have an 8am breakfast!  Unfortunately, this generosity was down to windy weather and he knew we were not going to get very far. We did still try for the Elk, a nearby wreck in 30m, but it was too big a swell for comfort. We headed in to the lea of Penlee Point which was pretty busy as everyone else had the same idea. Did a perfectly respectable pootle in 13m. Good viz, lots of life and a new mark for the dive directory.  The wind eased off in the afternoon so we headed for old favourite the James Egan Layne.

Wow. What a change can happen over the winter. I used to think the JEL got better every year with more life and more opened out. This year however was a shock as the disintegration seems to be accelerating. It has been battered even more than last year when part of the port side collapsed. The top is now in 9m. Some of the internal structures have disappeared and there is less above you as you are swimming inside.  Seemed a bit sad really, though it is a great dive and it was fab viz.

Hooray. The good weather is back AND we get a sleep in as we are diving the Maine and slack is essential. It’s the same distance as the Eddystone at 12 miles from Plymouth, but along the coast east towards Salcombe.  The Maine is a very pretty wreck and one of my favourites. She sits in 30m+ but you can do the dive above 25m fairly comfortably.  We headed to Challaborough afterwards as there used to be an air station and we hoped we could get some fills but it had closed down. So back to Plymouth and time for a snooze before another long journey.

Second dive was on the Eddystone on the eastern pinnacle. This is part of the reef that reaches to 8m below the surfaces and rapidly descends in steps to 30m. The plan was to drop the shot in about 15m just before the big drop off. Unfortunately the echo gave a weird blip and so we ended up chucking it in far too early, out in 30m and the buoy disappeared from sight. Luckily the water was clear and the line had been long so we could still see it about 4m below the surface. After deploying a much better placed shot, Rory, Warwick and I decided to go down the first one and put a lifting bag on it to get it back.  It was all a blessing in disguise because to land straight into 30m, in an aquarium like setting with the wall looming in front of us was really great and a different way to do the dive.

That night we were joined by Annette, Declan and baby Fenella who is delightful and is as good as gold. We took part in the Bori quiz but sadly came only 5th, two behind Saffron Walden who came 3rd.

Day 4 – Best viz below and worst viz above

Back to early starts the next day so we could fit in a third part of the Eddystone and Hatt Rock for the afternoon. We got about 7 miles off shore and had to turn back as we hit a wall of thick fog. This was again a blessing in disguise as we did the Persier, a wreck in 30m about 8 miles to the east. This was voted the best viz dive of the weekend and it was covered in fish. Everyone came up really happy.

Hatt Rock ended up being a bit of an adventure. We left Plymouth in blazing sunshine but after about 12 miles we again hit fog though this was not so bad you would turn back. We reached Hatt Rock after 17 miles and there was a hard boat there too and it was perfectly diveable. Hatt Rock is a pinnacle that is in about 60m of water with the shallowest point in 25m. It is a bit of a flat top and the dive is really all below 30m. This is such an awesome dive.  I always think it is like arriving in the top of a sky scraper and peering down into the gloom and you can’t see the bottom. The walls are thick with jewel and plumose anemones.  We saw an enormous conger resting in a crack in the rock face. It is probably a good dive to do at this time of year as at that depth it is not going to be a long dive and therefore your hands don’t get cold.

We started back to Plymouth and as we were going along the fog seemed to be thickening and the sea was also picking up. So we had to go at a slower pace and the poor viz made it a bit disorientating. The inbuilt chart plotter really comes in to its own in these circumstances – with just the compass  you are not sure exactly what point of the coast you may arrive at. The fog was thick until we reached Rame Head. It then followed us all the way into the harbour and a short while after returning we could not even see Plymouth  Hoe from Mounbatten. The journey had seemed really long, but in fact it only took us an hour. Good to know we have just bought a chart plotter for the blue boat too.

All in all a fab weekend  and thanks to Warwick for organising.  We managed to fit in most our favourite dive sites.  Alf at the Borringdon Arms and Sean and his team at In Deep were as helpful as ever and it was great to be back.